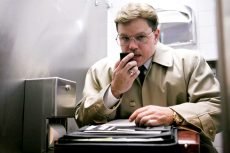 Biochemical engineer and corporate whistleblower Mark Whitacre might have been a national hero for his help in exposing international price fixing. Too bad he was also a compulsive liar and an embezzler caught up in delusions of grandeur and secret-agent fantasies. Though based on a true story, The Informant! (2009) is not The Insider but […]

The 2006 TV season treated us to not one but two shows set backstage at a late-night comedy skit show. 30 Rock (2006-2013) was the funny one created by and starring Tina Fey, the former head writer of Saturday Night Live and host of the SNL “Weekend Update.” It was also the good one and […]

The Martian (2015), winner of two Golden Globe Awards and nominated for seven Academy Awards (including Best Picture and Best Actor for Matt Damon), is the rare science fiction drama that is actually built on applied physics and engineering and organic chemistry and where survival depends on creative problem solving and teamwork across millions of miles. […]

Steven Soderbergh’s Behind the Candelabra made its world premiere at Cannes and its American debut on the small screen. A passion project of Soderbergh’s for over a decade, it was finally made for HBO on a limited budget when all the studios passed on the project (“They basically said it was too gay,” explained Soderbergh […]