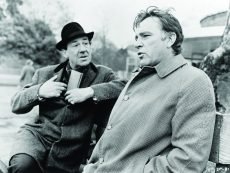 Richard Burton is Alec Leamas, a once-sturdy MI-6 agent who has become a disillusioned burn-out after seeing too many fellow agents die, in The Spy Who Came in from the Cold (1965), Martin Ritt’s superb film of John le Carré’s novel. The author was a British agent in his own right and his books were […]