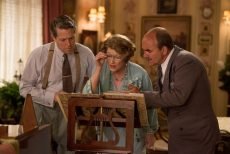 Florence Foster Jenkins (2016) may sound like a one-joke contrivance—a rich, generous, arts-loving heiress in 1940s New York City gives private recitals to a select group of high society insiders who never let on to the oblivious woman that she is quite possibly the worst singer to ever trod a stage—but it is both a […]

Mission: Impossible – Rogue Nation, the fifth film in the big-screen franchise based on the sixties Cold War spy TV series, continues to spin its alternative to the James Bond brand of espionage thriller. Like the 007 films, they are globe-hopping spectacles with spectacular set-pieces and stunts. But while each film is tethered on Tom […]