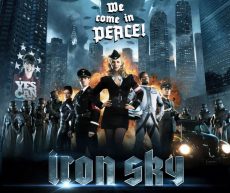 Iron Sky (Germany, 2012) is an inspired concept—Hitler escaped Germany with a cadre of Nazi loyalists and established a colony on the dark side of the moon—executed with total conviction, at least in the details. This isolated outpost lives in a steampunk world forged from the legacy of Krupp machineworks, all giant gears and pistons, […]

April and the Extraordinary World (France, 2015), inspired by the graphic novels of the great French comic artist Jacques Tardi, is a steampunk adventure set in an alternate reality Paris where the World Wars never occurred, electricity was never discovered, twin Eiffel Towers anchor a direct cable-car route to Berlin, and the smoke that powers […]

The mini-series Tin Man (2007), a radical reworking of The Wizard of Oz that is equal parts revisionist remake and dark sequel, became the most watched original program in the history of the SciFi Channel (before its rebranding as SyFy) when it premiered almost a decade ago. Our Kansas farm girl is a spunky waitress […]