Winner of the Palme d’Or at the 1984 Cannes Film Festival, Paris, Texas (1984) is the first American film where German filmmaker Wim Wenders carved his own vision into the American landscape (both physical and cinematic). Just two years after his dispiriting experience directing Hammett for producer Francis Ford Coppola, he returned to the U.S. […] 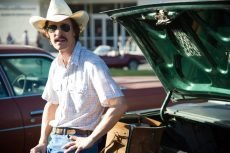 Matthew McConaughey is so good in Dallas Buyers Club (2013) that he shows up the limitations of this drama based on true events. McConaughey lost a lot weight to play Ron Woodroof, a Texas electrician and rodeo rider in the late 1980s whose reckless lifestyle leaves him with AIDS, a diagnosis this redneck homophobe denies […]

Before David Gordon Green directed the stoner hit Pineapple Express (2008) and took a turn into comedy, he was an indie filmmaker whose intimate dramas were seeped in his southern origins. Prince Avalanche (2013) brought him back to his origins with a modest, warm-hearted tale of two guys on a rural road crew, painting traffic […]