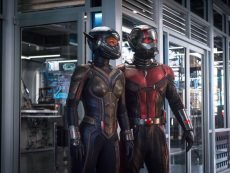 Ant-Man and the Wasp, the colorful, playful superhero reprieve from the darkness currently falling across the Marvel movies, and action spectacle Skyscraper with Dwayne Johnson in a modern towering inferno in China come home to Cable on Demand, VOD, and DVD in October to deliver the thrills. And for something a little less adrenaline-pumped, the […]

Solo: A Star Wars Story, the Star Wars prequel featuring Alden Ehrenreich as the young Han Solo, and Jurassic World: Fallen Kingdom, the fifth film in the Jurassic franchise, come to Cable On Demand and VOD in September, along with the distaff heist sequel Ocean’s 8 with Sandra Bullock, Cate Blanchett, and Anne Hathaway. But more […]

Two of the biggest movies of summer 2018 come to Cable On Demand and VOD in August: the superhero epic Avengers: Infinity War, which brings the Marvel Universe to the edge of apocalypse, and the sardonic Deadpool 2 with Ryan Reynolds. On much smaller scale is Paul Schrader’s intimate and intense First Reformed with Ethan […]

Black Panther, the superhero movie that surpassed all expectations to become one of the top ten highest grossing films ever made, is coming home in May on cable and video on demand, as well as on DVD and Blu-ray. It’s the most anticipated film in a month that includes the cold war spy thriller Red […]

Two of the most acclaimed movies of 2017 come to cable and video on demand in April: Paul Thomas Anderson’s Phantom Thread starring Daniel Day-Lewis in what he has proclaimed will be his final film performance, and Steven Spielberg’s true-life newspaper drama The Post starring Meryl Streep and Tom Hanks. Both films earned a handful […]

Battle of the Sexes with Emma Stone and Steve Carell are Billie Jean King and Bobby Riggs and IT, the Stephen King blockbuster, are coming to VOD and Cable On Demand in the new year, along with the science fiction sequel Blade Runner 2049 with Harrison Ford and Ryan Gosling. Also arriving in January are […]

Charlize Theron is the Atomic Blonde of the stunt-laden action hit of the summer and Channing Tatum and Adam Driver are the Logan brothers in Steven Soderberg’s caper film Logan Lucky, two of the summer’s most entertaining films. They make their way to cable and streaming video-on-demand in November. Also arriving in November are the […]

The summer hits continue to roll out on VOD in October, with Spider-Man: Homecoming, the third big screen reboot of the wall-crawling hero and the first to invite him into the Marvel Comics Universe of heroes, and War for the Planet of the Apes, the acclaimed third film in the series. They topline a list […]

I am Groot! Peter Quill, Gamora, Drax, Rocket, and Baby Groot are back in Guardians of the Galaxy Vol. 2, a journey to the center of the universe that adds Mantis to the team and features guest stars Kurt Russell and Sylvester Stallone. It leads off the new films coming to cable and streaming video-on-demand […]