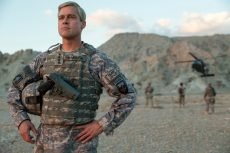 Brad Pitt is an American career officer charged with winding down the war in Afghanistan in the satirical War Machine, a fictionalized version of the non-fiction book by Michael Hastings reworked by Australian director/screenwriter David Michod (Animal Kingdom) as a black comedy of bureaucratic dysfunction and military arrogance. “At its best, War Machine crackles with […]