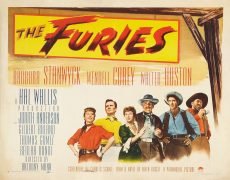 The Furies (1950), the second western from genre giant Anthony Mann (after Devil’s Doorway) and his first big-budget, large-canvas production after an apprenticeship in low-budget thrillers, is a genre hybrid: a psychological western by way of a Gothic melodrama, with a dark, shadowy style right out of Mann’s earlier film noirs. Barbara Stanwyck is Vance […]

JT Petty’s The Burrowers (2009) is another of the filmmaker’s distinctively unusual takes on a generally conventional genre. Set in the Dakota Territory of 1879, where survival is already a challenge, Petty brings a starkly unglamorized sensibility to life and mortality on the Dakota prairie: it opens with a boy come a courting to a […]