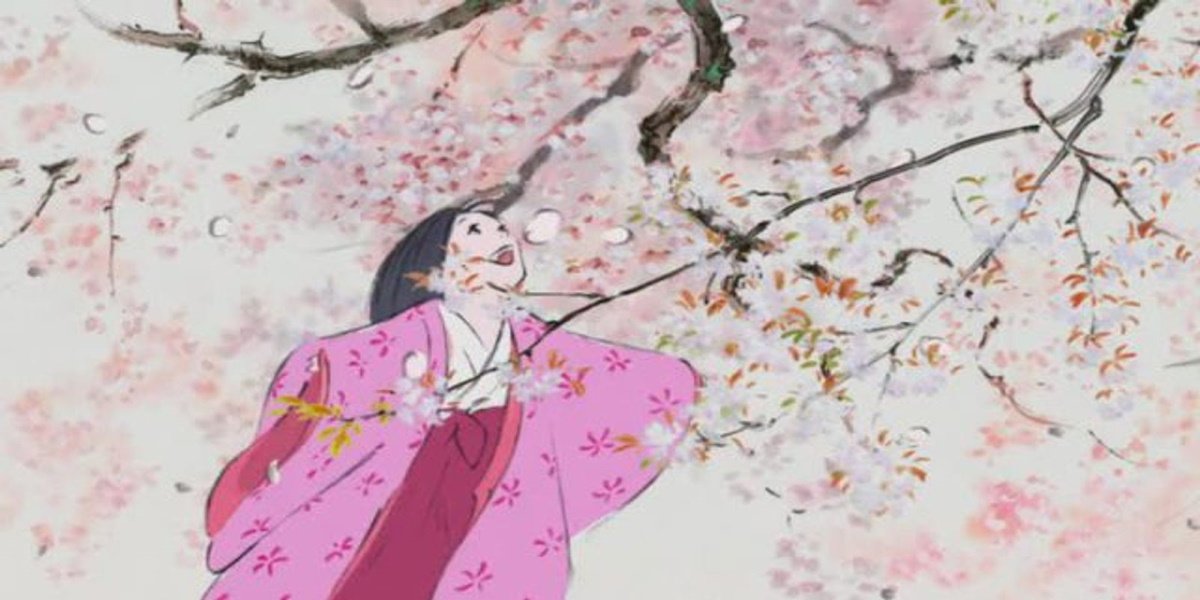 The Tale of the Princess Kaguya (Japan, 2013) is one of the Studio Ghibli masterpieces that was not directed by Hayao Miyazaki. Isao Takahata, cofounder of Studio Ghibli with Miyazaki and director of the landmark animated feature Grave of the Fireflies (Japan, 1988), commands this one with an artisanal approach to animation.

It’s a 10th-century fairy tale of a magical princess who is born of a bamboo stalk and, raised by a modest old woodcutter and his wife, sprouts to adulthood just as fast as one. As the bamboo grove gives forth with fine clothes and the riches of a royal, her adoptive father takes her from her natural paradise to a palace in the city where she grudgingly masters the arts and social graces of titled society.

Takahata embraces the sketchy, impressionistic, painterly qualities of animation being displaced by CGI. His hand-drawn imagery evokes both the watercolor and ink artworks of ancient Japanese parchment and the charcoal and pastel quality of storybook illustrations and Joe Hisashi’s score has a lyrical simplicity to match. Takahata takes time to play out his ancient fairy tale, getting sidetracked in entertaining yet ultimately inconsequential tales of royal suitors attempting to win the princess.

It’s strongest when he celebrates the simple pleasures of her life, working in a modest garden set off from the palace, running through the forest, entranced by the cherry blossoms of the young spring. And the final act is heartbreakingly lovely, a magical spectacle that whisks us through the air with a thrilling rush.

The Tale of the Princess Kaguya debuted soon after Miyazaki announced that Studio Ghibli was ceasing operations as an active producer of animated features. Its arrival came like a final gift, a handmade storybook of a film from a filmmaker who is as entranced with the texture of a brushstroke as with character and story. Thankfully Ghibli returned with additional features while this film takes its place among its loveliest achievements.

It earned an Academy Award nomination for best animated feature.

The Blu-ray and DVD editions include both the original Japanese language and English dub versions plus the feature-length documentary Isao Takahata and His Tale of The Princess Kaguya, and a news clip of the announcement of the completion of the film.