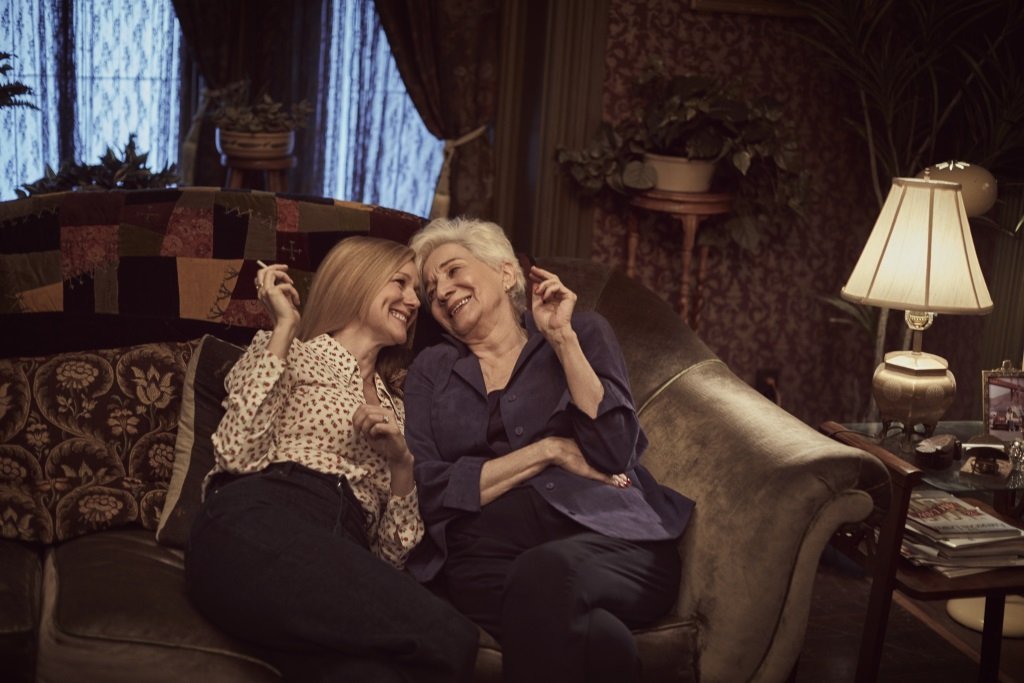 Laura Linney and Olympia Dukakis are back in San Francisco for the limited series Tales of the City (2019), the fourth series based on the novels of Armistead Maupin. In this direst sequel to the original 1994 series, Linney’s character returns after a long absence and Ellen Page leads the new cast of young characters in the show that explores the diversity of the Bay Area social culture.

“Tales from the City primarily and very sweetly works as a solid and meaty blend of fantasy and nostalgia, one director Alan Poul gently encases an ineffable charm by way of seductive frames that showcasing the city’s skyline, the dappled light of Barbary Lane’s courtyard and the joyful glow of colored lights surrounding every party,” writes Melanie McFarland for Salon.

The third season of the Emmy-winning The Handmaid’s Tale takes the show far beyond Margaret Atwood’s novel as June (Elisabeth Moss) returns to the heart of Gilead to fight for her daughter. Max Minghella, Yvonne Strahovski, Joseph Fiennes, and Alexis Bledel costar in the science fiction thriller of an oppressive dystopia in America. Three episodes now available on Hulu, new episodes arrive each Wednesday.

Charlie Booker’s Black Mirror: Season 5 consists of just three episodes (in part due to the demands of the interactive “Bandersnatch” special). Anthony Mackie stars in “Striking Vipers,” Andrew Scott is a cab driver on a mission in “Smithereens,” and Miley Cyrus is a pop star sensation with a robot doll version for fans in “Rachel, Jack, and Ashley Two.” All now streaming on Netflix.

The Amazon Original Documentary Chasing Happiness (2019, not rated) follows The Jonas Brothers as they reunite to record their first new album in six years. Streaming on Amazon Prime Video.

Foreign language pick: the remarkable animated feature A Silent Voice (Japan, 2016, not rated, with subtitles) takes on the issue of school bullying through a touching story and a nuanced cast of characters. It was a hit in Japan and received limited theatrical distribution in the U.S. Now streaming on Netflix with option of Japanese, English, and Spanish language soundtracks with subtitles.

Foreign language films include Woman at War (Iceland, 2018), an offbeat comedy about an environmental activist, and The Bastards’ Fig Tree (Spain, 2017), an allegorical historical drama set in the wake of the Spanish Civil War (both not rated, with subtitles).

In I Am Mother (2019, not rated), a science fiction thriller set in a world not too far from the robot apocalypse of “The Terminator” movies, a nurturing mechanical nanny (voice of Rose Byrne) raises a human child in a sterile underground bunker but her story of the end of mankind becomes suspect when an injured human woman (Hilary Swank) arrives. The Netflix Original film debuted at Sundance.

Penélope Cruz and Javier Bardem star in Everybody Knows (Spain, 2018, R, with subtitles), a thriller set at a family wedding in Madrid directed by Asghar Farhadi.

Netflix saves Designated Survivor, cancelled by ABC, with a third season of the drama starring Kiefer Sutherland as cabinet secretary appointed President of the United States after a terrorist attack. Kal Penn, Maggie Q, and Natascha McElhone are also back for the 10-episode season.

Cat on a Hot Tin Roof (1958), the first screen adaptation of the Tennessee Williams play, scrubbed references to homosexuality in the script, but remains a provocative film with strong Oscar-nominated performances by stars Elizabeth Taylor and Paul Newman.

Asa Butterfield stars in the romantic comedy Then Came You (2018, not rated) with Maisie Williams and the young adult science fiction romance The Space Between Us (2016, PG-13) with Britt Robertson.

Foreign affairs: woman tries to move on from sexual assault in Alles ist gut (Germany, 2018, not rated, with subtitles), which won numerous awards on the film festival circuit. Also new:

Steven Soderbergh’s Side Effects (2013, R) is a smart take on the medical drama-turned-psychological thriller with Jude Law and Rooney Mara.

True stories: Tab Hunter Confidential (2015, not rated), based on the actor’s memoir, looks at the gulf between the public and private life of the matinee idol who came out as gay in the early 2000s.

Ewan McGregor is The Ghost Writer (2010, PG-13) who uncovers a deadly secret while researching a biography of a former British Prime Minister (Pierce Brosnan) in the superb thriller by Roman Polanski (Prime Video and Hulu).

The Weekly, a half hour newsmagazine from The New York Times, comes to Hulu each Monday, a day after it debuts on the cable channel FX.

Clane Crawford stars in Into The Dark: They Come Knocking, the ninth feature-length episode of the Hulu Original horror anthology series.

Meryl Streep steals the show in The Devil Wears Prada (2006, PG-13), a comedy set in the world of high fashion and taste-making with Anne Hathaway and Emily Blunt.

Clint Eastwood’s The 15:17 to Paris (2018, PG-13) features the three American men who thwarted a terrorist attack on a Paris train playing themselves.

New on Showtime is indie drama Wildlife (2018, PG-13), the directorial debut of Paul Dano starring Jake Gyllenhaal and Carey Mulligan, and documentary XY Chelsea (2019, not rated) on the life and career of Chelsea Manning.

The Criterion Channel spotlights the films of Nicolas Roeg (Performance, 1970, The Man Who Fell to Earth, 1976) and Dorothy Arzner (Christopher Strong, 1933, Dance, Girl, Dance, 1940) and dreamy cinema of Thailand filmmaker Apichatpong Weerasethakul (Uncle Boonmee Who Can Recall His Past Lives, 2010, Cemetery of Splendor, 2015, not rated, with subtitles).

Also debuting on The Criterion Channel this month is Jan Němec’s intense holocaust drama Diamonds of the Night (Czechoslovakia, 1964, with subtitles), Souleymane Cissé’s folkloric odyssey Yeelen (Mali, 1987, with subtitles), and the not-for-kids animated feature The Plague Dogs (1982, PG-13), based on the novel by Richard Adams.