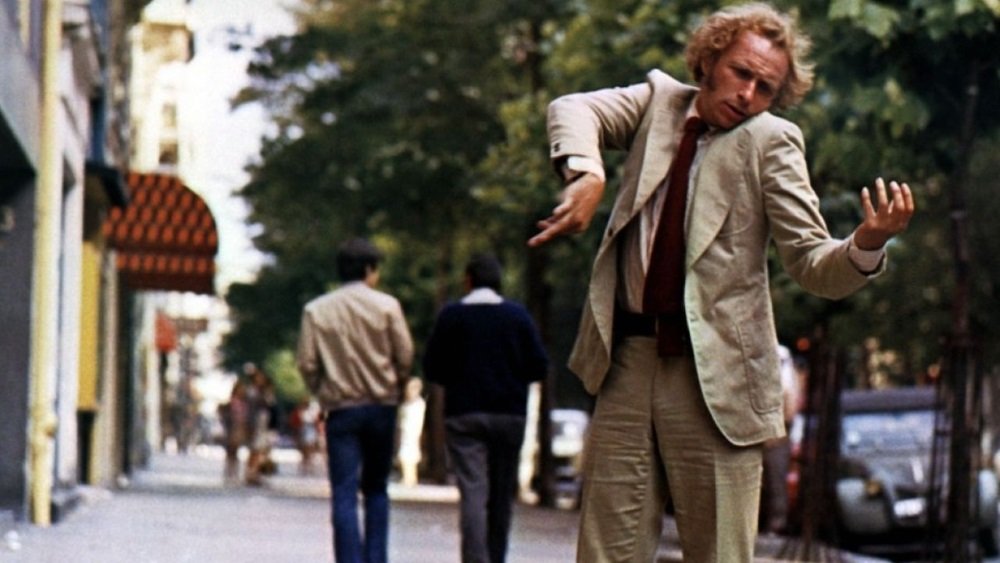 The Tall Blond Man with One Black Shoe (France, 1972) takes an idea out of Hitchcock’s North by Northwest—an innocent man is mistaken for a government agent and targeted by the enemy—and gives it cynical twist and a comic treatment closer to the Pink Panther films. When “St. Bernard” Milan (Bernard Blier), the ambitious assistant director of the French Secret Service, frames his boss (Jean Rochefort) for a sabotaged mission, the Colonel responds with a simple plan: a non-existent super-agent called in to “clear things up,” as he explains to the hidden microphones planted in his apartment. He’s a decoy, of course, but also an unwitting pawn sacrificed to the endgame. “Pick him out. A face in the crowd. As ordinary as possible. It doesn’t matter who. As long as Milan swallows the bait.” Pierre Richard is the patsy picked out of an airport crowd: François Perrin, first violin in a Paris orchestra. Milan sets his team of spies and surveillance agents to find out everything about this brilliant mystery agent.

This is the film that launched Richard from French comedy favorite to international farceur, though for all of his gifts for physical comedy he’s more of an everyman than the clownish idiot savant of later comedy hits The Toy (1976), Le Chevre (1981), and Les Fugitives (1986), all written and directed by Tall Blond screenwriter Francis Veber. Klutz he may be, he’s more amiable, innocent straight man in the eye of a spy movie hurricane than bumbling Inspector Clouseau, and director Yves Robert goes for small scenes and wry commentary over slapstick physicality. That goes for the obligatory seduction plot with resident honeypot Mireille Darc, whose dress is cut so low in the back she all but moons her target. The scene anticipates The Pink Panther Strikes Again (1976) but Richard is neither as incompetent nor a cocky as Peter Sellers’ Clouseau and his modesty and nervousness gives him a boyish integrity (despite the fact he’s been carrying on an affair with his best friend’s wife) in the midst of familiar male fantasy.

Robert’s comic choreography is superb, from the unspoken interplay of surveillance team investigating every tiny detail of Perrin’s apartment to the dance of rival agents taking one another out and hiding corpses around the oblivious Perrin while his annoying blowhard of a best friend (Jean Carmet) stumbles over every single body. The comedy is more underplayed than you might expect for a French farce and the deadpan performances (from the hangdog faces of Blier and Rochefort to the strictly business attitudes of the agents) help elevate the absurdities when civilians stumble across spycraft gaffs and interagency pissing matches. And under it all is a cynical portrait of intelligence agency ethics right out of American conspiracy films like The Parallax View or Three Days of the Condor. Milan has built a fiefdom within the department that Dr. Mabuse would envy while the Colonel has no compunction about sacrificing a civilian in the power struggle. In the face of such ruthless amorality (but for one agent with a conscience), François Perrin is the moral center of this skewed universe.

and other services. Availability may vary by service.
The Tall Blond Man With One Black Shoe [DVD]

The Tall Blond Man With One Black Shoe [Blu-ray]