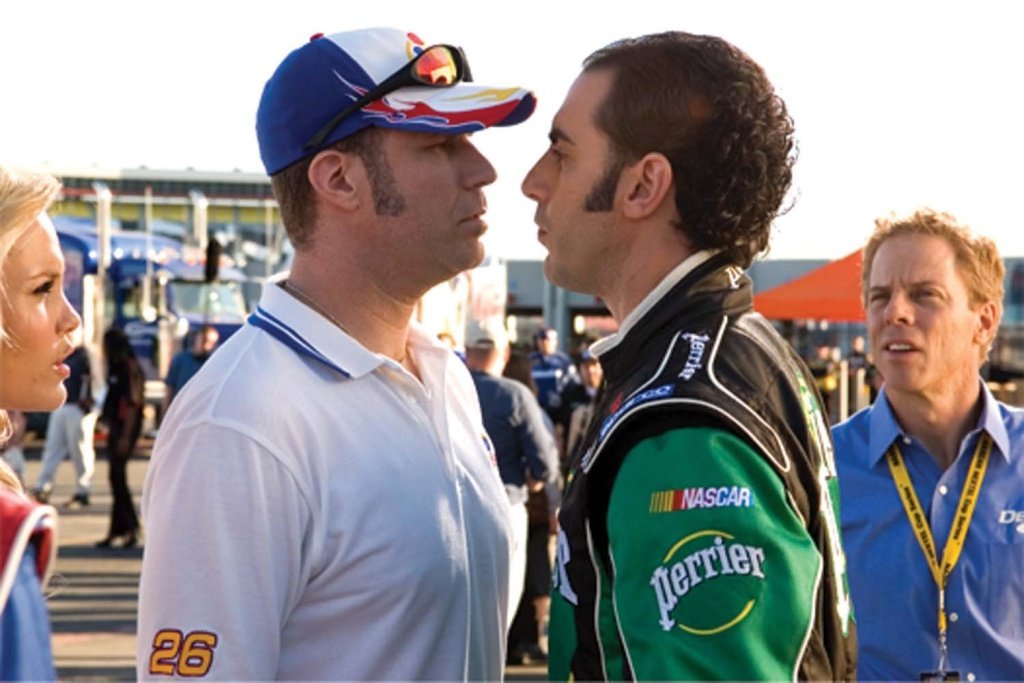 In the 2000s, Will Ferrell had an enviable run of hit comedies. To my mind, Talladega Nights: The Ballad of Ricky Bobby (2006) is the funniest of the batch.

Set in the NASCAR culture, Ferrell plays a race car driver with two first names who outraces his own intellect in a comedy that features neither a ballad nor a single night spent in Talladega. It does, however, feature John C. Reilly as the equally dim but exceedingly loyal best friend, Gary Cole as the absent father who periodically appears to gravely intone meaningless aphorisms with a beer in his hand, Leslie Bibb as his shameless golddigger of a wife, Sacha Baron Cohen as the flamboyantly gay and aggressively French champion who steals Ricky’s days of thunder, and Jane Lynch as Ferrell’s mom, who whips his bratty boys into shape with a smile.

Ferrell and co-writer/director Adam McKay (former head writer of Saturday Night Live) are as generous as can be. I’ve heard people say that Sacha Baron Cohen stole his scenes. The metaphor couldn’t be more wrong. Ferrell invites Cohen into the driver’s seat for those scenes and cheers him as he runs the track with his bent accent and rubber band expressions. John C. Reilly gets some of the best lines and the kids playing Ferrell’s bratty sons are hysterical. You’d never see Mike Meyers handing so many prime moments away; he’d just play that part, too.

There’s a tricky balance between scripted and improvised scenes, one that doesn’t always work in such comedies but clicks nicely here. Just watch the outtakes in the end credits. For some scenes, McKay seems to simply turn the camera on and let the actors go. It’s not just a matter of looking for the best laughs. It creates a chemistry that makes the film gel. You’d swear that Ferrell and Reilly are lifelong friends, so in sync they become. That leaves McKay and his editors to edit together shots from radically different takes with some cuts so mismatched that you’d swear someone was switching channels… if you weren’t laughing too hard to notice.

Ferrell’s comic reign didn’t last long and he ended up in share of flops but Adam McKay went on to direct and co-write the Oscar-nominated The Big Short. You might not see Oscar ambition in this comedy but you can see where the sense of humor that made The Big Short so effective came from.

, iTunes, GooglePlay and/or other services. Availability may vary by service.
Talladega Nights: The Ballad of Ricky Bobby [2-Disc Blu-ray]

The Blu-ray and DVD with commentary, lots and lots of deleted scenes and alternate line readings (line-o-rama), two featurettes, and mock commercials and PSAs. The two-disc Blu-ray features both the original PG-13 theatrical and the unrated extended versions of the film plus new commentary and more outtakes and deleted scenes.