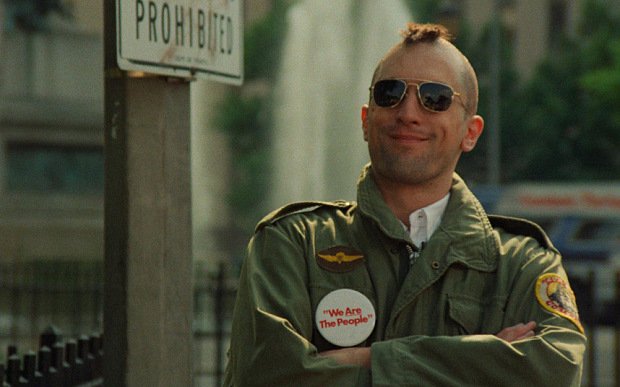 Taxi Driver (1976), Martin Scorsese’s incendiary masterpiece of alienation and anger and urban anxiety may be the most maverick vision of seventies American cinema. It is certainly one of the most visceral portraits of the American urban underbelly ever put on film, a movie bathed in blood as much as in light, and almost forty years later it still has the power sink the audience into the mind and filthy, fetid world of Travis Bickle.

“All the animals come out at night: queens, fairies, dopers, junkies, sick venal. Someday a real rain will come and wash all the scum off the streets.”

Directed by the ambitious young Scorsese, who says he was driven to make this silent scream of a script by Paul Schrader, and starring Robert DeNiro as Travis Bickle, it is a primal portrait and uncompromising vision carved out of the New York night, the summer heat, and the garbage of the Times Square cesspool. Schrader poured the script out like a catharsis over ten days of furious writing, drawing from his own spiral into self-obsessed urban loneliness with inspiration from Jean-Paul Sartre’s novel “La Naussee” (the diaries of Arthur Bremer, the man who shot presidential hopeful George Wallace, has also been identified as an inspiration but Schrader has recently said that, while he knew of Bremer, his diaries were not published until after the script was written).

Travis Bickle is no hero. He’s a pressure cooker of alienated desperation and rage who hates this existence yet is so disconnected that he can no longer relate to the people outside of his tawdry world of hookers and hustlers and the homeless. A restless, insomniac Vietnam veteran who takes a job driving a taxi on the night shift, he muses over the urban cesspool in a stream-of-consciousness narration of hateful gutter poetry. He’s convinced himself that he’s “God’s lonely man,” the self-appointed avenging angel out to clean up the garbage on the streets. When he scares off his dream girl (Cybill Shepherd), he channels his rage into plotting the assassination of a political candidate, and then redirects his pumped-up bloodthirst to saving a teenage hooker (Jodie Foster) from her pimp (Harvey Keitel in long, stringy hair).

DeNiro reads his journal entries in a near monotone voice-over, a matter-of-fact racism and homophobia and contempt for wide swathes of the human race creeping into his unexamined musings. His unacknowledged intolerance (seen in his reflexive expression of contempt every time he catches sight of an African-American on the street) becomes his excuse to unleash his anger in a violent spree under the guise of heroism and vigilante justice. And film’s final, sour irony is that the world believes his delusions of chivalry as much as he does.

Scorsese and cinematographer Michael Chapman create an almost hellish vision of New York at night as seen through the eyes of Bickle. Steam rises out of the grates and manhole covers like some primordial urban swamp (some of the street scenes were shot at slightly higher speeds, giving the steam an eerie, unreal slowness when played back) and there’s a lurid, abrupt quality to the violence, like a Weegee photo in the brutal glare of red police light, blunt and grotesque and explosive. It was shot largely on location in 1974 during a sweltering New York summer. The conditions of the shoot helped define the film, from the night shooting during a heat wave to the street shooting during the garbage strike (“everywhere I aimed the camera, there were mounds of garbage,” recalled Scorsese). It’s so visceral it you can feel the heat and grime waft off the screen.

Taxi Driver won the Palm d’Or at the 1976 Cannes Film Festival and has since been lauded as one of the great American films. Yet it received a mere four Academy Award nominations (for Best Picture, for the performances by Robert De Niro and Jodie Foster and for Bernard Herrmann’s score) and didn’t win any. Neither Martin Scorsese nor Paul Schrader were even nominated for direction and screenplay, which surely illustrates the discomfort the film caused Academy voters. The film’s more uncomfortable legacy is its link years later to John Hinkley, who became obsessed with the movie and with Jodie Foster and attempted to assassinate President Ronald Reagan in his delusion. More pointedly, Bernard Goetz became a modern day Travis Bickle when he shot and killed members of a street gang on the subway with self-righteous justification. Taxi Driver only looks more prescient in the wake of his vigilantism and the verdict of “Not Guilty” at his trial.

It remains one of the quintessential film of 1970s American cinema, a brooding blast of modern gothic cinema that boils over in madness and self-destruction. The primal portrait, uncompromising vision, vivid direction and fierce, fearless performance by De Niro has inspired countless young filmmakers and actors in the decades since.

It won the Palm d’Or at the 1976 Cannes Film Festival and was added to the National Film Registry in 1994.

Leaves Netflix at the end of September. Add to My List on Netflix

There are superb Blu-ray and DVD special editions, including a new 40th Anniversary Blu-ray with a new cast and crew reunion Q&A and commentary by Martin Scorsese recorded for the original laserdisc release of the film: one of the first commentary tracks ever recorded.

Pingback: What to watch the weekend of Friday, March 6 - Stream On Demand
Comments are closed.