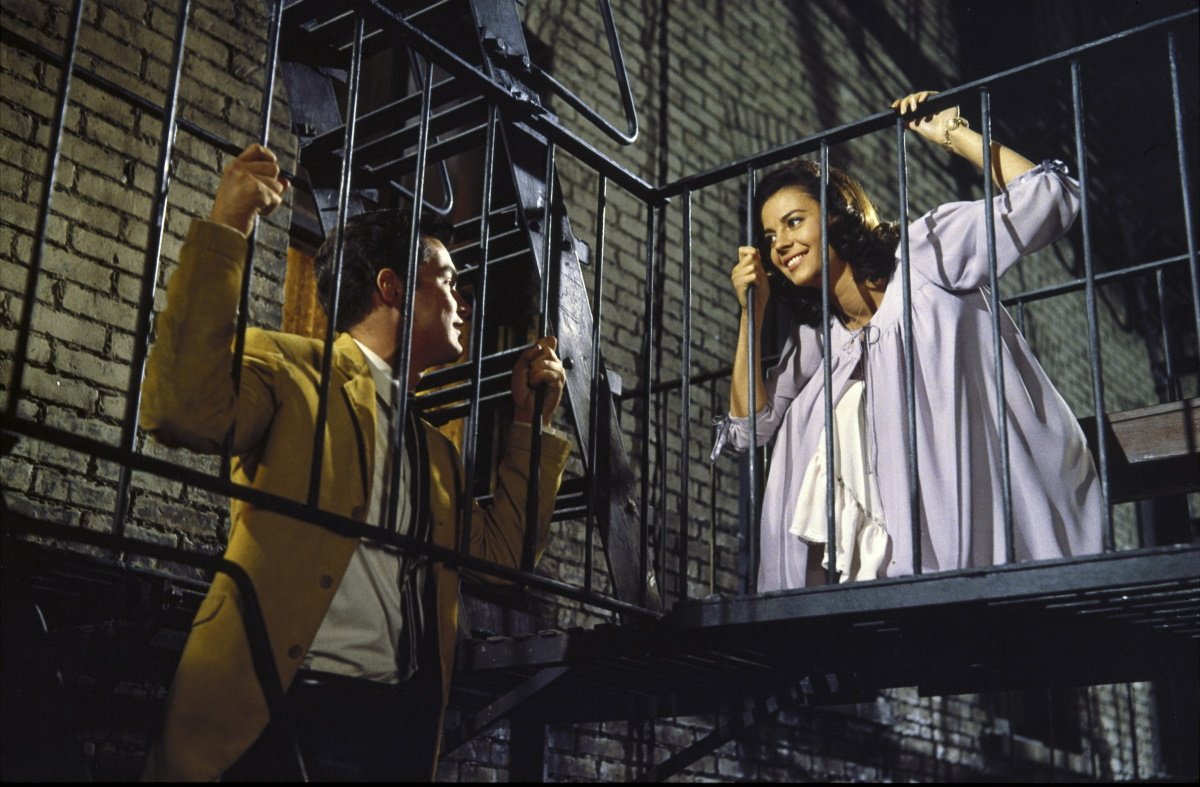 The TCM Classic Film Festival takes place at home this year on both TCM and streaming on HBO Max, which presents over 50 hosted features, dozens of short films, and scores of interviews, virtual events, and bonus featurettes from May 6-9. The opening night film “West Side Story” (1961) includes a cast reunion conversation on both services, and HBO Max offers tributes to actor Danny Glover and Oscar-winning filmmakers Steve McQueen and Barbara Kopple (among others), collections exploring the films of the L.A. Rebellion and Immigrants and America, and more. Most films feature introductions by TCM hosts (and a few from the filmmakers themselves) and bonus featurettes to provide context, backstory, or additional information, add help bring the festival experience to the showings. The programs run through the weekend. Some of the film may be available for a limited time after the festival ends but if there’s something that excites or interests you, see it over the weekend. (HBO Max)

Christopher Nolan’s high-concept thriller “Tenet” (2020, PG-13), starring John David Washington as a nameless agent on a mission to save the world, features spectacular set pieces and the most creative twist on time travel you’ve seen in the movies. Robert Pattinson, Elizabeth Debicki, and Kenneth Branagh costar this puzzle box of a mystery. It’s a plot in search of a story—there’s almost no character development to speak of—but it’s also riveting and inventive and filled with surprises. (HBO Max)

A one-hit wonder girl group from the 1990s reunites in “Girls5eva: Season 1” (TV-MA), a comedy starring Sara Bareilles, Busy Philips, Renée Elise Goldsberry, and Paula Pell as the surviving members of the quintet attempting to engineer a comeback which dealing with family, day jobs, debt, and being twenty years out of touch with the industry. It’s from producer Tina Fey and created by “Kimmy Schmidt” writer and producer Meredith Scardino. New episodes each Thursday. (Peacock)

A new comic book series is now streaming. “Jupiter’s Legacy: Season 1” (TV-MA) stars Josh Duhamel and Leslie Bibb as members of the first generation of superheroes colliding with their children (Elena Kampouris and Andrew Horton) as they rewrite the rules that guided the old school titans for the modern world. Producer Steven S. DeKnight adapts the comics created by Mark Millar and Frank Quitely. (Netflix)

A mix of World War II adventure and supernatural thriller “Shadow in the Cloud” (2021, R) stars Chloë Grace Moretz as a female officer on a B-17 bomber with an all-male crew and a top-secret package. (Hulu)

“Little Fish” (2021), a romantic drama set in near-future Seattle, stars Olivia Cooke and Jack O’Connell as lovers struggling to hold on to their identities as they lose their memories in a global pandemic. (Hulu)

Daniel Craig is 007 in “Skyfall” (2012, PG-13), which digs into James Bond’s backstory and features one of the most purely cinematic action scenes of any Bond movie. (Amazon Prime and Hulu)

“Judas and the Black Messiah” (2020, R), which earned an Oscar for Daniel Kaluuya’s performance as Black Panther chairman Fred Hampton, and dark crime thriller “The Little Things” (2021, R) with Denzel Washington, Rami Malek, and Jared Leto, are available to rent VOD. Also on DVD and Blu-ray and at Redbox. Also new:

The documentary “In Our Mother’s Gardens” (2021, TV-MA) celebrates the strength and resiliency of Black women and Black families through the relationship between mothers and daughters.

“Framing John DeLorean” (2019, not rated), a mix of documentary and dramatic recreations, stars Alec Baldwin as the maverick automaker whose rise and fall became epitome of ambition, greed, and hubris in the 1980s. Also newly arrived:

True stories: the limited series “The Sons of Sam: A Descent into Darkness” (TV-MA) follows the obsession of journalist Maury Terry to prove the Son of Sam murders were linked to a satanic cult.

International passport: an idealistic young woman joins an anti-Fascist group and slides into dangerous missions and violence in “And Tomorrow the Entire World” (Germany, 2021, TV-MA, with subtitles).

The documentary “The Boy From Medellín” (2020, R) offers an intimate portrait of Colombian reggaeton singer J Balvin as he prepares for a concert in his hometown of Medellín.

Denzel Washington earned an Oscar nomination as a self-destructive pilot with a substance abuse problem in “Flight” (2012, R). (Amazon Prime and Hulu)

From New Zealand comes “The Legend of Baron To’a” (2020, TV-MA), a folksy action comedy about the son of a wrestling legend who returns home and collides with the gangs who have taken over the small town.

The third season of the Portland-set comedy “Shrill” (TV-MA) with Aidy Bryant is now streaming.

Young twin brothers suspect that their mother, wrapped in bandages after a surgery, is actually an imposter in the psychological thriller “Goodnight Mommy” (Austria, 2015, R, with subtitles).

The superb zombie thriller “Train to Busan” (South Korea, 2016, not rated, with subtitles) wears its heart on its sleeve… along with the obligatory arterial spray and eviscerated organs.

A former assassin rouses himself from retirement when criminals assault his neighbors in the sleek action thriller “The Man From Nowhere” (South Korea, 2010, R, with subtitles).

Kid stuff: “The Iron Giant” (1999, PG) is a magnificent and sweet sci-fi fairy tale of a boy and his giant robot buddy in comic book color.

“That Damn Michael Che: Season 1” (TV-MA) is a comedy series from the “Saturday Night Live” star that uses sketches to explores topical themes.

Gary Oldman won the Oscar for best actor for his portrayal of Winston Churchill in the historical drama “Darkest Hour” (2017, PG-13).

Marion Cotillard is “The Immigrant” (2014, R) in James Gray’s powerful story of the dark side of the American Dream in 1920s New York, costarring Joaquin Phoenix.

Based on a true story, “Serpico” (1974, R) stars Al Pacino as a New York cop who fights the systemic corruption in the department.

True stories: Morgan Neville’s touching documentary “Won’t You Be My Neighbor?” (2018, PG-13) celebrates the life and legacy of Fred Rogers.

“The Bad Batch: Season 1” (TV-PG), the spin-off of the long-running animated series “Star Wars: The Clone Wars,” follows an exclusive squad of experimental clones in the immediate aftermath of the Clone War. New episodes each Friday.

“The Mosquito Coast: Season 1” (TV-MA), based on the novel by Paul Theroux, stars Justin Theroux (the author’s nephew) as an inventor and idealist who moves his family to rural Mexico. Melissa George, Logan Polish, and Gabriel Bateman costar. New episodes each Friday.

The third season of the anthology series “The Girlfriend Experience“ (TV-MA) stars Julia Goldani Telles as a college grad student in the world of London tech. Anja Marquardt writes and directs the entire season, new episodes each Sunday.

New episodes of “Fear the Walking Dead: Season 6” (TV-MA) stream every Thursday ahead of the Sunday broadcast debut.

All episodes of the limited series “The Drowning” (not rated), a British crime thriller about a grieving mother who becomes convinced that her dead son is alive, are now available. (Acorn TV and AMC+)

Criterion Channel pays tribute to “Satyajit Ray at 100” with 17 features from the richly compassionate Bengali filmmaker, from his award-winning debut “Pather Panchali” (India, 1955) to his final film “The Stranger” (India, 1991). All with English subtitles.

Also new are the exclusive streaming debuts of “Fire Will Come” (Spain, 2019, not rated, with subtitles), winner of the Un Certain Regard Jury Prize at Cannes, and Tom Noonan’s darkly comic indie “What Happened Was …” (1994, R), Grand Jury Prize winner at Sundance.