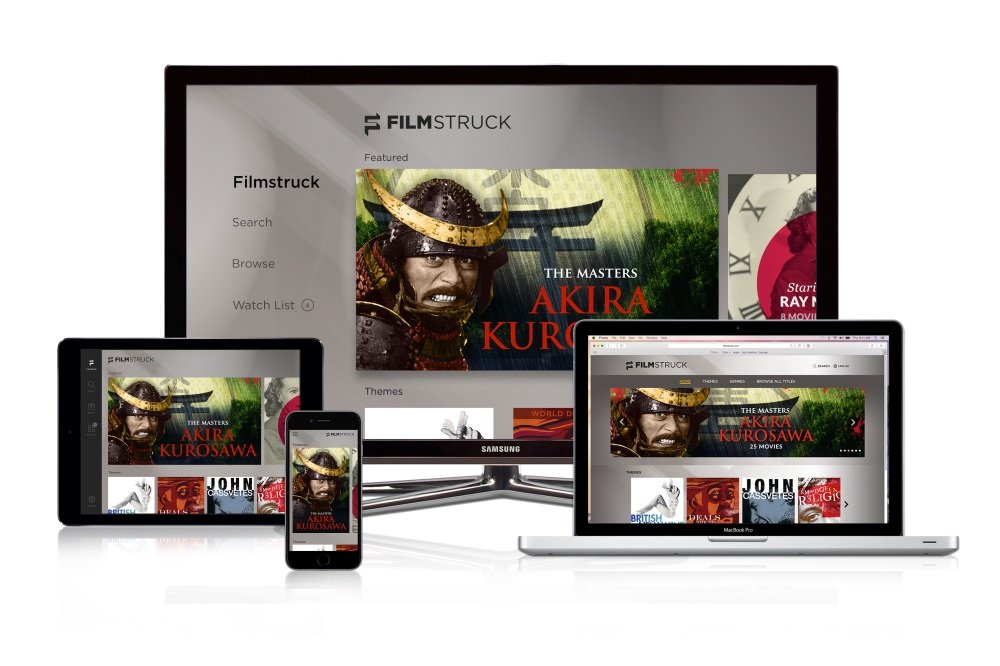 The service launches in November (delayed from the original announced date of Wednesday, October 19) with two subscription options: the basic FilmStruck subscription, which features a rotating selection of hundreds of curated films and collections as well as hosted introductions and exclusive interviews and featurettes, and the FilmStruck + The Criterion Channel subscription which adds in unlimited access to Criterion’s entire streaming library of film and special features.

And Hulu subscribers be warned: Criterion’s library leaves Hulu on November 11, at which point FilmStruck will be the exclusive streaming home of the Criterion Channel.

The complete press release is below.

Global media company Turner announced today it will launch FilmStruck, the company’s first domestic subscription video-on-demand (SVOD) service, on October 19. Developed and managed by Turner Classic Movies (TCM) in collaboration with the Criterion Collection, FilmStruck will feature the largest streaming library of contemporary and classic arthouse, indie, foreign and cult films as well as extensive bonus content, filmmaker interviews and rare footage, making it a must-have service for serious film lovers. Later this year, FilmStruck will also become the exclusive streaming home to the world-renowned Criterion Collection library, where die-hard film aficionados can gain access to the Criterion Collection’s entire streaming library through FilmStruck’s exclusive premium add-on tier, The Criterion Channel. FilmStruck will be available exclusively on Amazon Fire TV, web, iOS and Android devices at launch, and on Apple TV and other platforms and devices in the coming months.

Film fans who sign up at www.filmstruck.com can explore FilmStruck’s curated and constantly refreshed library with a special 14-day free trial. Subscriptions to FilmStruck are available in three different pricing tiers:

“Turner smartly identified a strategic way to move into the direct-to-consumer business by creating an over-the-top offering that was additive to the TV landscape, with programming not readily available in the streaming marketplace and that was completely differentiated from what TCM already offers” said Coleman Breland, president of Turner Content Distribution and TCM. “FilmStruck super-serves a niche and devoted audience of film fans and will be a strong addition to Turner’s portfolio of leading brands.”

“FilmStruck is a departure from the timeless Hollywood classics that we offer at TCM and a genuinely distinct offering for the streaming marketplace, focusing on a thoughtfully curated experience around hard-to-find, critically acclaimed, independent films from the most celebrated libraries in the world,” said Jennifer Dorian, general manager of TCM and FilmStruck. “By combining the expertise at TCM and the Criterion Collection – two of the leading authorities in film preservation and history – we have created something really special that is a must-have for passionate film lovers.”

“Joining forces with the team at TCM has been a dream come true, and we’re very excited about our new home,” said Peter Becker, President of The Criterion Collection. “FilmStruck is the first streaming platform to give movies the kind of deep, rich treatment that viewers have come to expect from The Criterion Collection, and The Criterion Channel opens up thrilling new ways for us to connect our passionate audience with the films and filmmakers they love.”

FilmStruck’s impressive library will feature a deep roster of constantly refreshed films from such celebrated indie studios as Janus Films, Flicker Alley, Icarus Films, Kino, Milestone, Zeitgeist, Film Movement, Global Lens, First Run Features, Oscilloscope Laboratories and Shout Factory, along with movies from Hollywood’s major movie studios, including Warner Bros. and Metro-Goldwyn-Mayer (MGM). Among the hundreds of critically acclaimed and award-winning titles to be featured on FilmStruck are Babette’s Feast, Blood Simple, Blow-Up, Breaker Morant, A Hard Day’s Night, Mad Max, Metropolis, Moulin Rouge, My Life as a Dog, Paths of Glory, The Player, A Room with a View, Seven Samurai, The Seventh Seal, The Unbearable Lightness of Being, Stardust Memories, The Trip to Bountiful, The Umbrellas of Cherbourg and Woodstock.

Additionally, beginning on November 11, FilmStruck will become the exclusive streaming home to The Criterion Channel, offering the largest streaming collection of Criterion films available, including classic and contemporary films from around the world, interviews and conversations with filmmakers and never-before-seen programming. The channel’s weekly calendar will feature complete Criterion editions, thematic retrospectives, live events, short films, and select contemporary features, along with exclusive original programming that aims to enhance the Criterion experience for the brand’s dedicated fans as well as expanding its reach to new audiences.

Following the same curatorial expertise as TCM, FilmStruck’s massive library will feature over 70 fully curated and constantly refreshed programming themes, along with such as exclusive bonus content as hosted introductions, originally produced pieces, interviews and rare footage. Themes include:

The Beauty of Italy – a collection of films that highlight the beauty of Italy, from the shores of the Mediterranean to the peaks of the Alps

Icon –  a bi-monthly “franchise” featuring the work of a different iconic star with each installment, beginning with legendary actors Marcello Mastroianni and Ingrid Bergman

To provide additional historical context to films, franchises and themes, FilmStruck will feature hosted introductions from film critics, actors and more, including: