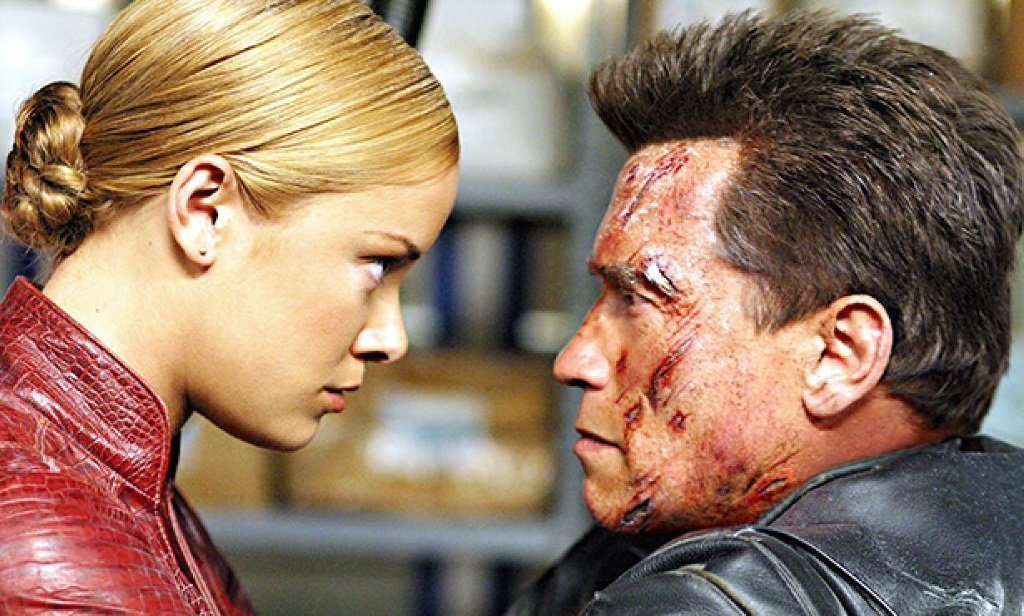 Arnold Schwarzenegger’s old, obsolete Terminator is back in black in Terminator 3: Rise of the Machines (2003). Black leather, that is, as well as his trademark dark glasses and mono-syllabic punchlines.

He may be machine, but he’s got the spirit of a human whirring inside the gearbox as he plays tough-love father figure to John Connor (now grown up to become scruffy, haggard Nick Stahl) and a reluctant bystander (Claire Danes) destined to play a role in the future of mankind. The new Terminator TX (Kristanna Loken) looks like she’s stepped out of The Blue Lagoon but this instant fashion maven has the rudimentary emotional range of a calculating femme fatale—burning drive, cold malevolence, smirking satisfaction—and a veritable Swiss Army Knife of goodies: Inspector Gadget in the guise of a Victoria’s Secret mannequin.

Director Jonathan Mostow delivers an impressive display of property damage in his first signature scene, a battering chase with a small platoon of riderless cars and a barreling construction crane that practically levels a neighborhood, and continues in the same vein throughout the film. But where Terminator creator James Cameron transformed previous man-versus-machine duels into show-stopping spectacle, Mostow favors momentum. He powers through his set pieces with such speed that you rarely notice (or just don’t care) when the plot and the characters fail to connect. (It makes you wonder if the script was whittled down from a Cameron-sized epic to a lean, swiftly paced doomsday rollercoaster when Cameron passed on the project.)

It lacks the mano-a-machino grit and grungy gut-punch of the original down-and-dirty classic, and the eye-popping effects spectacle and epic action movie ambition of T2: Judgment Day, but amidst the comic book supe-operas dense with psychological torment, guilt, and sprawling running times, the narrative efficiency of T3 is not just commendable, it’s refreshing.

, iTunes, GooglePlay, Vudu and/or other services. Availability may vary by service.
Terminator 3: Rise of the Machines [Blu-ray]

Terminator 3: Rise of the Machines [DVD]