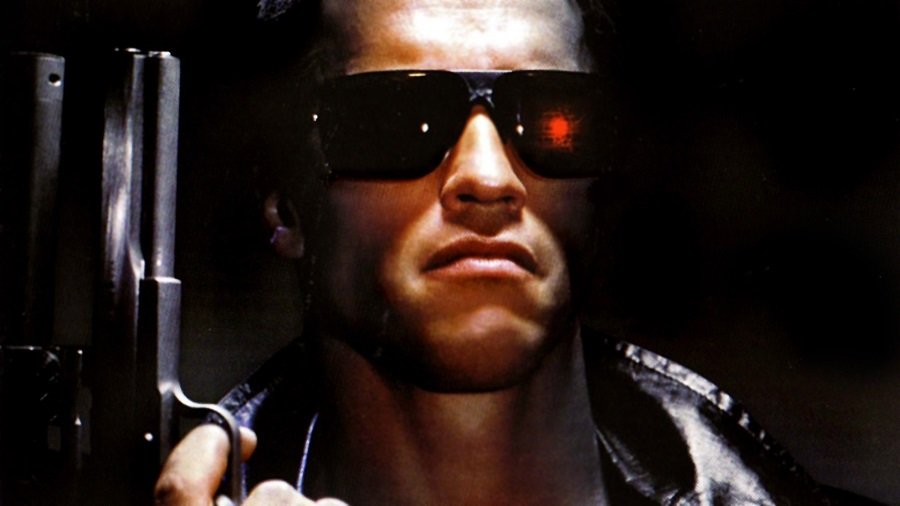 After the underwhelming sequels to James Cameron’s hard-wired hardware time travel thriller The Terminator (1984) since he left the franchise, it’s time to remind ourselves just how tight and clever and entertaining the original film was.

Made for a mere $6 million and released in the fall of 1984 by a small independent sudio to instant success, what could have been a drive-in film right out of the Roger Corman playbook became a pop culture classic. It launched the filmmaking careers of Cameron and producer Gale Ann Hurd and it gave star Arnold Schwarzenegger serious action movie star credentials and jumpstarted his foundering Hollywood career.

Schwarzenegger plays a cyborg from the future sent back to 1984 to kill the hope of the future (Linda Hamilton). Michael Biehn is the twitchy, haggard human who risks all to save her and he runs through the film with the over-amped desperation of a paranoid schizophrenic on his 12th cup of espresso. Curiously enough, Arnold Schwarzenegger was not initially offered the title role but the part of the human hero, Reese. Cameron had written the cyborg part with Lance Henriksen in mind but when he met the actor, they both became intrigued by the possibility of Schwarzenegger as the Terminator himself and had to convince both Schwarzenegger’s agent and the studio to take a leap of faith.

It was quite possibly the smartest decision ever made by Arnold in his Hollywood career. He transforms the rampaging robot killer into an unstoppable juggernaut. Schwarzenegger’s size makes him a veritable sci-fi Golem in black leather, a badass who looks human and moves like a robot: deliberate, daunting, a tank on two legs. His dialogue is minimal and his accent, at the time a hurdle in his career, actually worked in his favor. The combination of blank expression, emotionless baritone voice, and physical directness with an accent that rings just out of place in urban America made the character’s familiar line, “I’ll be back,” into a trademark for the actor.

The Terminator is a dynamic entry in the dark subgenre of science-fiction dystopias that had been redefined in the eighties with Blade Runner and The Road Warrior. The barreling pace and visceral action recalls the latter and the nocturnal setting and “tech noir” stylings echoes the influence of the former, but the contemporary milieu, the clever script and low-budget ingenuity, and Cameron’s own sensibility gives the film an identity all its own. Cameron gave the film a dark, grungy look, dominated by night scenes and pounding action, and the effects followed suit, creating a vivid world on limited resources. And he doesn’t bother to stop the film for explanations. After minimal set-up, he simply has Reese shouted out exposition in the heat of action scenes, explaining the history of the future to Sarah Connor while on the run for their lives, and then lets the images and action fill in the rest. Cameron punctuates the tension and the action with witty flourishes and moments of black humor.

The grungy little low budget sleeper looks even more primitive next to its sleek mega-budget sequels, and perhaps that’s why I’ll always prefer this scrappy, smart little drive-in action noir over the polished high-tech special effects rollercoaster sequels. Terminator 2: Judgment Day pushed the boundaries of movie special effects when it was released seven years later, but the original The Terminator was a triumph of energy and ingenuity over budget.

It was added to the National Film Registry in 2008

, iTunes, GooglePlay, Vudu, and/or other services. Availability may vary by service.

On Blu-ray and DVD in various editions, including box sets. The initial DVD special edition features “Other Voices: Creating the Terminator” is a 60-minute in-depth documentary directed and produced by Van Ling and featuring new interviews with most of the key cast and creative personnel, including Cameron, and some amazing behind-the-scenes peek at the special effects. They did an amazing job with limited resources and even today they look pretty cool and very imaginative if not always “realistic.” You also get an idea of Roger Corman’s influence on the film, as much of the crew trained on Corman’s New World productions. “The Making of The Terminator: A Retrospective” is an 18-minute featurette from 1992 composed entirely of interviews with Cameron and Schwarzenegger, sometimes in conversation, sometimes apart. There is also a gallery of deleted scenes with commentary by director James Cameron (appropriately called “Terminated”), storyboards, hidden menu features (aka an Easter Egg hunt), DVD-ROM supplements, and original trailer and TV spots.

Pingback: Arnold Schwarzenegger is the original 'Conan the Barbarian,' now on Netflix - Stream On Demand
Comments are closed.