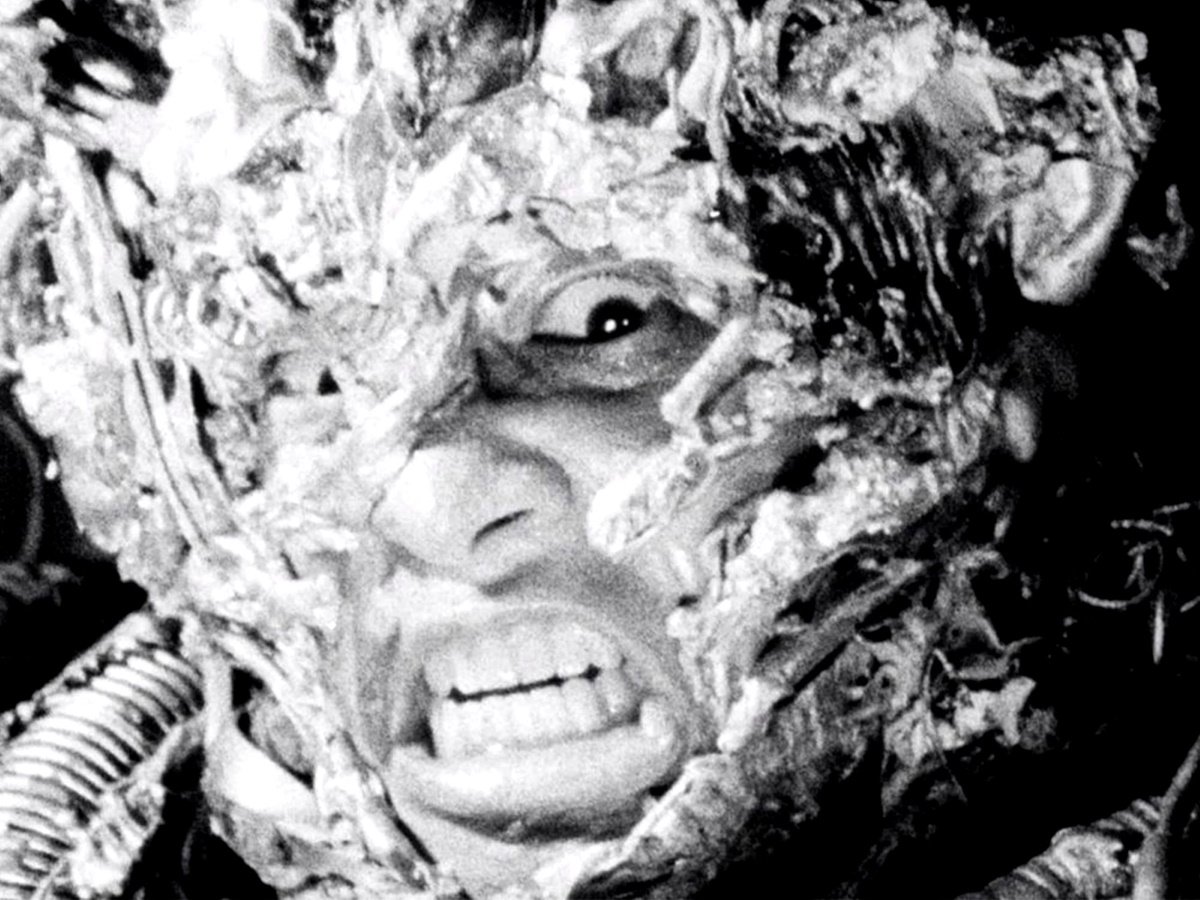 In Tetsuo: The Iron Man (Japan, 1989), Shinya Tsukamoto draws on the marriage of flesh and technology that inspires so much of David Cronenberg’s work and twists it into a manga-influenced cyberpunk vision.

A man (Tomoroh Taniguchi) wakes from a nightmare where his body helplessly fusing with the metal objects around him, only to find it happen to him in real life… or is it? Haunted by memories of a hit and run (eerily prophetic of Cronenberg’s Crash), this ordeal could be a dream, a fantastic form of divine retribution, or perhaps technological mutation born of guilt and rage.

Shot in bracing black and white on a small budget, Tsukamoto puts a demented conceptual twist on good old fashioned stop motion effects and simple wire work, giving his film the surreal quality of a waking dream with a psycho-sexual edge (resulting in the film’s most disturbing scene). The story ultimately takes on an abstract quality enhanced by the grungy look and increasingly wild images as they take to the streets in a mad chase of technological speed demons.

This first entry in his self-titled “Regular Sized Monster Series” is followed by a full color sequel, Tetsuo II: The Body Hammer (1992), which trades the muddy experimental atmosphere for a big budget sheen but can’t top the cyber-shock to the system this movie packs. This is horror film for the modern technological world.

Not rated, in Japanese with English subtitles, black and white.

Also on Blu-ray and DVD and on SVOD through Amazon Video, iTunes, GooglePlay, Vudu and/or other services. Availability may vary by service.
Solid Metal Nightmares: The Films of Shinya Tsukamoto [Blu-ray]
Tetsuo: The Iron Man [DVD]

Arrow Video presents the film on a Blu-ray collection of eight features by Shinya Tsukamoto. The addition seven films are: Tetsuo II: Body Hammer, Tokyo Fist, Bullet Ballet, A Snake of June, Vital, Kotoko, Killing, The Adventure of Denchu-Kozo, and Haze. The four-disc set include commentary on all eight films, new and archival featurettes, and new and archival interviews.

The DVD release from Tartan, which includes an interview with Tsukamoto and clips from his other films, is long out of print.