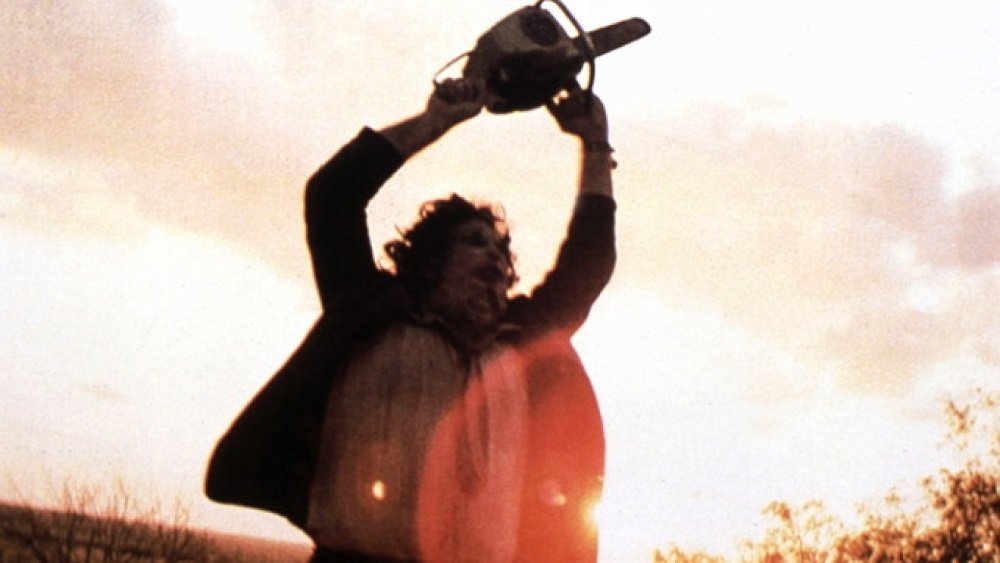 The saw is family in Tobe Hooper’s brutal, brilliant debut The Texas Chainsaw Massacre (1974) a grungy, grisly horror about a perverse Texas cannibal clan (inspired by the story of Ed Gein) and the teenagers who wander into their home (decorated in furniture constructed from human bones) and wind up on their meat hooks and in their freezer.

Shot in the cheap with a primitive look that belies the craft put into it, the film earns its garish title and notorious reputation, notably with the almost pure savagery of the film’s poster-boy Leatherface (Gunnar Hansen), the devoted mute son who wields the chainsaw under a mask of human flesh. It’s unrelenting and unforgettable and its raw gore remains its strongest element. Along with Night of the Living Dead and The Last House on the Left, it ushered in the modern age of horror in the 1970s. It is one of the great transgressive American horrors and is still the film upon which Hooper’s reputation is built.

A grunge classic in its own right, with sweltering, sunburned color, gloomy interior darkness, and its own atmosphere of Southwestern Gothic, The Texas Chainsaw Massacre was shot on 16mm film and blown up to 35mm for theaters. That grunginess is part of the experience.

The film was remastered with a 4K digital transfer from the original 16mm negative for the 40th anniversary , which preserves the texture of film without turning the film grain into a digital grainstorm. If you’ve never seen the film, or are ready to revisit it, this is the best version you’ll find in streaming form.

The Texas Chain Saw Massacre: 40th Anniversary Collector’s Edition is a four-disc set with the feature and commentary tracks on both Blu-ray and DVD discs, plus a bonus disc in each format with additional exclusive supplements.

Anchoring the bonus disc is a pair of feature-length documentaries carried over from the previous Blu-ray and DVD special editions: the 73-minute “Texas Chain Saw Massacre: The Shocking Truth” and the 74-minute documentary “Flesh Wounds: Seven Stories of the Saw.” Also carried over from earlier releases are “A Tour of the Texas Chain Saw Massacre House with Gunnar Hansen (which offers before and after walk-throughs), “Dr. W.E. Barnes Presents ‘Making Grandpa’,” an interview with co-star Teri McMinn (the girl on the meat hook and in the freezer), deleted scenes and outtakes, a blooper reel, and outtakes from “The Shocking Truth.” All of the archival extras are in standard definition except the Teri McMinn interview, which was originally shot for film’s Blu-ray debut.

New to this edition are: “The Business of Chain Saw: An Interview with Production Manager Ron Bozman,” who gets into the tangles of legal complications and disputes following the film’s release in addition to stories from the shoot; “Grandpa’s Tales: An Interview with John Dugan,” the actor who played Grandpa; and “Cutting Chain Saw: An Interview With Editor J. Larry Carroll,” which looks at the post-production process as well as more stories of shooting in the Texas heat; the 2006 “Horror’s Hallowed Ground: Texas Chain Saw Massacre” with Sean Clark taking a video tour of shooting locations; plus a new collection of previously unseen deleted scenes and outtakes (shown without audio). Most (but not all) of these new supplements are HD.