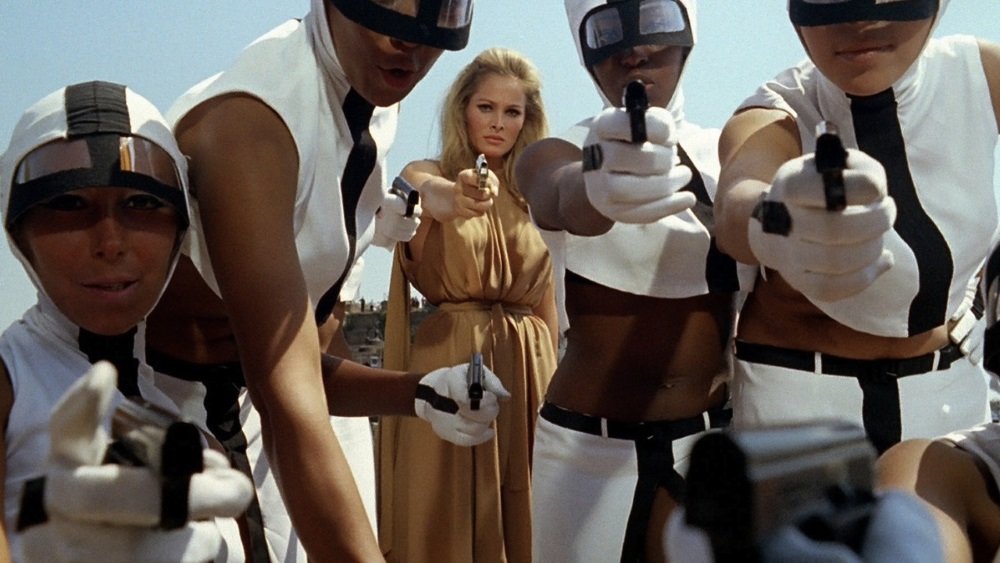 Before The Hunger Games, before Battle Royale, before The Running Man, there was Elio Petri’s The 10th Victim (1965), the original Survivor set in a near future of unlikely fashions and pop-art stylings, where comic books are the literature of the day, murder games have become the dominant form of media entertainment, and war has been replaced by “The Big Hunt.” The bored, the ambitious, and the just plain violent can sign up for a deadly game of cat and mouse with fatal consequences and the rest of the world watches the body count on TV.

It’s ostensibly “a safety valve for humanity” but Petri’s wry perspective reveals the activity as less primal scream than the logical evolution of today’s reality TV fad. The hunter is given a target and the victim has to be on guard to pick out a potential assassin from the crowd. These games don’t play out in a controlled arena but in the streets and sometime in the nightclubs of the real world, where the occasional civilian becomes collateral damage, and where other murder game movies are prisoner cage matches, this game is completely voluntary. No surprise, there’s no shortage of competitors. The lure of celebrity, prize winnings, and endorsement deals apparently trumps survival instinct. Or maybe it’s just a matter of a population so narcotized into numbness that they jump at anything that can offer them a sensation outside of their consumer bubble.

Marcello Mastroianni is womanizing Italian reality TV darling Marcello, a celebrity playboy without money in a world of consumer conformity, living in a state of perpetual debt with an impatient, hostile mistress (Elsa Martinelli) and a spiteful ex-wife (Luce Bonifassy) still living off his winnings. Marcello is blasé and bored, planning his kills as if a mastermind from a James Bond movie (complete with a peroxide job and all-black wardrobe) and smirking with a sour satisfaction when his ingenious booby trap takes out his first victim, a strutting German aristocrat whose arrogant airs and Prussian military precision carries the air of Nazi officer. It’s almost like something out of a Monty Python sketch.

Ursula Andress is Caroline Meredith, an American Amazon from Hoboken with a double-barrel wardrobe as deadly as it is chic. The reigning champ with nine kill to her name, she’s a veritable warrior of a competitor who uses sex to get close to her (invariably male) targets. On the surface Marcello (the titular 10th victim) seems an easy mark for her charms but he’s as savvy a competitor. What he lacks in gladiatorial skill he makes up for with instinctive suspicion and a flair for sneaky surprise attacks. They’re made for each other, which is a problem since they are trying to kill one another.

Death is played for laughs, an exaggerated spectacle bordering on the ridiculous, and the romance isn’t very convincing, but then Petri doesn’t seem to take any of it seriously. In fact, he’s lampooning Italian cinema and TV as much as anything else. Alienation in the modern world was a dominant preoccupation of European cinema of the sixties but Petri trades the bloodless ennui of Antonionni for a comic book take on Fellini gone ballistic, with Mastroianni beneath a peroxide blond job and sunglasses playing the disaffected social pretender of La Dolce Vita as a hustler who turns to the hunt when his profits as a sunset cult high priest starts to slip.

There’s chauvinistic marriage gags and battle of the sexes games out of a sixties Italian sex farce, with Mastroianni bringing the conniving, chauvinistic arrogance of Marriage, Italian Style and Yesterday, Today and Tomorrow (also, not coincidentally, produced by Carlo Ponti) to a world where spontaneous shoot-outs are an inevitable form of romantic spat. There’s spy movie spoofing, with original Bond girl Andress packing firepower in a tinsel bikini and giving a go-go floor show as part her assassination showmanship. And there’s a broad lampoon of a mercenary consumer culture, with advertisers competing to sponsor the climactic shoot-out and get their product placement in the final, government-sanctioned murder.

The 10th Victim is the godfather of the death game movie even more than The Most Dangerous Game, the first film to make manhunt a form of sport. But that was a private sort of endeavor, a madman’s show of power. This is all about public spectacle, a modern form of bread and circuses as a fatal game show. Give the people what they want.

One last note: among the many films that The 10th Victim influenced is Austin Powers: International Man of Mystery. Along with tributes to the crazy costume design, the Mike Myers-fronted band that pops up through Austin Powers like a Laugh-In gag break is named after the sponsor that turns the last kill in The 10th Victim into a song-and-dance-filled TV commercial: Ming Tea.

and other services. Availability may vary by service.
The 10th Victim [DVD]

The Blue Underground edition on Blu-ray and DVD includes the featurette “Marcello: A Sweet Life” and galleries of stills and posters.