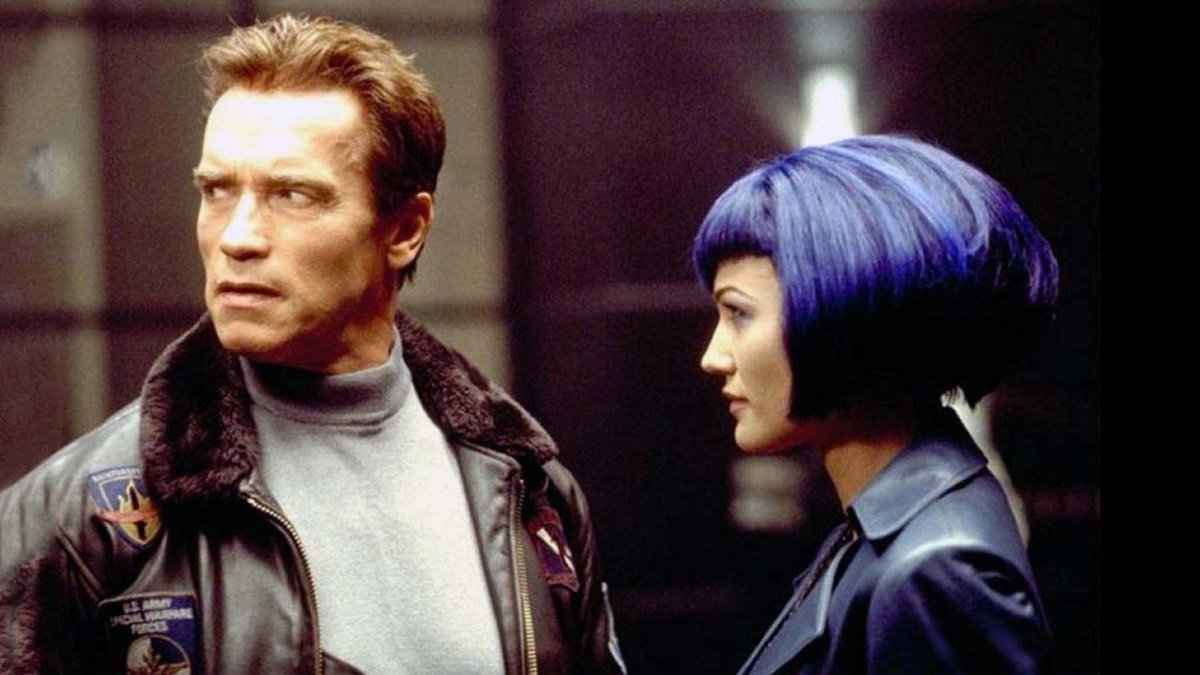 Arnold Schwarzenegger plays a stiff but amiable family man thrust into the center of a cloning conspiracy in The 6th Day (2000), an adrenaline powered sci-fi thriller set in “the near future: closer than you think.”

Adam is a blue-collar entrepreneur made good at first, genial if clumsy in domestic scenes whose stiffness only melts when the script lets him get playful. And then he comes home to his surprise birthday party only to discover he’s already blowing out the candles! Due to a conspiratorial snafu, there’s two Adams running around and one of them is a clone, perfectly reproduced right down to his memories. Talk about your identity crisis.

Since cloning humans is illegal, he’s inconvenient evidence, on the run from a quartet of colorful killers (including Michael Rooker and Sarah Wynter) sent by oily corporate sleaze Tony Goldwyn, a CEO with a (literal) God complex. Just to up the ante, a fanatical anti-cloning religious fundamentalist assassin joins the merry chase.

The sudden transformation from stiff but amiable family to gleefully bloodthirsty one man army spitting out pithy one-liners as he leaves a trail of mangled bodies behind him is alarming, or rather it would be if it was anybody but Arnold. Whether purposely subversive or merely an automatic deference to Arnold’s screen history, it adds a vicious twist to the film.

Director Roger Spottiswoode is a thoroughly professional cinematic mechanic, executing action scenes with verve and flash and driving the picture with enough momentum to leap the logical gaps (which, to be fair, are few). The original screenplay is steeped in dark future-shock themes that appear cribbed from the works of Philip K. Dick, whose stories inspired such movies as Blade Runner, Total Recall, and Minority Report. It bandies about issues of identity and immortality and technological morality while Spottiswoode tosses futuristic gadgetry around the edges with tongue-in-cheek satire (love that creepy android Cabbage Patch Doll from Hell).

The 6th Day never rises to the promise of this undercurrent, but then who expected it to? Spottiswoode and Schwarzenegger deliver a clever and colorful conspiratorial thriller with high-energy action scenes, car crashes a go-go, spectacular technology, and big explosions, packaged up with ferocious glee and spoofing humor. Who could ask for more from Ah-nold?

Also on Blu-ray and DVD and on SVOD through Amazon Video, iTunes, GooglePlay, Vudu and/or other services. Availability may vary by service.
The 6th Day [Blu-ray]
The 6th Day [DVD]

The special edition Blu-ray and two-disc DVD set features commentary by composer Trevor Rabin with isolated music score, a collection of featurettes, and storyboard comparisons among the supplements.