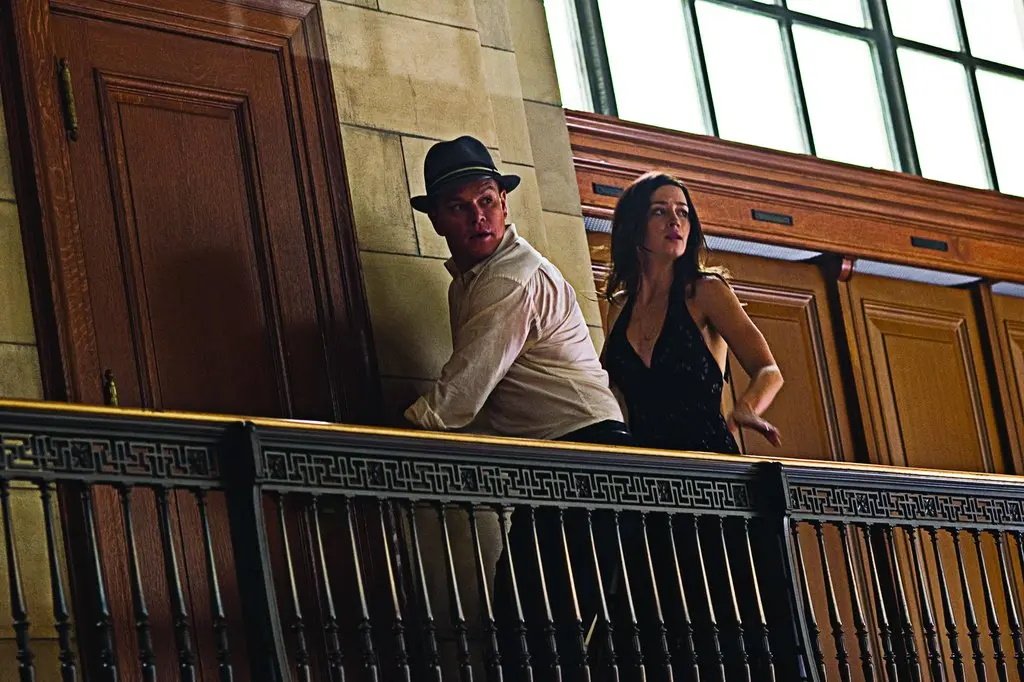 A cabal of mysterious men are responsible for keeping the fate of the world on track according to The Adjustment Bureau (2011), a science fiction romantic thriller based on, or more accurately inspired by the short story “Adjustment Team” by Philip K. Dick.

Matt Damon stars as the likable hero David Norris, an underdog political hopeful undone by his past mistakes, and Emily Blunt is appealing as Elise Sellas, a modern dancer with her own impulse issues. They meet cute (in the men’s room, where it turns out they are both hiding out), she inspires him, and the adjustment bureau goes into action to unravel the “damage” of a love affair that blossoms when they fail to intercept another chance meeting.

The men in black here are men in gray suits and matching hats, like they’ve stepped out of the sixties-set series Mad Men (in fact, Mad Men costar John Slattery leads this team and he doesn’t appear to have altered his TV wardrobe in least). They are charged with rewriting the narrative of our lives: changing bad decisions, repairing mistakes and erasing the evidence of their intrusion. Kind of like moving the furniture around while we’re not looking and then convincing us it was never otherwise, and all for our own good.

David and Elise, however, are having none of it. They choose free will over predetermination and go on the run to create their own future with the men with hats in pursuit. It’s kind of cool as they leap all over New York City through doors that, for them, open up to shortcuts across town (it’s all in the hats, I tell ya), and it makes for a lively climactic chase and a whirlwind tour through the Big Apple, which is photographed to striking effect by cinematographer John Toll.

It’s a fun premise and one of the more playful bits of Big Brother paranoia in the canon of PDK, whose ideas are as endlessly borrowed by Hollywood as they are misunderstood. Or ignored. By the time writer/director George Nolfi is done with his adaptation, all that’s left is a premise for a romantic adventure about how the power of love overcomes the near-magical interference of God’s secret service detail. What sustains the film is the handsome location shooting and the chemistry between the very photogenic leads.

Anthony Mackie plays one the men with hats, Terence Stamp is a “senior advisor” for the Bureau, and political advisors James Carville and Mary Matalin appear as themselves.

The DVD and Blu-ray releases feature commentary by director/screenwriter George Nolfi, three featurettes, and six deleted/extended scenes which reveal a character who was edited entirely out of the film. Exclusive to the Blu-ray is “The Labyrinth of Doors,” an interactive map of New York that invites the viewer to follow the paths of the doors and offers various behind-the-scenes clips. Unlike a lot of the gimmicky interactive supplements tossed onto Blu-ray discs, this one is both fun and revealing.