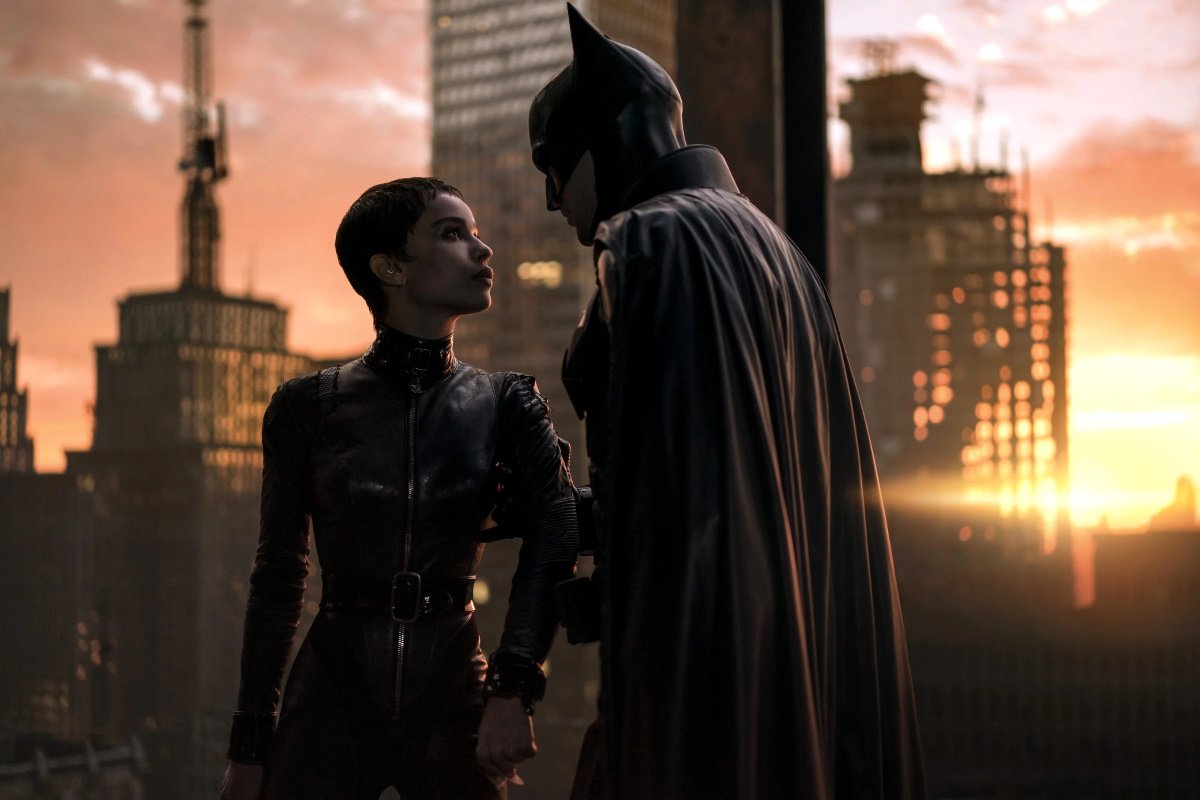 Robert Pattinson takes on the role of “The Batman” (2022, PG-13) in the big screen reboot from director/cowriter Matt Reeves. Reeves embraces the darkness (both literal and figurative) in his take, set in the second year of his vigilante campaign. It’s as much murder mystery as superhero movie, with The Batman tracking a serial killer leaves riddles with his corpses and battling an underworld crime lord. Imagine the superhero dropped into the movie “Seven.” Zoë Kravitz plays Selina Kyle, aka Catwoman, and Jeffrey Wright, Paul Dano, John Turturro, and Colin Farrell costar. (HBO Max)

“A Very British Scandal” (2022, TV-14) follows up the 2018 series “A Very English Scandal” with the story of Margaret Whigham, the Duchess of Argyll (Claire Foy), and her divorce from Ian Campbell, the Duke of Argyll (Paul Bettany), which in England was branded “the divorce of the century.” The series tackles the double standards in the public and the press when it comes to indiscretions and blame. It’s from writer/creator Sarah Phelps, author of an acclaimed series of Agatha Christie adaptations. (Prime Video)

Peter Dinklage takes the lead in “Cyrano” (2022, PG-13), a musical adaptation of the classic play by Edmond Rostund about a soldier who helps a young man woo the woman he loves. Also on DVD and at Redbox.

“Jackass Forever“ (2022, R) reunites the legendary troupe for one last blast of ill-advised stunts and absurd, often dangerous slapstick antics as they enter middle age. Also on DVD and at Redbox.

Available same day as select theaters nationwide is “Bloody Oranges“ (France, 2021, not rated, with subtitles), a dark comedy of everyday lives spinning wildly out of control.

“Along for the Ride“ (2022, TV-MA) is a teen romance about high school insomniacs (Emma Pasarow and Belmont Cameli) who create a fantasy teen life as their town sleeps. Andie MacDowell, Dermot Mulroney, and Kate Bosworth costar.

“Choose or Die“ (2022, TV-MA) is a cursed vintage video game that sends its players into deadly situations with no good way out. Iola Evans, Asa Butterfield, Eddie Marsan, and Robert Englund star.

The queer high school romantic comedy “Heartstopper: Season 1“ (TV-14) follows two friends (Kit Connor and Joe Locke) who find that there is something more to their relationship.

The second season of “Russian Doll“ (TV-MA) sends Nadia and Alan (Natasha Lyonne and Charlie Barnett) through another existential adventure.

A fake psychic (Elizabeth Reaser) inadvertently summons a real evil spirit that possesses her son in “Ouija: Origin of Evil“ (2016, PG-13) from “The Haunting of Hill House” director Mike Flanagan.

True crime: the limited series “Captive Audience: A Real American Horror Story“ (2022, not rated) begins with the story of Steven Staynor, who was kidnapped as a child and reunited with his parents seven years later, and follows the corrosive effects of the glare of media attention.

“The Flight Attendant: Season 2“ (TV-MA) finds the now-sober Cassie (Kaley Cuoco) moonlighting as a CIA asset, which gets her entangled once again in international intrigue. New episodes on Thursdays.

A collection of original documentaries debut for Earth Day. From Disneynature comes “Polar Bear“ (2022, PG), which follows a new mother preparing her cub for the world, National Geographic presents “Explorer: The Last Tepui“ (2022, TV-PG), which follows a team of elite climbers tackling a 1000-foot sheer cliff deep in the Amazon jungle, and “The Biggest Little Farm: The Return“ (2022, TV-PG), a 30-minute follow-up to the 2018 documentary.

In the Irish crime drama “Hidden Assets: Season 1“ (not rated), a routine raid on a drug dealer leads a detective (Angeline Ball) to a political conspiracy rooted in the diamond trade in Antwerp. Two episodes available, new episodes on Mondays.

“The World of Guru Dutt” presents eight features from the director hailed as “the Orson Welles of Indian cinema” for his striking visual style, including his powerful portrait of artistic struggle, including his celebrated drama “Pyaasa“ (India, 1957, with subtitles), plus the documentary “In Search of Guru Dutt“ (1989) and an introduction by filmmaker Mira Nair.

“Fabian: Going to the Dogs“ (Germany, 2021, not rated, with subtitles), Dominik Graf’s epic adaptation of the classic Erich Kästner, follows a working class man in Berlin during the rise of Hitler. Also new:

Rebel Wilson stars in “Les Norton“ (not rated), a limited series from Australia featuring Alexander Bertrand as a bloke from the outback who gets seduced by the criminal underworld of 1985 Sydney.