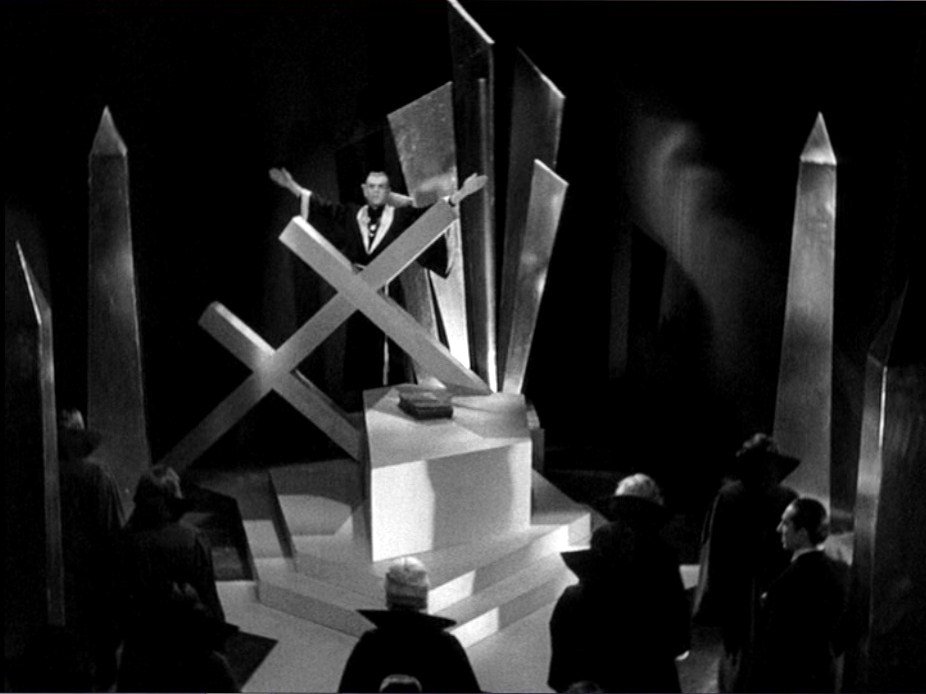 Bela Lugosi and Boris Karloff square off in their first and finest film together as Hjalmar Poelzig and Dr. Vitus Werdegast, decades-old nemeses who meet for a fateful showdown on the very World War I battlefield where devilish dark priest Poelzig sacrificed his own army and framed the good doctor Werdegast for the crime.

The title comes from Edgar Allan Poe but the story is something else entirely. Karloff plays the most evil character of his career, a mesmerizingly demonic architect inspired by the notorious real life Satanist Aleister Crowley. He stole Werdegast’s wife and daughter and built his shrine-like home, a stunning piece of Bauhaus-inspired glass and steel architecture, on the graves of his victims. His intensity and hypnotic understatement is a revelation, a genuine monster in human guise far more insidious and evil than the creatures of Universal’s more famous horror classics.

Lugosi delivers his finest performance in a rare heroic turn as a Van Helsing-like hero whose simmering hatred and rage finally boils over into madness and sadistic revenge. David Manners (costar of both Dracula and The Mummy) and Jacqueline Wells (who rechristened herself Julie Bishop a few years later) costar as the silly American honeymooners who become but two more pawns in their game of vengeance.

John Mescall, who shot the gorgeous Bride of Frankenstein, creates eerie unease and sinister imagery, from the Caligari-like black church of slanting beams and slashing shadows to the tomb of glass lined caskets displaying victims held in suspended animation. The unsettling soundtrack enhances the eerie atmosphere.

It’s a beautiful and devastating melding of gothic antiquity and modernity in the shadow of World War I. Though not as well remembered as the more famous monster movies of the 1930s, it was the biggest box-office hit of the year for Universal and the first of eight films featuring the two horror stars, and it remains one of the finest horror films to emerge from the golden age of American horror cinema.