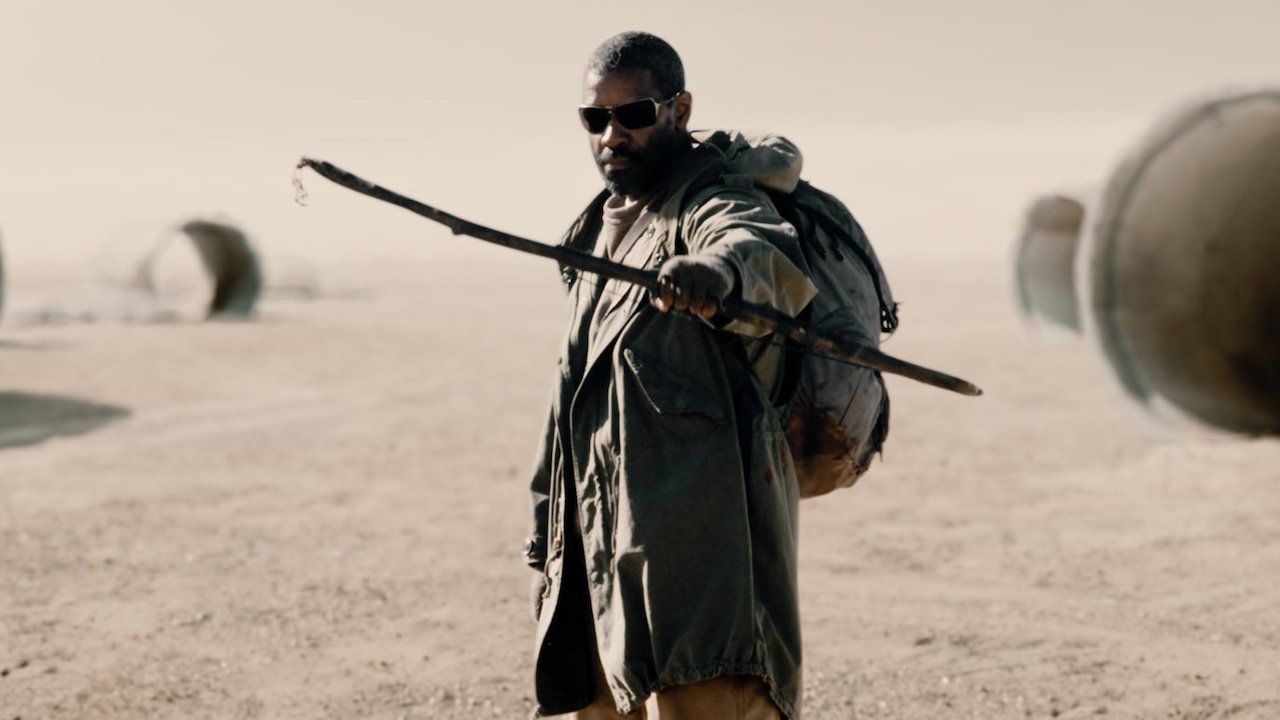 The Book of Eli (2010) is more interesting than the conceptual mix of post-apocalyptic science fiction, spaghetti western (lone stranger, corrupt town, searing sun and desert of ash), and spiritual odyssey might suggest.

Denzel Washington is the Walker, a soft-spoken traveler on a mission to safeguard the last known Bible, and he strides the wastelands like a survivalist samurai. He never provokes and never backs down. Then he walks into a dusty little frontier town run by Carnegie (Gary Oldman), a petty despot with grand ambition, and he wants the book to build his empire. “It’s not a book,” he explains to his number two man. “It’s a weapon! Aimed at the hearts and minds of the weak and desperate.”

Washington is well cast as the soft-spoken traveler and if Gary Oldman overacts the role of the despot with a dream (note that he’s reading a Mussolini biography in his introduction), he at least tries to inject a little color into the palette. Mila Kunis costars as Solara, a woman inspired to escape the control of Carnegie by the Walker. She’s essentially his first apostle.

The apocalyptic odyssey is set thirty years after “the flash” killed off most of the human race, blinded many of those who survived, and poisoned the Earth, essentially bringing on the end of the world as we know. Directors Albert and Allen Hughes (under the title The Hughes Brothers) lean into the allegorical elements, making it a badlands spaghetti western by way of a holy mission and a science fiction frontier thriller that embraces the possibility of miracles.

There aren’t a lot of surprises along the journey but The Hughes Brothers still deliver a solid, satisfying genre picture. And I appreciate the acknowledgement that power is not merely about the control of water and trading protection for obedience. In a culture where books are just as scarce a resource as food (for reasons ultimately spelled out in the dialogue; desperation and despair creates the ideal situation for hysteria and extremism), knowledge really is power.

The film can straddle both truths—religion can help and inspire people, and it can control and manipulate. It’s what gives this frontier thriller and grim action movie something beyond the spectacle. The spiritual miracle journey plays out in the secular world and pays off on both levels.

The DVD includes just under two minutes of deleted and alternate scenes (some obviously quite brief) and a brief prequel in graphic novel form (with minimalist animation of art panels). The Blu-ray has many more supplements, including the featurettes “Starting Over” (what life after the apocalypse really look like?) and “Eli’s Journey,” a short piece on the score and the Maximum Movie Mode, essentially a picture-in-picture video commentary track with interview clips, storyboards, behind the scenes footage and instant access to ten “Focal Points” featurettes (these can also be accessed directly through the menu). There’s not quite enough material to fill the running time, leaving long gaps at times, but it’s fairly well produced and informative enough to make it worthwhile.