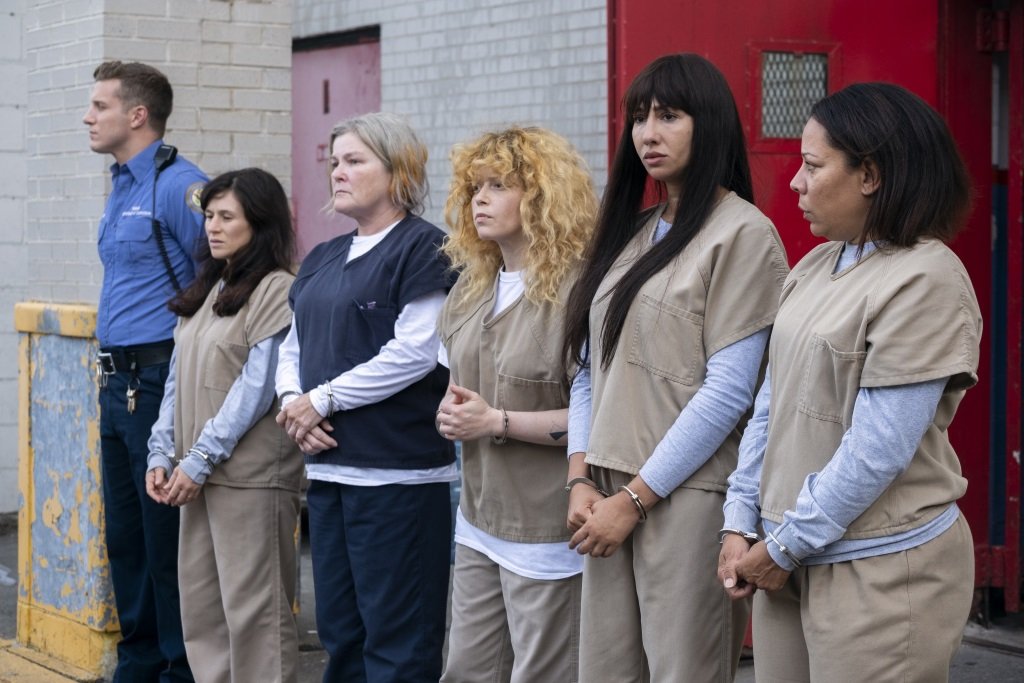 Netflix brings its signature original series to a close with the seventh and final season of Orange Is the New Black. Based on the memoir by Piper Kerman, renamed Piper Chapman and played by Taylor Schilling in the series, it expanded beyond the “privileged white girl in prison” set-up to explore the lives of the most diverse cast of characters on TV or streaming. Along with the human drama, the show engaged with issues of poverty, racial injustice, mental illness, and prison reform with humor, empathy, and moments of tragedy. Now Piper reaches the end of her 16-month sentence. 13 episodes now streaming on Netflix.

Kristen Bell is back as cynical, smart-talking private detective Veronica Mars in the Hulu revival of the mystery series, which reunites practically the entire cast for an even darker crime story in the corrupt California vacation town of Neptune. The fourth season, which unexpectedly debuted last week, takes the high school series into young adult territory but the chemistry between Veronica and her father (Enrico Colantoni) is as playful and clever as ever. Patton Oswalt and J.K. Simmons costar. 8 episodes on Hulu.

You could call the new Amazon Prime Original series The Boys an anti-superhero show. Karl Urban and Jack Quaid star as civilians who fight back against the abuses and crimes of costumed heroes, aka “supes,” who are spoiled, corrupt media stars more concerned with their brand than with justice. Based on the comic book by Garth Ennis and developed for Amazon by Eric Kripke (creator of Supernatural) with Evan Goldberg and Seth Rogen, it’s cynical and satirical (the supes are parodies of DC’s Justice League) and full of dark humor and splattery violence. 8 episodes on Amazon Prime Video.

Classic pick: a disillusioned businessman gets a second chance at life with a young body (Rock Hudson) in Seconds (1966, R), a nightmarish psychodrama from director John Frankenheimer. Streaming on Amazon Prime Video and free on Kanopy.

The violent reboot of Hellboy (2019, R) with David Harbour (Stranger Things) was a disappointment next to the original Guillermo Del Toro movies but the curious can stream it on Amazon Prime Video the same day it arrives on Cable on Demand, VOD, DVD, and at Redbox. Also new:

Katee Sachkoff is an astronaut investigating an alien ship floating above the Earth in Another Life: Season 1, a new science fiction/horror series. 10 episodes.

Brie Larson stars as a counselor for kids that the foster system failed in the indie drama Short Term 12 (2013, R).

Lily James is a Dutch Jew in the World War II occupation drama The Exception (2016, R) with Christopher Plummer.

True stories: The Great Hack (2019, not rated) looks back at how Cambridge Analytica illegally harvested private data to help the Trump and “leave E.U.” campaigns in national elections.

Foreign affairs: a volleyball team gets stranded in the French countryside in the gory horror comedy Girls With Balls (France, 2018, not rated, dubbed and subtitled versions). Also new:

Streaming TV: The Worst Witch: Season 3 continues the family comedy about a young student in a magic academy. Also new:

Bollywood costume epic Khuda Gawah (aka God is My Witness, India, 1992, not rated, with subtitles) is a grand and gloriously-mounted romantic drama with star-crossed lover, warring tribes, musical numbers, and a revenge quest that spans two generations and three hours. It was also first film that Seattle’s Scarecrow Video released on their (long defunct) home video label.

The sophisticated animated feature Millennium Actress (Japan, 2001, PG) creatively weaves history and memory into a meditation on way the movies become a part of our lives. Amazon presents the English language version.

Also new: the remake of Fame (2009, PG) with Kelsey Grammer and Megan Mullally;

Time Freak (2018, PG-13) stars Asa Butterfield as a teenager who travels back in time to stop his breakup with his girlfriend (Sophie Turner) (Prime Video and Hulu).

The documentary Apollo 11 (2019, G) uses rare archival footage to revisit the NASA mission that put the first human on the moon. Also new:

Jennifer Lawrence is a Russian ballerina forced to become a spy and seduce a CIA agent (Joel Edgerton) in the Cold War thriller Red Sparrow (2018, R).

The two-part documentary Who Killed Garrett Phillips? (2019, TV-MA) looks back at the 2011 murder of a 12-year-old boy and the subsequent trial of a suspect on dubious evidence.

David Tennant stars in United (2011, not rated), a TV movie about England’s Manchester United after eight members of the club died in the 1958 Munich air disaster.

The third and final season of the BAFTA-winning comedy Mum with Lesley Manvile and Peter Mullan is now streaming.

The Criterion Channel presents eight features by director Richard Lester, including the Beatles classic A Hard Day’s Night (1964) and Robin and Marian (1976) with Sean Connery and Audrey Hepburn, and four films directed by Ida Lupino, including her film noir classic The Hitch-Hiker (1953) and the sensitive The Bigamist (1953).

Also featured on Criterion this week are Steven Soderbergh’s two-part epic Che (2008, not rated) with a collection of bonus supplements and a double feature of bare-knuckle film noirs from Anthony Mann: T-Men (1947) and Raw Deal (1948).

The entire Robotech saga, from the original 85 episodes of the animated science fiction through the sequel shows and feature film, is streaming free (with commercials) on The Roku Channel, Vudu and other ad-supported VOD channels