Set in the Dakota Territory of 1879, The Burrowers (2008) is a monster movie grounded in a frontier sensibility. Set in the Dakota Territory of 1879, where survival is already a challenge, writer / director JT Petty brings a starkly unglamorized sensibility to life and mortality on the Dakota prairie: it opens with a boy come a courting to a farmgirl only to discover a massacre and what appears to be the abduction of the girl.

Clancy Brown and William Mapother, who have faces that look like they’ve survived tough times, are perfect as the leaders in a hunting party after a kidnapped girl; they are confident but unpretentious and very respectful of the country. But they think they’re tracking an Indian raiding party. What they find are fetid holes in the prairie ground filled with bone and blood and sinew, as if a body has been digested by the Earth.

Which is close to the truth.

Petty plays the unforgiving tensions between the settlers and the native tribes with palpable animosity, the distrust so great that their fragile truce snaps before they even take on the burrowers, the underground creatures that have been hunting on the prairie. He keeps the threat visually vague and the insect-like burrowers shadowy and smudged, creating his horror out of mystery and suggestion, but it’s nothing supernatural or alien. It’s a real western/horror/monster movie with a devoted frontier sensibility and intelligent nods to The Searchers.

On VOD through iTunes 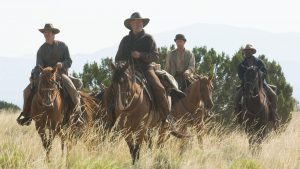