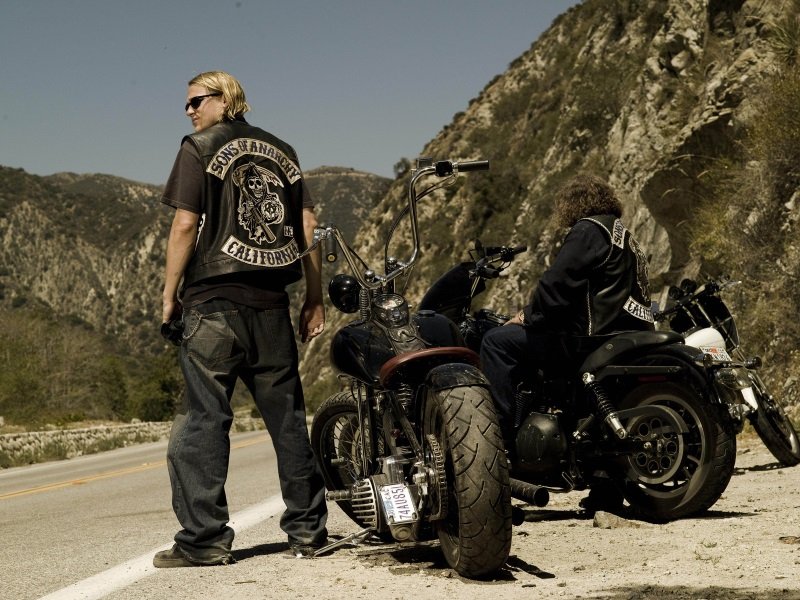 is now available to Netflix, Amazon Prime, and Hulu Plus subscribers alike.

Sons of Anarchy, the FX drama of family ties, brotherhood, loyalty, betrayal, and honor in an outlaw motorcycle gang that practically runs the (fictional) Central California desert town of Charming. grew from cult show to surprise hit over the course of its seven season run.

The crime drama had taken on almost Shakespearean dimensions, from a “Hamlet”-like conflict between club heir apparent Jax Teller (Charlie Hunnam) and his step-father Clay (Ron Perlman), while offering a kind of leather jacket soap opera and an idealized portrait of underworld brotherhood under fire. Jax was the well-meaning warrior prince determined to deliver Camelot to his brothers but constantly beset by blowback from his alliance and criminal activities. By the time the final season roared out in the fall of 2014, the club had left enough victims in the wake of their criminal activities and territorial battles to fill a small graveyard, including Clay and his own wife, murdered by his mother Gemma (Katey Sagal), the ferocious den mother of this wolf pack. As likable as this scruffy but loyal brotherhood could be, it was hard to overlook the violence of their business, the bodies dropped in misguided acts of vengeance (either by impulse or spurred by the lies of betrayals or cover-ups), and the innocents killed in the crossfire.

Those reservations aside, I remained a fan of the show to the end if only for creator Kurt Sutter’s commitment to the whole twisted idea of brotherhood and the fantasy that they are the protectors of their town. The individual members of the club (at least those who survived to season seven) have all become distinctive, integral characters with their own issues and Gemma a broken, doomed figure spinning stories to delay the inevitable revelation and retribution. Jax’s young son (who knows what Gemma did) takes on the look of a zombie, haunted by the knowledge that his grandmother killed his mother and acting out with acts of violence at school. The hypocrisy he sees in the adult world is poisoning his soul, a truly innocent victim of the violent life of his father.

Annabeth Gish joins the show for the final season as the new sheriff of Charming, a veteran who understands that a certain amount of accommodation to the outlaw elements is necessary to keep things from blowing up on the streets, and Jimmy Smits is back as Nero, club ally and conscience to Jax, the compassionate and honorable father figure he lacked in Clay, and there are return visits from some familiar faces, notably Hal Holbrook as Gemma’s infirm father and Walton Goggins as Venus, a tough yet tender transsexual dominatrix with whom club hothead Tig (Kim Coates) falls in love in one of the most touching stories weaving through the series.

Guest stars include Marilyn Manson as a white supremacist taking care of business for the club in prison, Courtney Love as a pre-school teacher who tries to help Jax’s troubled son, Glee‘s Lea Michelle as a truck stop waitress who befriends Gemma, and small roles from Robert Patrick and Michael Chiklis (star of Kurt Sutter’s previous series, The Shield).

As far as the idea of justice is concerned, the show follows its own tunnel-vision code. These guys sell guns to California gangs and run a brothel and a pornography business (which, oddly enough, are managed by women and accommodating to the employees—you gotta love a socially progressive gangster) and routinely murder obstructions and threats, but Jax draws the line at drugs and the IRA pipeline that Clay established. In their world, that’s a moral stand, and while the show flirts with the collateral damage and unintended consequences of their business, it tends to overlook the bigger picture and ask us to look beyond the criminal code. The outlaw romance of their world is a façade but Sutter shapes that fantasy into a brutal, blood-soaked melodrama of retribution and redemption and delivers an operatic finish to the show. A few deserving characters even get happy endings.

The show ran on commercial cable, which meant that for all the sex and violence (and there is plenty of both), the show remained on this side of explicit in its imagery and language. For disc release, however, more explicit violence, sexuality, and foul language censored for cablecast is intact, and I assume that’s the case for the streaming version of the series too, so in case the above description wasn’t enough of a hint, treat this as an R-rated production.

Also available for purchase on disc and digital formats.

Pingback: Stream On Demand|What to Watch the week of Friday, May 1
Comments are closed.