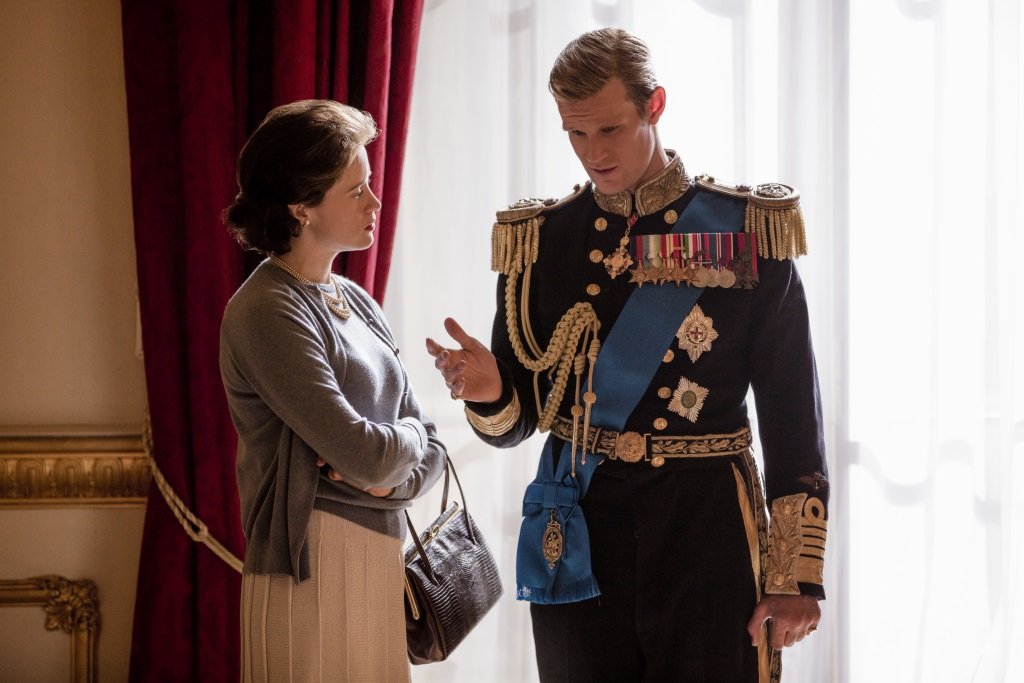 Claire Foy returns as Queen Elizabeth in the second season of The Crown, the impressive historical series from Oscar-nominated writer Peter Morgan. It’s one of the most acclaimed shows on Netflix and this season takes royal couple Elizabeth and Philip (Matt Smith) through the socially turbulent sixties as the monarchy becomes less relevant to British life.

“[T]he ten episodes arriving Friday on Netflix broaden the canvas to explore the fragility of various relationships, both personal and political,” observes Jen Chaney for Vulture. “Although it’s still very much a serious drama, the show, set this season between 1956 and 1963, has a warmer pulse. Reflecting the march toward more modern times, it’s also sexier, especially every time Princess Margaret (Vanessa Kirby) shows up onscreen to suck on a cigarette and smolder.”

Marvel’s Guardians of the Galaxy Vol. 2 (2017, PG-13) sends Marvel’s intergalactic team of misfit heroes on a colorful odyssey to the center of the universe with video game battles and hyperspace jumps to learn the meaning of family. With Chris Pratt, Zoe Saldana, guest star Kurt Russell, Baby Groot, and a jukebox collection of 1970s pop tunes. It’s now on Netflix.

TV is overwhelmed with superhero shows but Legion, drawn from the Marvel Comics Universe and developed for FX by Fargo showrunner Noah Hawley, offer a unique take on the genre, with a schizophrenic mutant hero (Dan Stevens), a mind-warping villain, and a maniacal performance from Aubrey Plaza. The first season is now on Hulu.

The minions are back in Despicable Me 3 (2017, PG), where reformed villain Gru (voice of Steve Carell) meets his long-lost twin brother Dru.

Steven Spielberg brings the beloved boy adventurer of Herge’s graphic novels to the big screen in the animated The Adventures of Tintin (2011, PG).

Toby Maguire and Elizabeth Banks star in the black comedy The Details (2011, R) as a suburban Seattle couple who make some very bad choices and Q’orianka Kilcher is Princess Kaiulani (2009, PG) in the dignified but sanitized story of the last princess of Hawaii.

The concert special Barbra: The Music … The Mem’ries … The Magic! (2017, not rated) presents Streisand live in Miami.

Somewhat cheekier is the documentary Jingle Bell Rocks! (2014, not rated), which tracks down the most unusual, eccentric, and unbelievable Christmas songs ever released.

Streaming TV: Class: Season 1 from BBC is a Doctor Who spin-off about time-travelling students (8 episodes) and The Royals: Season 3 continues the trashy soap opera set in a fictional British monarchy.

The contemplative indie drama Columbus (2017, not rated) stars John Cho as a man confronting the mortality of his father while touring the modernist architecture of Columbus, Indiana.

Steve McQueen stars in the original The Thomas Crown Affair (1968, R) as a millionaire criminal mastermind who plots elaborate heists for the thrill and meets a worthy opponent in the elegant and relentless insurance investigator Faye Dunaway.

Mark Wahlberg and Kurt Russell star in the action thriller Deepwater Horizon (2016, PG-13), about the workers trying to survive the oil rig disaster.

Also new: comedy Wilson (2017, R) with Woody Harrelson as a neurotic curmudgeon who discovers he has a grown daughter and thriller Unforgettable (2017, R) with Katherine Heigl going psycho on Rosario Dawson.

True stories: The Newspaperman: The Life and Times of Ben Bradlee (2017, not rated) profiles the esteemed editor of The Washington Post and 32 Pills: My Sister’s Suicide takes a personal approach to a story of mental illness and suicide.

A number of HBO International limited series, including mystery thriller Wasteland from the Czech Republic and horror-fantasy Halfworlds from Indonesia, are now available to subscribers on HBO Now, HBO Go, and HBO On Demand.

Kristen Stewart is an American Personal Shopper (France, 2016, R, English and French with subtitles) to a French celebrity in Paris in the enigmatic ghost story/murder mystery from filmmaker Olivier Assayas.

And in the holiday spirit (sort of) is the comedy Office Christmas Party (2016, R) with Jason Bateman and Jennifer Aniston.

Director of the week is Bimal Roy, one of the successful and celebrated filmmakers in India through the 1950s and 1960s, and FilmStruck presents 9 films, including his epic musical melodrama Devdas (India, 1955).

14 classic giant monster movies from Japan stomp into The Criterion Channel this week, from the original Japanese version of Godzilla (Japan, 1954), as well the American version featuring scenes with Raymond Burr, to the lizard-versus-robot battle Terror of Mechagodzilla (Japan, 1975).

The Indian Doctor (2010-2013) stars Sanjeev Bhaskar as the title character, newly arrived from New Delhi to small Welsh mining town in the 1960s. All three seasons of the award-winning BBC drama available.

The quirky The Brokenwood Mysteries from New Zealand returns for a fourth series, with new episodes arriving each Monday.