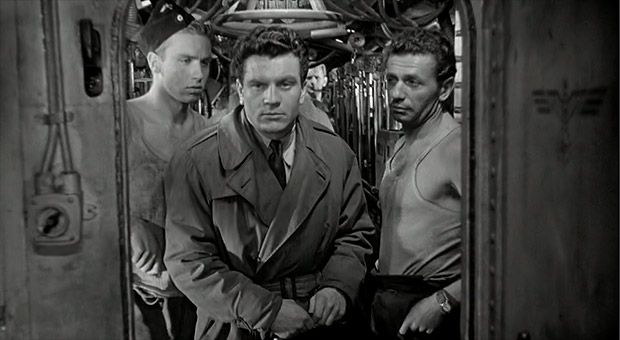 The Damned (aka Les maudits) (France, 1947) is a superb title for this noir-tinged 1947 French war thriller from René Clément. In the final days of World War II, as the Third Reich falls under the Allied advance, the Nazis send a special team on a secret mission to South America by submarine to prepare the way for Reich’s arrival. A bunch of venal characters locked together in a claustrophobic space for a long voyage: what could go wrong?

It’s narrated by a French doctor they kidnap to treat an injured passenger and ostensibly it’s about his efforts to escape the coalition of Nazi leaders, Axis partners, and European collaborators, but there’s a lot going on in this confined space (with periodic port stops for supplies and information). In fact, there’s a little too much for Clément to keep track of in the opening scenes, introducing a huge cast with specific ranks and specialties very quickly and then setting them against each other, leaving us to keep track of the complicated relationships.

In a way, this is a dark twist on the classic platoon film; in this version, the members are killed off, one by one, by their own side. The German General clashes with the Nazi Gestapo chief, both convinced they are the face of true Fascism in practice, and toys with an Italian industrialist aboard only because his wife is the General’s mistress. This is a team of opportunists, betrayers, bullies, and psychopaths and Dr. Guilbert (Henri Vidal) spends his imprisonment hatching plans to keep himself alive and plot his escape. Instead, mistrust and mercenary self-interest ends up setting the sorry Nazi dream team against itself as they slowly get news of Hitler’s death, the fall of Berlin, and the surrender of Germany. That’s no reason to abort this mission, according to some on board, and they enforce their command on pain of death.

It makes for one of the strangest and darkest submarine movies ever made. The camera, operated by the great Henri Alekan (Cocteau’s Beauty and the Beast and Wenders’ Wings of Desire), is remarkably mobile through the cramped submarine set and it explores every nook and cranny of the limited space, the better to remind us of just how close these quarters are and to measure the pressure building in this toxic atmosphere. Clément offers a portrait of the so-called Master Race as a nest of parasites who prey on themselves when locked together in a claustrophobic cage as their power collapses in the world outside. It was made just a couple of years after end of World War II and the lingering wounds were still surely tender. Those years also probably helped Clément shape a film with such a fatalistic look at the last days of the Third Reich as well as a complex portrait of leaders and collaborators facing the ultimate failure of their power and their future.

Black and white, in French with English subtitles, not rated

, iTunes, GooglePlay, Fandango, Vudu and/or other services. Availability may vary by service.
The Damned [Blu-ray]

On Blu-ray and DVD from Cohen Film. It’s mastered from a decent but unspectacular print, which is a little soft in places and suffers from scuffing and minor surface damage, and the color tone shifts from black and white to blue-gray tint and back again. Given the compromises of the source material, it looks just fine and the discs include commentary by film scholars Judith Mayne and John E. Davidson and the 54-minute documentary “René Clément or The Cinema of Sketches,” a very good portrait of the director with a focus on The Damned.