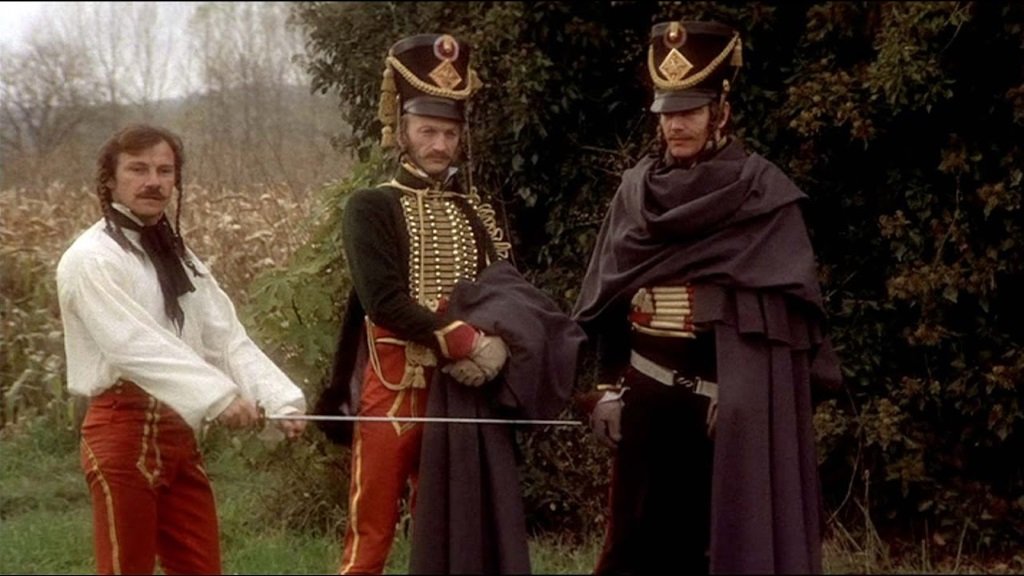 “The duelist demands satisfaction. Honor for him is an appetite.”

The Duellists (1977), the feature debut of Ridley Scott, begins in 1800, “the year Napoleon became ruler of France,” with an early morning duel in a dewy green meadow where French military officer Gabriel Feraud (Harvey Keitel) runs his opponent through and then busies himself with cleaning the blood from his blade and tidying his uniform. In the beauty of this Eden surrounded by emerald forests and seeped in primordial mist, this man has brought senseless violence under guise of a battle for “honor.” When fellow officer Armond D’Hubert (Keith Carradine) is sent by their commanding officer to track him down for the offense, Feraud once again issues a challenge and attacks with a fury that is clearly driven by something more than the vaguely defined honor of Napoleon’s good name.

For Feraud it is the beginning of an obsessive, decades-long quest to best this man who has not just survived these bouts but injured him in front of witnesses. D’Hubert is clearly the more rational and centered of the two men yet is trapped by his own devotion to the chivalric traditions of conduct, which demands no challenge goes unmet, no matter how groundless. “It is the only honorable thing to do,” he offers by way of explanation, but that’s before Feraud’s obsessive campaign stretches into years and the roots of any perceived injury are long forgotten or simply conflated into slanderous lies designed to justify the irrational behavior.

Carradine gives D’Hubert a warmth and a humanity that slowly finds a place outside of the military, in sharp contrast to Keitel’s Feraud. Under an impeccably groomed and majestically shaped mustache and braided locks swinging with every lunge and parry, Feraud is all curt manner and simmering intensity, which is as much as we ever know of this man. Scott surrounds them with a fine supporting cast of veteran British actors, including brief but memorable appearances by Edward Fox, Robert Stephens, Tom Conti and Albert Finney. Cristina Raines, who plays the beautiful young Adele, the woman with whom D’Hubert falls in love, had quite memorably appeared as Carradine’s lover just the year before in Nashville.

Shot in location in France, England, and the Scottish highlands, Scott suggests battle scenes in isolated details and street scenes in mere slivers of the city where a few extras stand in for the bustling crowds. Interiors are bathed in the golden light of candlelight and nostalgia, like a period painting in motion, while exteriors are wrapped in fog and mist. It’s a production triumph in service of a quietly compelling drama that turns on inexplicable obsessive drives long dislocated from the ostensible affront that sparked the conflict.

The Duellists earned glowing reviews and the award for “Best First Work” at the 1977 Cannes Film Festival and it provided a showcase for his eye for images and his talent for painting scenes with a camera. On the strength of this film, he was hired to direct a modest horror film in space that he turned into a smash hit: Alien. The rest is film history.

, iTunes, GooglePlay and/or other services. Availability may vary by service.
The Duellists [Blu-ray]

On DVD and Blu-ray with commentary by Ridley Scott and a second commentary track by composer Howard Blake with an isolated score. The Shout! Factory Blu-ray features a remastered transfer and the interview featurettes “Duelling Directors: Ridley Scott and Kevin Reynolds” and “The Story of The Duellists” with Keith Carradine.