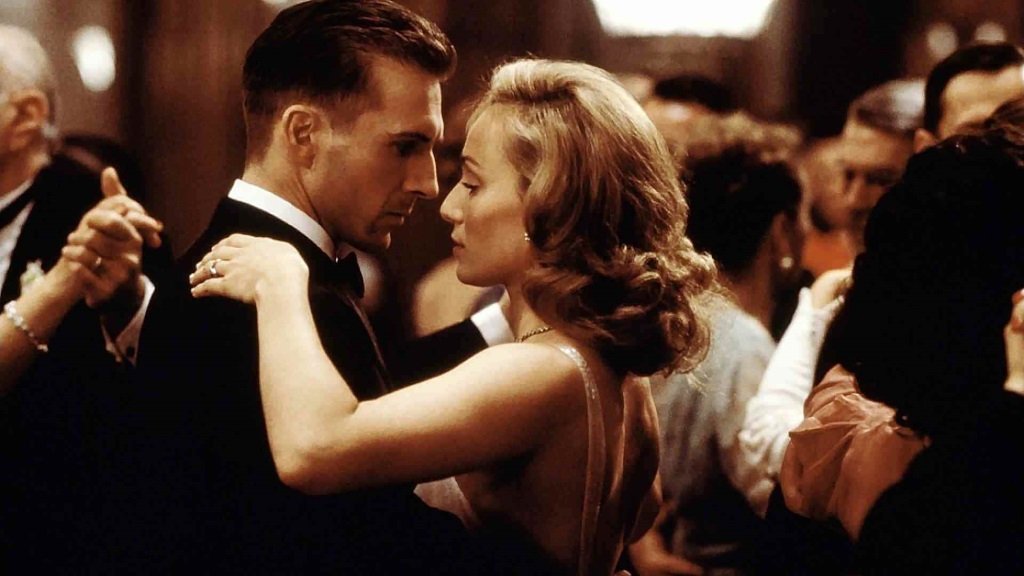 The African desert, WWII, and romance… no doubt about it, The English Patient (1996) is a Casablanca for the 90s, directed with sweep, elegance, and grand passions by Anthony Minghella from his screenplay adaptation of Michael Ondaatje’s novel.

Ralph Fiennes, scarred by fire and buried under bandages like an Egyptian mummy, is the mysterious patient who confesses a terrible tale of passion, tragedy, and treason to the angelic nurse Juliette Binoche. Cue flashback: a swoony obsession with the elegant but married Kristin Scott Thomas, a doomed affair, a dying promise, collaboration with the enemy, all in the name of love.

Oh sure, it’s not quite so patriotic as Casablanca, where the moral trumps the emotional, and Fiennes is far more tormented and compromised than Rick Blaine, but dreamy Binoche and the classy Scott Thomas combined add up to an Ingrid Bergman for our time. Willem Dafoe carves out a memorable piece of the picture as Caravaggio, a Canadian thief and British spy endangered by Fiennes’ change of allegiance, and Naveen Andrews is almost as beautiful as Binoche in Minghella’s lens as the Sikh bomb diffuser who romances Binoche. Colin Firth and Jürgen Prochnow co-star.

Winner of nine Academy Awards, including Best Picture, Director, Supporting Actress (Juliette Binoche), and Cinematography (John Seale), this old fashioned/new-age romance is set off like a jewel with the most elegant people and gorgeous costumes you ever saw survive a trek through the desert.

, iTunes, GooglePlay and/or other services. Availability may vary by service.
The English Patient [Blu-ray]

The Blu-ray and DVD special editions feature two commentary tracks (a solo track by director Anthony Minghella and a track by Minghella with producer Saul Zaentz and novelist Michael Ondaatje), the well-made 50-minute made-for-Canadian TV documentary “The Making of The English Patient” and the 20-minute deleted scenes featurette “Master Class with Anthony Minghella” (originally produced for the laserdisc edition). Also features a wealth of information in the multi-part interview featurettes “About Michael Ondaatje” and “Filmmaker Conversations” with Anthony Minghella, Saul Zaentz, Michael Ondaatje, and editor Walter Murch, the short featurettes “From Novel to Screenplay: Interviews with Cast and Crew” and “A Historical Look at the Real Count Almasy” and additional mini-featurettes.