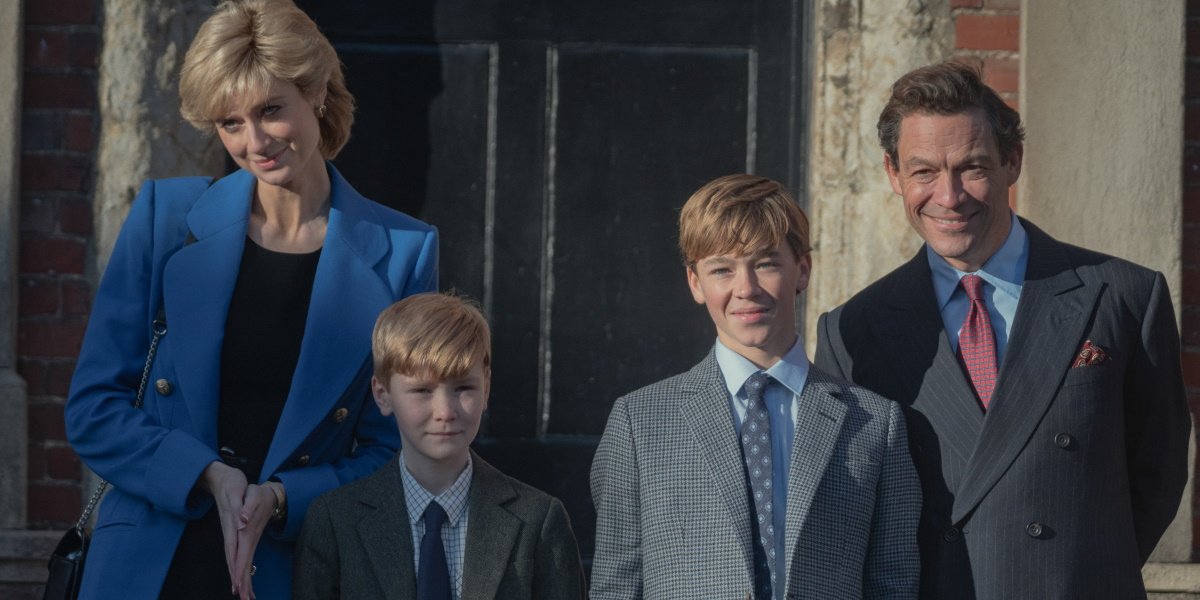 Controversy accompanies the fifth season of “The Crown“ (TV-MA) as Peter Morgan’s epic series dramatizing the life of Queen Elizabeth II moves into the 1990s, with the troubled marriage and divorce of Charles and Diana the least of the scandals plaguing the Royal Family as the Queen resists modernizing the monarchy. A new cast once again takes over the roles, with Imelda Staunton as Queen Elizabeth, Jonathan Pryce as Prince Philip, Dominic West as Prince Charles, and Elizabeth Debicki as Princess Diana. British politicians and members of the royal family have been bitterly critical of the portraits this season but most critics find Morgan’s perspective compelling and insightful. (Netflix)

Emily Blunt plays an aristocratic Englishwoman who treks through the frontier of 1890s America on a mission of vengeance with a Pawnee scout (Chaske Spencer) in “The English“ (2022, TV-14). The gritty limited series sends the unlikely duo through the violent unsettled west to a murder mystery in a frontier town, both embracing and upending classic western conventions. Ciaran Hinds, Toby Jones, and Steven Rea costar in the British-American coproduction. New episodes on Fridays. (Prime Video)

A seemingly happy housewife (Florence Pugh) suspects there is a dark secret behind their exclusive desert community in “Don’t Worry Darling“ (2022, R), a psychological thriller with echoes of David Lynch and “The Stepford Wives” and an uncomfortably contemporary relevance under its 1950s modernist setting. Olivia Wilde directs and costars with Harry Styles and Chris Pine. (HBO Max)

“Mrs. Harris Goes to Paris“ (2022, PG) stars Lesley Manville as a naïve but plucky cleaning lady in 1950s London who celebrates a sudden windfall with a dream trip to Paris to buy a Dior gown. Isabelle Huppert and Jason Isaacs costar in the bubbly, family-friendly comedy. (Peacock)

Jennifer Lawrence produces and stars in “Causeway“ (2022, R) as a military veteran recovering from a traumatic brain injury who befriends a local mechanic (Brian Tyree Henry), another wounded soul, while adjusting to civilian life. (Apple TV+)

The lighthearted mystery comedy “See How They Run“ (2022, PG-13) stars Sam Rockwell and Saiorse Ronan as British cops investigating a murder backstage at a London West End theatre in 1953. Also on HBO Max.

“Orgasm Inc: The Story of OneTaste“ (2022, TV-MA) traces the rise of the sexual wellness company OneTaste and its controversial guru-like founder.

Elvis Mitchell traces the history and evolution of Black cinema from its origins to its explosion in the 1970s in “Is That Black Enough for You?!?“ (2022, R). More true stories:

Interactive: “Triviaverse“ (not rated) lets viewers challenge a friend or a stranger in a rapid-fire quiz game.

The romantic comedy “Funny Thing About Love“ (2021, not rated) is your first holiday movie of the season with a Thanksgiving setting.

True stories: “Dreaming Walls“ (2022) looks at the legacy of the Chelsea Hotel, home to scores of musicians, writers and artists through the decades.

Streaming TV: episodes of the legal drama “All Rise: Season 3“ (TV-14) debut on Wednesdays on Hulu and HBO Max.

“Say Hey, Willie Mays!“ (2022, TV-14) surveys the life of the baseball legend and his superstardom during a transformative era of the Black American experience.

True stories: “The Montaners: Season 1“ (not rated) is a reality show featuring the family of Latin music superstar Ricardo Montaner and “Save Our Squad with David Beckham: Season 1“ (TV-14) follows the soccer legend as he helps a troubled youth league team in East London.

Paul Thomas Anderson draws from his own experiences (and those of others) growing up in San Fernando in the Oscar-nominated “Licorice Pizza“ (2021, R).

Based on a true story, “The Silent Twins“ (2022, R) stars Letitia Wright and Tamara Lawrance as sisters who create their own, private fantasy world to escape the reality of their lives.

When the humans are away, the household animals play in the animated comedy “The Secret Life of Pets“ (2016, PG).

The limited series “Mood“ (not rated) comes from actor, writer, and singer-songwriter Nicôle Lecky, based on her one-woman play. Two episodes available, new episodes on Sundays.

A couple competes for custody of their favorite bar after their break-up in the comedy “Bar Fight!“ (2002, not rated) starring Melissa Fumero and Rachel Bloom. Streams same day as theaters.

“The Curse: Season 1“ (not rated) fictionalizes the true story of the Brinks Matt robbery of 1983 as a crime comedy about small-time crooks who stumble into a one of the biggest gold heists in the world.

The grindhouse horror comedy “All Jacked Up and Full of Worms“ (2022, TV-MA) was a favorite on the horror and fantasy film festival circuit. Also on DVD.

A retired judge teams up with a police detective to solve mysteries in Bordeaux in “Mongeville: Season 1“ (France, TV-14, with subtitles), one of the most popular mystery shows in France.

The concert documentary “The Flaming Lips Space Bubble Film“ (2022, not rated) goes behind the scenes of spectacle devised by psych-rock legends for their COVID-19 shows.

Hoskins also has a supporting role in Terry Gilliam’s visionary “Brazil“ (1985), which is presented with filmmaker commentary, interviews, and documentaries from the special edition disc release.

The “Free Jazz” collection presents nine feature documentaries and three shorts on the musical movement, including “Sun Ra: A Joyful Noise“ (1980) and Ron Mann’s “Imagine the Sound“ (1981), a survey of the genre.

“A Pigeon Sat on a Branch Reflecting on Existence“ (Sweden, 2014), the third film in Swedish filmmaker Roy Andersson’s trilogy “about being a human being,” is another deadpan comedy of bleak humor and absurdist situations. (MUBI)