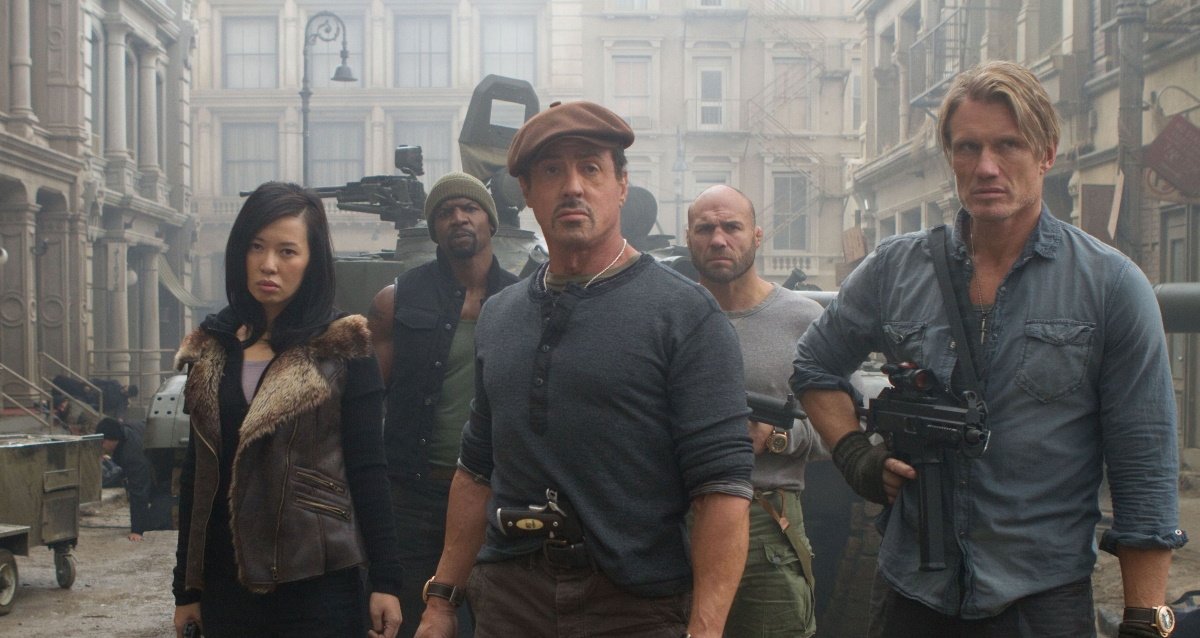 Sylvester Stallone gambled that there was an audience for old action heroes doing their thing on the big screen and brought a handful of them together for The Expendables in 2010. That was also pretty much the plot of the film — a crew of aging mercenaries go on a mission. For insurance, Stallone brought along Jason Statham as chief sidekick and current box office attraction, but the drawing power was all in the cast of old dogs doing their thing again after all these years: Stallone, Dolph Lundgren, Jet Li, Eric Roberts, Mickey Rourke, with assistance by Terry Crews and current B-movie regular Randy Couture and Steve Austin and cameos by Bruce Willis and Arnold Schwarzenegger.

For the obligatory sequel The Expendables 2 (2012), Stallone hands off direction to Simon West and ups the ante with more old faces on a mission that has something to do with plutonium and black market arms and peasants forced into slave labor. Rourke is MIA this time, but Chuck Norris makes a special guest appearance and Jean-Claude Van Damme gets to go the bad-ass as a real nasty bad guy named Vilain (get it? It’s Villain without the extra l!) while young up-and-comer Chris Hemsworth (aka Thor) barely registers in the mix.

Not that much of anything registers beyond the schtick of old guys playing around with their legacies, especially with Bruce Willis and Arnold Schwarzenegger getting expanded roles this time around, swapping tag lines between rounds, and Norris swaggering into the action like a Texas Ranger on a field trip to Asia. It’s a perfectly perfunctory plot on which to hang action and macho camaraderie, and there’s plenty of both slathered through the mission. Think of it as a B-movie triple feature edited into a single movie, all firepower and mayhem with nostalgia and tough-guy quips stirred through.

, iTunes, GooglePlay, Fandango, Vudu and/or other services. Availability may vary by service.
The Expendables 2 [Blu-ray]

Blu-ray and DVD, with commentary by director Simon West and a handful of featurettes. The 21-minute “Gods of War: Assembling Earth’s Mightiest Anti-Heroes” surveys the cast of this installment, with comments by Stallone on how corral a bunch like this, “Big Guns, Bigger Heroes: The 1980’s and the Rise of the Action Film” (25 minutes) looks at the respective careers of Stallone, Schwarzenegger, Willis and Van Damme, “Guns for Hire: The Real Expendables” (24 minutes) casts a lens to real-life mercenaries, and “On the Assault: The Real-Life Weaponry of The Expendables” profiles the firepower on screen. Also includes deleted scenes and a gag reel.