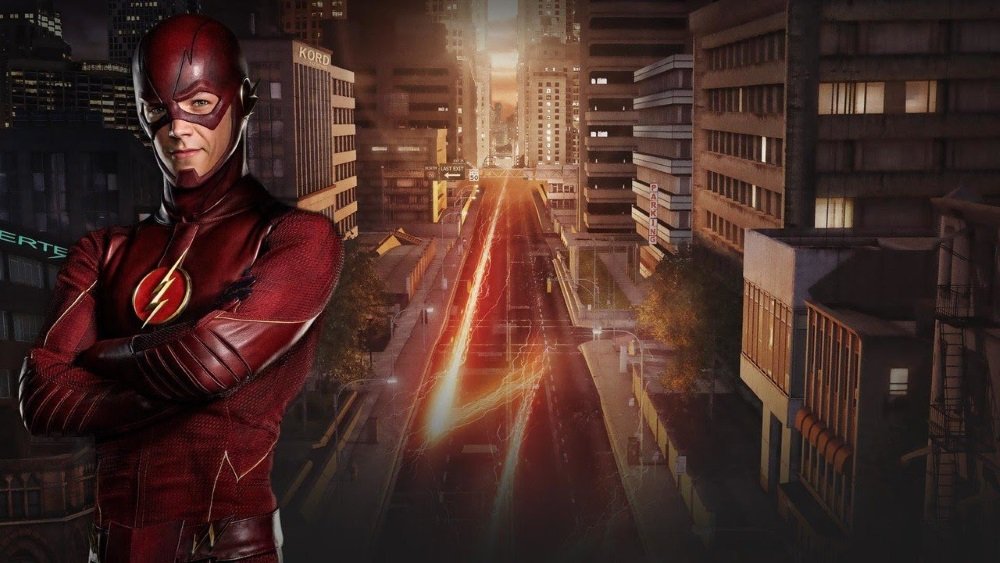 The Flash is the superhero TV show that a lot of people have been waiting for, a series that remembers that there are other modes of comic book TV beyond the grim Frank Miller / adult graphic novel style. It’s fun and self-aware with slipping into self-parody, bright and colorful, and downright playful, while still embracing the melodrama, the big battles, and the identity conflicts of the freelance superhero constantly forced to choose between his civilian life and his responsibilities as a super-powered hero.

Grant Gustin stars as police forensics scientist Barry Allen, a happy, well-adjusted young man who is struck by a lightning bolt during a disastrous explosion at the experimental Central City particle accelerator, giving him supersonic speed. Accelerator creator Dr. Harrison Wells (Tom Cavanaugh) and his team (Danielle Panabaker and Carlos Valdes) help him understand his powers and use them to fight crime. The accident also gave citizens of Central City powers. Some become heroes but most of them turn to crime as supervillains.

Gustin brings a bright, energetic, idealistic charge to Barry, who has overcome childhood trauma (he watched his mother killed by forces beyond his comprehension and his father go to prison for the crime) with the help of a loving foster father, Detective Joe West (Jesse L. Marin of Law and Order). Fathers and father figures are big in this show, as is commitment and loyalty, and those themes are played without cynicism. And of course there’s romantic complications: Barry is in love with Joe’s daughter Iris (Candice Patton), who sees Barry as a brother.

This series, developed by Arrow creator Greg Berlanti and comic book writer Geoff Johns, plays out with an exuberant tone, celebrating the rush of Barry’s powers and the charge of being a hero. The sense of fun also extends to the villains, especially the wisecracking Captain Cold (Wentworth Miller), a cunning nemesis who wisecracks and enjoys toying with Flash, and Grodd, a telepathic gorilla. That’s right, there’s a giant genius ape scurrying through the sewers of Central City, something right out of a comic book, as well as time-travel conundrums and a twist that pulls at the sense of family and loyalty that has bonded this group. And it is s show made with younger audiences in mind, with splashy special effects, less violence, and more innocence to the romantic complications. It’s a superhero show that the family can watch without fear of a gruesome murder or steamy sex scene.

For that, you can watch Arrow, and the third season is now on Netflix. The second season launched The Flash, in a way, by introducing Barry in episodes 8 and 9, where he contributes a little to the team before returning to Central City. While episode 9 teases his transformation, the actual event occurs in the pilot episode of The Flash.

Arrow: Season 3 introduces two new superheroes. Laurel Lance (Katie Cassidy), the assistant D.A. and former girlfriend of Oliver Queen, aka Arrow (Stephen Amell), follows in the footsteps of her sister to become Black Canary and tech tycoon Ray Palmer (Brandon Routh), the new CEO of Queen Consolidated, creates a high-tech suit that gives him strength, flight, and other powers, and is destined to turn him into The Atom.

Arrow is a mix of dark urban crime show with flamboyant costumed characters and elevated young adult melodrama and continues the structure established in the first season, which includes flashbacks of Oliver Queen’s ordeal during his lost years shipwrecked on an island of assassins. This season pits him against international crime boss and cult leader Ra’s al Ghul, who vows to murder the people Oliver loves unless he takes over the League of Assassins, and makes him a wary ally of Malcolm Merlin (John Barrowman), a villain in his own right but an enemy of Ra’s al Ghul and the father of his Oliver’s sister Thea (Willa Holland). It follows the CW formula of colorful characters, splashy action, romantic complications, and melodramatic tangles, with a superhero noir style: night in the shadowy, crime-ridden city with wet streets, splashes of light, and dark hideouts and lairs. There’s plenty of TV-14 violence and sexual suggestions but nothing explicit.

Even if you don’t watch the show, there are some cross-overs that could be worth your time to check out if you end up hooked on The Flash. In season three, Barry Allen and The Flash appear in episode 1 (“The Calm”) looking for advice, episode 8 “The Brave and Bold,” which results in a genuine hero team-up, and episode 23 (“My Name is Oliver Queen”) in a line-up that could be a proto Justice League.

Queue ’em up: The Flash and Arrow.