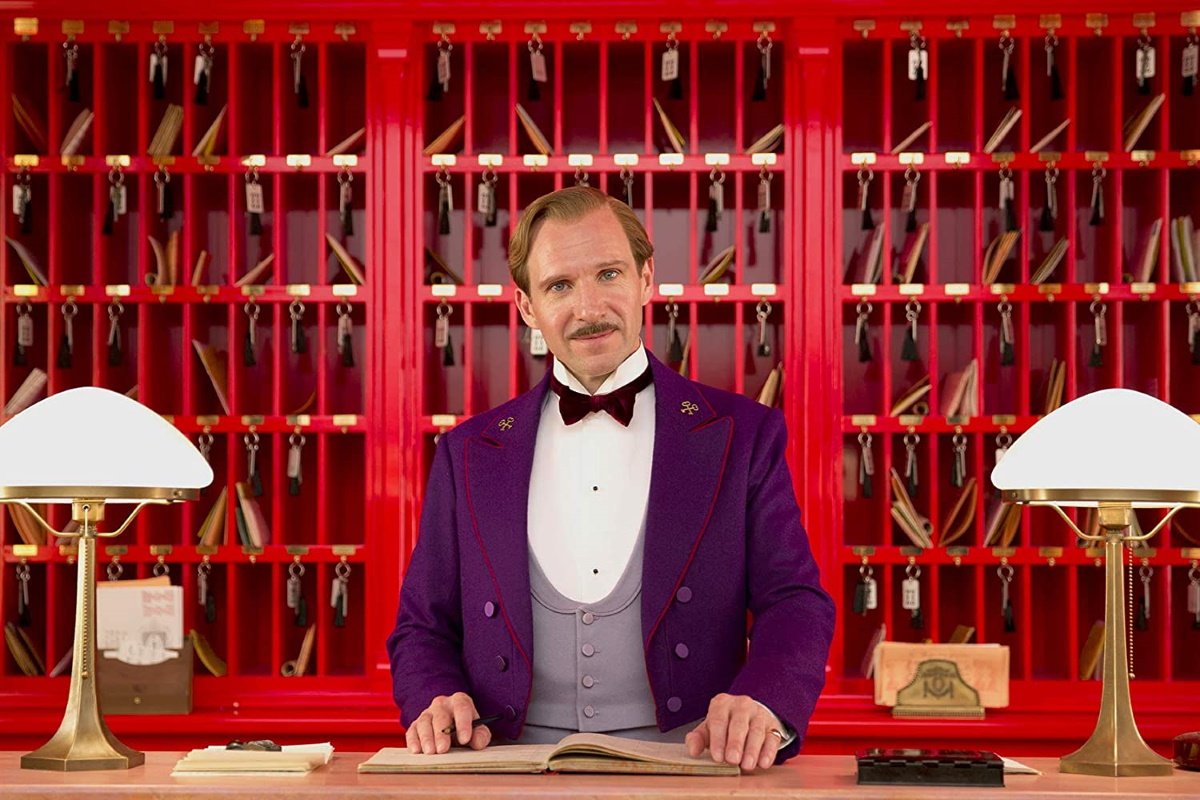 The Grand Budapest Hotel (2014) is an adventure, a murder mystery, an old-world tale, a storybook fable, and a sinister conspiracy. But under the cake-frosting colors and period gilt is a bittersweet story about a way of life hanging on in a world modernizing and passing it by, something frozen in a bygone idea of entitlement and class, while the drumbeat of World War is beating at the border.

Ralph Fiennes stars as M. Gustave, the elegant, chivalrous, and gigolo-esque concierge of The Grand Budapest Hotel, a luxury hotel in the mountains of a fictional European duchy, and he has a deft way with Anderson’s comedy. He’s light and sprightly, with a combination of naturalness and elevated affectation of manner, yet he always comes off as sincere, especially in his paternal affection for young lobby boy Zero (Tony Revolori), who he mentors as his successor.

Anderson and cowriter Hugo Guinness create a fantasy informed by a nightmarish reality, a fictional storybook town in a made up country in a twilight 1930s under the creeping shadow of Fascism. It becomes a backdrop for a comic murder mystery involving a Countess (Tilda Swinton), a conspiracy, and a battle over her inheritance. There’s a delightful romance between Zero and a sweet young confectioner (Saoirse Ronan), a prison break involving the most beautiful pastries you’ve ever seen, and an international brotherhood of concierges who rise to the occasion. But there is also a melancholy under the whimsy that becomes increasingly dire as the ominous undercurrent of this world’s answer to Fascism poisons the culture and leaves a trail of victims in its hateful wake.

There are those who find Anderson’s film in general and this one in particular fussy and twee but I am enchanted by the layering of detail in the imagery and by his affection for the characters, and engaged by the mix of idealized old-world charm and empty privilege. I love his use of old-school miniatures and storybook imagery, and his whimsy and storytelling playfulness makes the tragic elements all the more affecting. For all the fantasy and the horror, it’s ultimately a paean to brotherhood, love, and sacrifice.

The original Blu-ray and DVD releases feature a four-part documentary, a tour of the town conducted by Bill Murray, and other featurettes. The Criterion Collection special edition features commentary by Anderson, filmmaker Roman Coppola, and actor Jeff Goldblum, selected-scene storyboard animatics, an original “making of” documentary, cast and crew interviews, video essays from 2015 and 2020 by critic Matt Zoller Seitz and film scholar David Bordwell, behind the scenes and production footage, and a booklet with essays by critic Richard Brody.