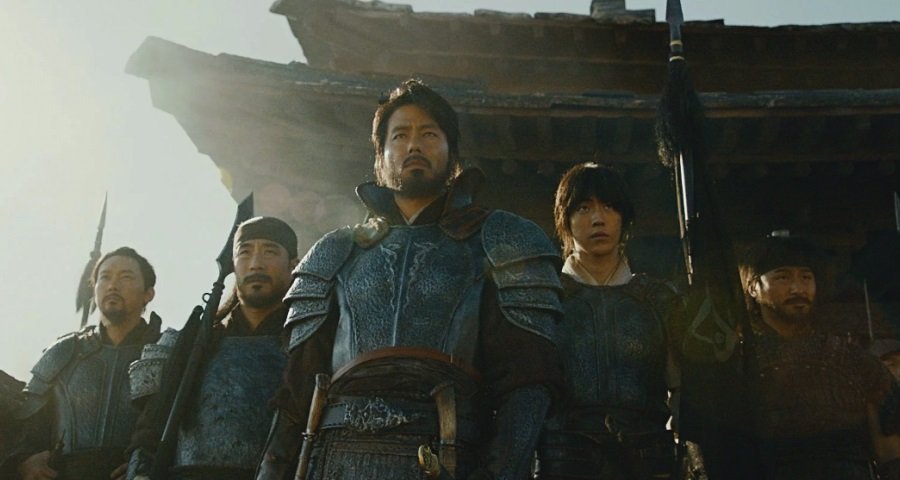 Grandly mounted and filled with sweeping battle scenes, the costume battle epic The Great Battle (South Korea, 2018), retells the true story of the invasion of Goguryeo, a kingdom on the Korean peninsula, by the Chinese Yang Empire in the 600s.

Korean pop star Zo In-sung stars as General Yang, the commander of the Ansi Fortress who refuses to abandon his post despite orders. His 5,000 soldiers are all that stand between the 200,000-strong Yang army and the Goguryeo capitol and he holds them at bay while they construct a towering wall from which to launch an assault on the fort. There is a garrison of female archers, a royal oracle taken prisoner by the invaders, and a holy crossbow that (according to legend) can only be wielded by a god, all of which give the real-life incident a large-than-life treatment.

The scope of the production is impressive, with long shots filled with thousands of soldiers in battle (it appears to be a mix of physical crowds and CGI additions), and there are numerous battle scenes directed with a sharp eye for detail and design, but the script is built on familiar tropes (the loyal lieutenants and soldiers who heroically sacrifice their lives in doomed missions) and the characters lack personality or depth. It lacks the dramatic punch or visual poetry of the best Chinese battle dramas but it’s colorful and swiftly paced and delivers the spectacle it promises.

Not rated, features battle violence and blood, in Korean with English subtitles

On Blu-ray and DVD from Well Go, presented with both original Korean and English language soundtracks and optional subtitles, with two featurettes.