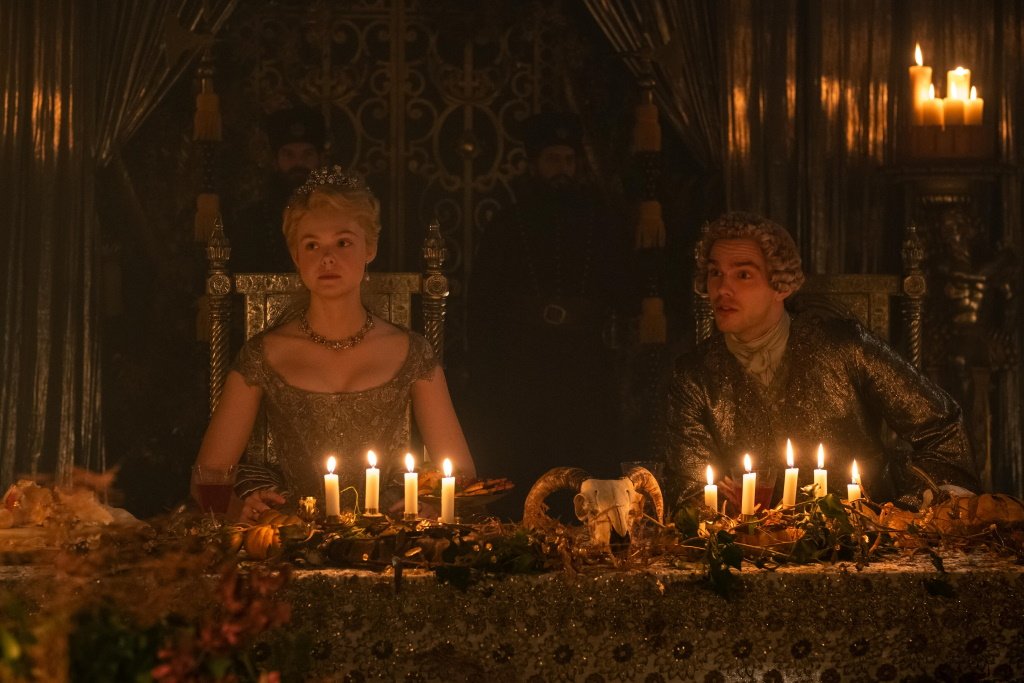 Elle Fanning plays Russian Empress Catherine the Great in “The Great” (TV-MA), a satirical take on the rise of the legendary 18th century ruler. The series, reated by Tony McNamara (Oscar-nominated screenwriter of “The Favourite”), gleefully ignores period accuracy to create a raucous portrait of court intrigue and political machinations as the naïve young bride to the childish and tyrannical Peter (Nicholas Hoult) becomes a savvy political animal. This is costume drama as bawdy slapstick satire, lavishly produced and “intentionally ahistorical,” giving the series permission to mix modern sensibilities with period detail. All ten episodes streaming on Hulu.

The limited series “I Know This Much Is True” (TV-MA), based on the bestselling novel by Wally Lamb, stars Mark Ruffalo as twin brothers: troubled Dominic, who suffers from schizophrenia, and the protective, angry Thomas, who battles to free his brother from the prison Dominic has been sent to after inflicting serious self-harm. Filmmaker Derek Cianfrance (“Blue Valentine”) adapts the novel and directs all six episodes and Melissa Leo, Juliette Lewis, Kathryn Hahn, Archie Panjabi, and Rosie O’Donnell costar. New episodes on HBO each Sunday.

“Becoming” (2020, PG), a documentary portrait of Michelle Obama, follows the former First Lady across the country as she promotes her memoir. Along with exclusive interviews, remembrances, and public appearances, the documentary also shows Obama in conversation with the folks she meets along the way, giving audiences a glimpse into her nature outside of the glare of the national spotlight. Streaming on Netflix.

“Unbreakable Kimmy Schmidt: Kimmy vs. the Reverend” (2020, TV-14) revives the Netflix comedy created by Tina Fey and Robert Carlock for an interactive wedding special that gives audiences power to choose the journey of Kimmy (Ellie Kemper) as she goes up against her nemesis (Jon Hamm) while preparing for her wedding. Tituss Burgess, Jane Krakowski, and Carol Kane are back in the reunion special with guest star Daniel Radcliffe. Streaming on Netflix.

A Sicilian mafia soldier (Pierfrancesco Favino) hiding in Brazil betrays the mob and helps take down the Cosa Nostra in Marco Bellocchio’s “The Traitor” (Italy, 2019, R, with subtitles), a drama based on a true story.

Available direct to VOD is “Capone” (2020, R) starring Tom Hardy as the aging Chicago crime boss as he loses his mind to dementia. Linda Cardellini and Kyle MacLachlan costar in the film directed by Josh Trank. Also new:

Premium VOD: the animated “Scoob!” (2020, PG) tells the origin story of Scooby Doo and Shaggy with a twist of mystery and global apocalypse. The voice case includes Will Forte, Gina Rodrigiez, Amanda Seyfried, and Zac Effron.

A British woman (Larua Haddock) travels to Spain to solve the murder of her DJ brother in “White Lines” (not rated), a crime drama from “Money Heist” creator Alex Pina set in the drug-fueled nineties party culture of Manchester and Ibiza.

The true crime documentary series “Trial by Media” (2020, TV-MA) looks at how key high profile trials have been influence by the TV and newspaper coverage. Six episodes available.

“Have a Good Trip: Adventures in Psychedelics” (2020, TV-MA) is not so much a documentary as a collection of drug stories told by actors, musicians, comedians and writers and illustrated in comic skits and animated sequences.

International TV: an unemployed man (Eric Cantona) leaps at a chance at a corporate job, only to find himself a pawn in an insidious experiment, in “Inhuman Resources: Season 1” (France, not rated, with subtitles). Also new:

Kid stuff: “True – Terrific Tales: Season 1” (TV-Y) is a new incarnation of the animated series for young children. Also new is the fifth season of the animated adventure “She-Ra and the Princesses of Power” (TV-Y7).

The documentary series “Regular Heroes” (2020, 13+) profiles health care workers, first responders, and other essential workers putting themselves on the line during the coronavirus crisis. New episodes each Friday.

Kristen Stewart delivers a superb performance as Jean Seberg, the American movie star who was targeted by the FBI for her Civil Rights activism and hounded into a breakdown, in the otherwise disappointing “Seberg” (2019, R). Jack O’Connell, Margaret Qualley, and Anthony Mackie costar in the Amazon Original feature.

“Downton Abbey” (2019, PG), the big screen sequel to the British TV series, was a surprise hit in the U.S. Think of it as the show’s grandest episode ever.

The documentary “Basketball County: In the Water” (2020, TV-MA) looks at the culture of Prince George’s County, Maryland, that spawned dozens of NBA, WNBA, and elite college basketball players. Also new:

Martin Freeman is a police detective on the trail of a serial killer in “A Confession” (2019, not rated), a limited series crime drama from England. The complete seven-episode series makes its American debut on BritBox.

“It Felt Like Love” (2013, not rated), the debut feature by director Eliza Hittman (“Never Rarely Sometimes Always”), debuts on Criterion Channel along with two of her early short films. Also new: