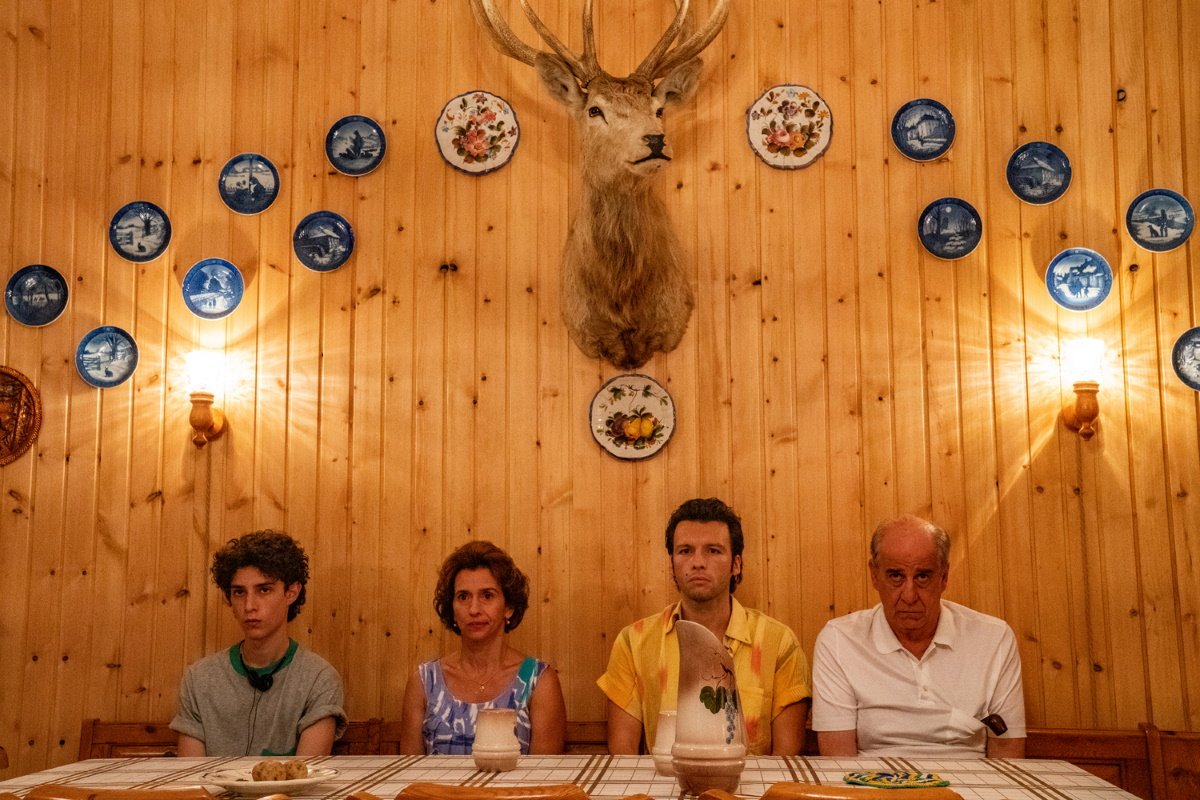 Paolo Sorrentino writes and directs “The Hand of God“ (Italy, 2021, R, with subtitles), a semi-autobiographical drama about a teenage boy (Filippo Scotti) looking to find his place in the world in 1980s Naples. The filmmaker combines light comedy, family drama, big dreams, and vibrant characters with the landscape of Naples and a tribute to Fellini. Toni Servillo (star of Sorrentino’s Oscar-winning “The Great Beauty”) plays the father. (Netflix)

The animated comedy “Ron’s Gone Wrong” (2021, PG) is a buddy film about an awkward kid who programs a giddily malfunctioning robot toy (voiced by Zach Galifianakis) to be his best friend. Along with the zippy comedy is a commentary on the relationship between technology and kids. (HBO Max and Disney+)

“Station Eleven“ (TV-MA), based on the novel by Emily St. John Mandel, is an epic limited series that spans decades, jumping between the years before a devastating pandemic to the post-apocalyptic world where the survivors try to create a new life. Mackenzie Davis and Himesh Patel star. Three episodes available, new episodes on Thursdays. (HBO Max)

A separated, often contentious couple (James McAvoy and Sharon Horgan) end up living in the same house during the early months of the pandemic in “Together“ (2021, R). Filmmaker Stephen Daldry directed the mix of family drama and romantic comedy in 2020 under lockdown conditions. (Hulu)

Will Forte and Kristen Wiig reunite for “MacGruber: Season 1“ (TV-MA), a spinoff of the “Saturday Night Live” spoof of the 1980s action series “MacGyver.” All eight episodes available. (Peacock)

The fantasy adventure “The Witcher“ (TV-MA) settles in with a more straightforward storyline in its second season. (Netflix)

The holiday romances are represented by the Seattle-set “A Christmas Proposal“ (TV-G) with Adam Rodriguez and Jessica Camacho (Paramount+) and “A California Christmas: City Lights“ (2021, TV-PG), a sequel with Lauren Swickard and Josh Swickard (Netflix).

“Days of our Lives: A Very Salem Christmas“ (not rated) is a holiday movie spinoff of the daytime drama. (Peacock).

Matt Damon, Adam Driver, and Jodie Comer star in “The Last Duel“ (2021, R), a medieval drama based on the true story of the last royally sanctioned duel to the death in France. Ridley Scott directs a screenplay by Damon, Ben Affleck (who costars), and Nicole Holofcener. Also on DVD.

Gary Oldman won an Oscar for his performance as Winston Churchill in “Darkest Hour“ (2017, PG-13), which also earned an award for its astonishing make-up. Also arriving this week:

International TV: a misanthropic writer and his startup-founder wife fumble through divorce in the romantic comedy “Decoupled: Season 1“ (India, with subtitles). Also new is the Korean foodie road show “The Hungry and the Hairy: Season 1“ (South Korea, TV-14, with subtitles).

The romantic comedy “With Love: Season 1“ (TV-PG) stars Emeraude Toubia and Mark Indelicato as siblings looking for love across five holidays. Written and created by Gloria Calderón Kellett (who created the modern “One Day at a Time” revival).

The true crime documentary “Dead Asleep“ (2021, not rated) dives into the case of Randy Herman Jr., who was convicted of a murder he says he committed while sleepwalking.

Annie Clark (a.k.a. St. Vincent) and Carrie Brownstein write and star as fictionalized version of themselves in the self-aware “The Nowhere Inn“ (2021, not rated).

Keepers of mythical creatures question whether they should display their rare beasts in the animated fantasy “Cryptozoo“ (2021, not rated), featuring the voices of Lake Bell, Michael Cera, Zoe Kazan, and Peter Stormare.

The documentary “Street Gang: How We Got to Sesame Street“ (2021, TV-14) looks at the origins and early years of one of the most influential children’s programs in television history. Also new:

“Rumble“ (2021, PG), an animated wrestling comedy in a world where monsters are superstar athletes, follow a teenage coach (voice by Geraldine Viswanathan) training a loveable underdog monster (by Will Arnett).

Paramount+ has also added a number of “live” streaming linear channels where you can drop in for continuous streams of TV shows and movies, like TV channels but without the ads (at least for now).

Connie Nielsen and Christopher Eccleston star in “Close to Me: Season 1” (not rated) about a woman who loses a year from her memory. New episodes on Thursdays. (AMC+ and Sundance Now)

“Halt and Catch Fire: Complete Series“ (2014-2017, TV-14), a drama set in the tech industry at the birth of the home computing age, now streams exclusively on AMC+.

Two new documentaries debut: “The Real Charlie Chaplin“ (2021, TV-PG) on the actor/filmmaker who was once the most famous man in the world and “Rolling Like Thunder“ (2021, TV-MA), which delves into the underground world and history of freight-train and graffiti culture.

British drama “The Larkins: Season 1“ (not rated) is a new adaptation of H.E. Bates’ classic novel “The Darling Buds of May” about a family in the 1950s countryside of Kent. New episodes on Mondays.

“Crime: Season 1“ (not rated) stars Dougray Scott as a troubled police detective searching for a missing girl. Based on the novel by Irvine Welsh. All episodes streaming.

The 20-film “Italian Neorealism” collection features such landmarks as Roberto Rossellini’s “Rome Open City“ (1945), Vittorio De Sica’s “Bicycle Thieves“ (1948), and Federico Fellini’s “La strada“ (1954) and the streaming debuts of lesser-known films like “The Mill on the Po“ (Italy, 1949, with subtitles) from filmmaker Alberto Lattuada and “Girl in the Window“ (Italy, 1961, with subtitles) with Lino Ventura. All Italy, with subtitles.

“Throw Down“ (Hong Kong, 2004, not rated, with subtitles), Johnnie To’s drama about the redemption of a former judo champion, is the filmmaker’s tribute to the early films of Akira Kurosawa. Presented with a short documentary and bonus interviews. Also new: