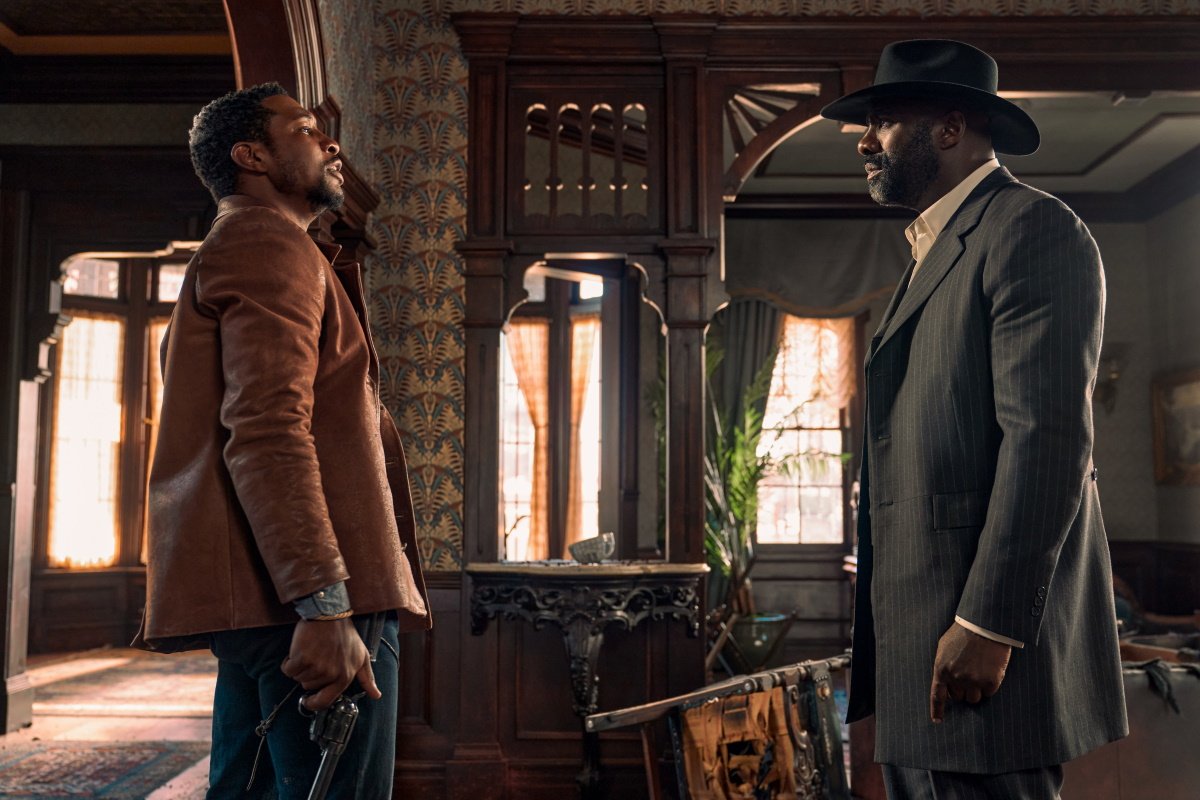 “The Harder They Fall“ (2021, R) draws from real-life characters of the old west to tell a fiction drama of African American cowboys. Jonathan Majors stars as the outlaw leader who reunites his gang to take out an old enemy (Idris Elba) in the revenge thriller directed by Jeymes Samuel and produced by Jay-Z. It’s a classic western tale with contemporary music and a star-studded cast that includes Zazie Beetz, Regina King, Delroy Lindo, and LaKeith Stanfield. (Netflix)

Tom Hanks stars as a robotics engineer in a post-apocalyptic future who creates a robot (Caleb Landry Jones) to look after his dog in “Finch“ (2021, PG-13). The science fiction drama follows the three on an odyssey to across the American wasteland. (Apple TV+)

“Dalgliesh: Season 1“ (not rated) stars Bertie Carvel as the enigmatic detective and poet Adam Dalgliesh in a new British mysteries series based on the novels by P.D. James and set in 1970s England. Two episodes available, new episodes on Mondays. (Acorn TV)

A scientist taps into the brains of the dead in “Dr. Brain“ (South Korea, 2021, TV-MA, with subtitles), a limited series created and directed by filmmaker Kim Jee-woon. New episodes on Fridays. (Apple TV+)

A mysterious man (Winston Duke) interviews souls to determine which will get a chance to be reborn on Earth in “Nine Days“ (2021, R), a metaphysical drama with more questions than answers about life. Also on DVD. Also new:

Keira Knightley is a songwriter and Mark Ruffalo a music producer who helps develop her sound in “Begin Again“ (2013, R), a music drama about creative collaboration from director John Carney.

Jennifer Kent’s “The Nightingale“ (2018, R) is a dark, brutal revenge thriller set on the frontier of early 19th century Australia.

International TV: “Glória: Season 1“ (Portugal, TV-MA, with subtitles) is an espionage drama set amidst the Cold War machinations of 1968 Portugal.

The eight-episode reality series “Tampa Baes: Season 1“ (TV-MA) follows a group of young lesbian friends in a gay hotspot on the Florida shoreline.

The four-part series “Taste the Nation with Padma Lakshmi: Holiday Edition“ (TV-14) looks at traditions through the lens of a different immigrant culture and city, such as Korean New Year in Los Angeles and Cuban Christmas in Miami.

Pedro Pascal (“The Mandalorian”) stars in the indie sci-fi thriller “Prospect“ (2018, R) trying to survive a hostile planet with the help of a young pioneer woman (Sophie Thatcher).

“Head of the Class: Season 1“ (TV-G) reboots the 1980s sitcom with Isabella Gomez in the role of the inspirational teacher of a group of overachieving high school students. The original series starring Howard Hesseman is also available to stream.

A group of veterans form a community to deal with their trauma by creating art in the drama “This is Not a War Story“ (2021, not rated).

International TV: “Queer You Are: Season 1“ (Spain, TV-MA, with subtitles), an autobiographical series created by Roberto Enríquez (aka Bob Pop), tells the story of an overweight, musical-loving teenager growing up in Madrid in the eighties.

Elijah Wood plays the FBI analyst who interviewed Ted Bundy (Luke Kirby) after his conviction in “No Man Of God“ (2021, not rated), based on the transcripts of the interviews.

Greg Davies is a chatty crime scene cleaner in the comedy “The Cleaner: Season 1“ (not rated). New episodes on Tuesdays.

The limited series psychological thriller “Too Close“ (2021) centers on the battle of wills between a forensic psychiatrist (Emily Watson) and a manipulative criminal suspect (Denise Gough).

The documentary “Hollywood Bulldogs“ (2021, not rated) puts a spotlight on the British stunt performers who set the bar for action cinema in the 1970s and 80s. Streams free with ads.

“Fox Noir” spotlights a dozen classics film noirs classics from 20th Century Fox, including the original version of “Nightmare Alley“ (1947) with Tyrone Power, presented with optional commentary and bonus interviews (Guillermo Del Toro’s remake is coming to theaters in December). There are also special edition presentations of “Night and the City“ (1950) and “Pickup on South Street“ (1953) with Richard Widmark and one of the first noir classics (and greatest noir titles of all time) “I Wake Up Screaming“ (1941) with Victor Mature and Betty Grable. (Criterion Channel) Also new: