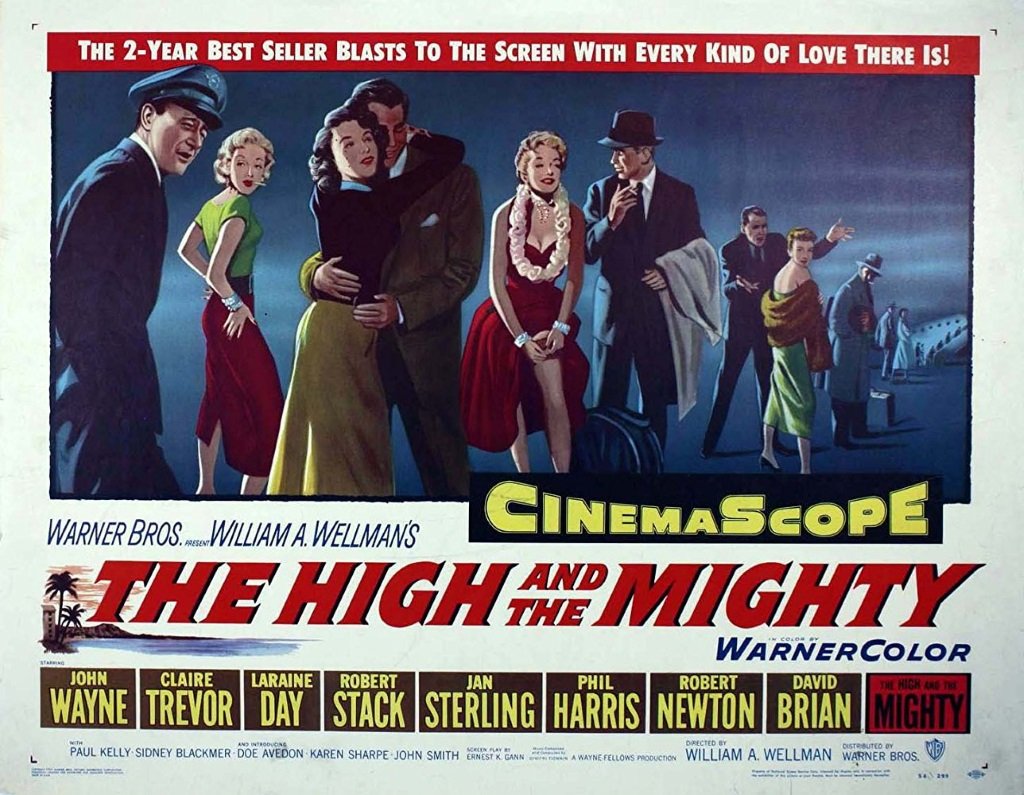 The High and the Mighty was the biggest hit of 1954 and nominated for six Academy Awards (it won for Dmitri Tiomkin’s memorable score). Seen today, this lavish aviation drama falls squarely between Stagecoach and Airport, a large ensemble drama about a mechanical crisis on a Honolulu-to-San Francisco flight where every passenger has a story (complete with flashbacks), the plane faces the added turbulence of personality clashes, and there’s even an angry husband who sneaks a gun on board—this truly is the early days of passenger flights.

John Wayne plays a veteran flier with a tragedy in his past, now reduced to co-pilot to so-tense-he’s-chiseled-rock Robert Stack, and shares the screen with his cast quite magnanimously, playing the quite, confident, solid backbone during the crisis. Claire Trevor (who played opposite Wayne in his breakthrough film Stagecoach) and Jan Sterling (who literally strips away the pancake and lipstick to come face to face with her true face) earned acting nominations for their performances, Phil Harris provides boisterous comic relief, Laraine Day is the stalwart stewardess who endures the blithely sexist comments out of the mouth of every man as if it’s part of the job (now there’s a time capsule), and Robert Newton, David Brian, Paul Kelly, Pedro Gonzales-Gonzales, William Campbell, John Qualen, Ann Doran, and Paul Fix are among the sprawling cast. Ernest K. Gann scripts from his own novel.

Directed by William Wellman, one of the most dependable pros of the classic Hollywood era, and produced by John Wayne’s production company Batjac, this was one of a handful of films that disappeared for decades, never shown on TV or released on videotape. It was finally released to DVD a decade ago and subsequently to VOD.

, iTunes, GooglePlay and/or other services. Availability may vary by service.
The High and the Mighty (Two-Disc Collector’s Edition) [DVD]

Paramount released the film a two-disc deluxe edition with commentary by Leonard Maltin, William Wellman, Jr., Karen Sharpe, Pedro Gonzales-Gonzales and aviation expert Vincent Longo and the feature-length The Making of The High and the Mighty, a multi-part documentary hosted by Leonard Maltin made up of the featurettes “The Batjac Story Part One 1951-1963” (as much about the Wayne filmmaking family as it is the creation of the production company itself), “Stories From the Set,” “On Director William A. Wellman,” “The Music and World of Dimitri Tiomkin,” “Ernest K. Gann: Adventurer, Author, Artist,” “Restoring a Classic,” and “A Place in Film History” (which can be watched straight through or watched separately). Also includes the featurette “Flying in the Fifties,” newsreel footage from the premiere of the film, a still gallery, a montage of Batjac trailers, and the original TV and theatrical trailers.