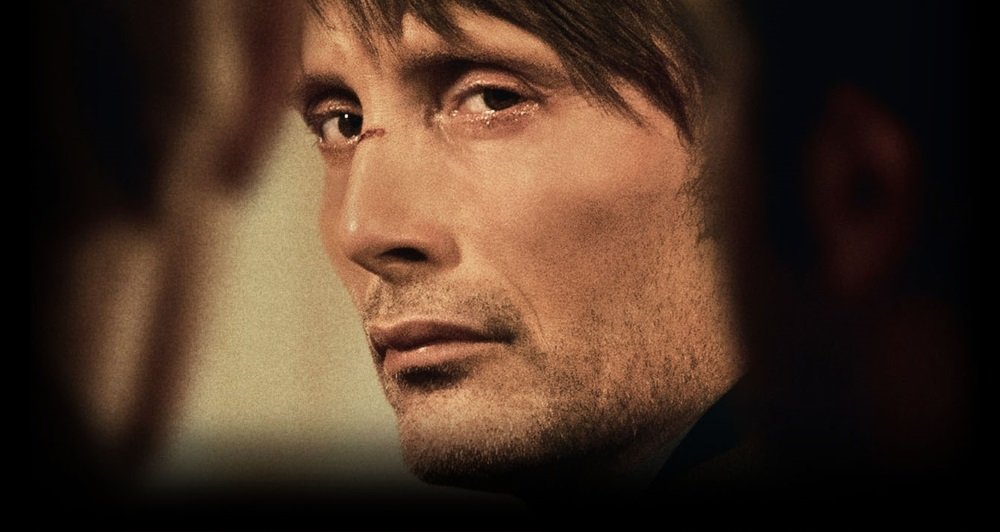 Thomas Vinterberg’s Danish drama The Hunt (2012) is his best film since The Celebration and, no surprise, it mines similar themes and volatile emotions that are churned up the surface.

Mads Mikkelsen stars as a dedicated teaching assistant at a pre-school who, through a misunderstanding, is put under investigation for child abuse, a smoldering suspicion that is fanned into a conflagration as the community passes judgment without waiting for the investigation to conclude. It’s a study in rumor and fear fueling self-righteous hysteria as one-time friends not only turn their back on him, they suddenly feel free to treat him like a convicted war criminal somehow free in a technicality. It’s more of a metaphor pushed to extremes than a realistic portrait, ignoring the gross negligence of supposedly serious and responsible officials and suggesting that the entire town turns a blind eye to the vigilante behavior of its citizens.

What makes The Hunt so affecting is the way Vinterberg jangles the nerves of what first appears to be a strong community of caring neighbors and peels back the cover of civilized behavior to find tribal instincts kicking in. It’s no mistake this all takes place in a small, self-contained community. It’s like an echo chamber with no nearby population center to help absorb and redirect the worst of it. The emotions are raw and primal, not just the townsfolk fueled by a sense of betrayal but Mikkelsen’s abused innocent, fighting back with an equally valid fury of betrayal.

Mikkelsen has played both heroes and villains throughout his career (most recently the icy serial killer Hannibal Lector in the TV series prequel Hannibal) but rarely has a role brought out such gentleness and warmth in him, which makes his spiral into depression and masochistic defiance all the more searing. Lost in all the praise for Mikkelson, however, is the performance by Annika Wedderkopp, a little girl in her sole screen role who offers as piercing and honest a character as that created by Mikkelson. Vinterberg draws out a sense of anxiety in her troubled home, a glow of comfort in the presence of Mikkelson’s gentle attentions, a sincere desire to express her affection for him, and a feeling of dread and discomfort and guilt when she’s put on the spot by the school director and child psychologist. The gravity of the situation is clear to her and she innately knows that she has somehow caused this crisis, even if she doesn’t understand how or why, and the pain is palpable across her cherubic face.

Add to My Watchlist on Prime Video or to My List on MUBI or stream free on Kanopy or on Hoopla, which are available through most public and college library systems.

, iTunes, GooglePlay and/or other services. Availability may vary by service.
The Hunt [Blu-ray]