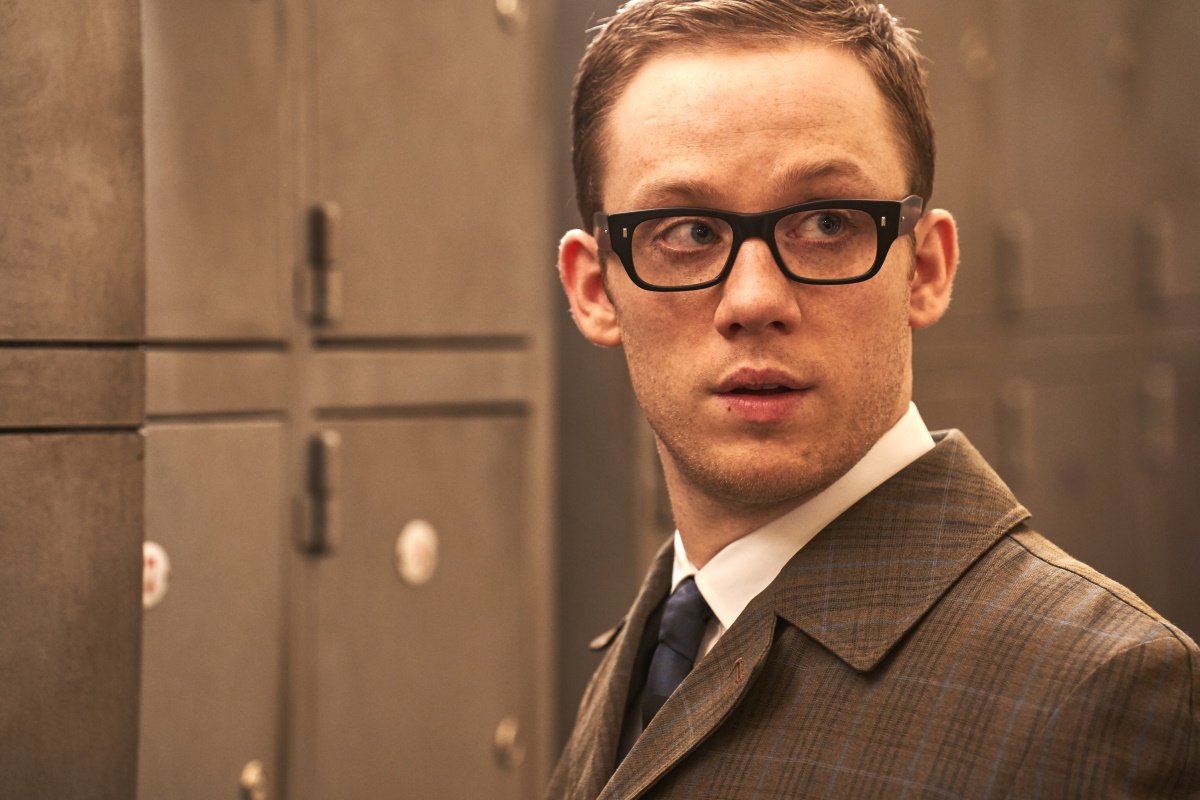 Joe Cole is Harry Palmer, a black market smuggler pressed into becoming a British spy, in “The Ipcress File: Season 1” (not rated), a Cold War thriller about kidnapped atomic scientists, brainwashing, and betrayal in 1960s London. It’s based on the novel by Len Deighton, which was originally brought to the screen in 1965 with Michael Caine as Palmer, and costars Lucy Boynton and Tom Hollander. New episodes on Thursdays. (AMC+)

In the 1980s, Angelyne was an LA pop culture phenomenon thanks to self-promoting billboards and a signature pink corvette. Emmy Rossum plays the buxom blonde bombshell in the limited series “Angelyne” (TV-MA), a drama about the enigmatic self-made celebrity and the birth of famous-for-being-famous influencer culture. Hamish Linklater, Alex Karpovsky, and Martin Freeman costar. (Peacock)

The classic animated kids show is revived in the self-aware “Chip ‘n Dale: Rescue Rangers” (PG), a comedy of the cartoon chipmunk buddies (voiced by John Mulaney and Andy Samberg) reuniting after 30 years to investigate the disappearance of animated characters in the real world. Akiva Schaffer directs Disney’s answer to “Who Framed Roger Rabbit,” costarring Keegan-Michael Key and Charis Parnell and the voices of Seth Rogen, Will Arnett, and J.K Simmons. (Disney+)

Five college friends are brought together by a blackmailer twenty years after another friend was killed in the bilingual limited series “Now and Then” (TV-MA, with subtitles). Rosie Perez stars in multi-layered thriller as the Miami cop back on the case she couldn’t solve twenty years before and José María Yazpik, Marina de Tavira, Maribel Verdú, and Željko Ivanek costar. Three episodes available, new episodes on Fridays. (Apple TV+)

A college student (Alison Oliver) loses herself in an affair with an older married man (Joe Alwyn) in “Conversations with Friends” (TV-MA), based on Sally Rooney’s best-selling novel. Sasha Lane and Jemime Kirke costar. All 12 episodes of the limited series available. (Hulu)

Channing Tatum co-directs and stars in the heartwarming road movie “Dog” (2022, PG-13) as an Army Ranger assigned to take a traumatized service dog across the country to the funeral of fellow soldier. Also on DVD and at Redbox.

The animated fantasies “Belle“ (Japan, 2022, PG), a twist on “Beauty and the Beast” set amongst high school kids in the virtual world, and “Poupelle of Chimney Town“ (Japan, 2022, PG), about a boy who aspires to escape the smoke of his isolated town, are available in both subtitled and English language versions.

The hybrid comedy-documentary series “The G Word with Adam Conover“ (TV-MA) looks at the ways the US government impacts our everyday lives.

“Jackass 4.5“ (2022, TV-MA), a companion film to “Jackass Forever,” features behind the scenes footage and unseen stunts.

Julia Roberts is the concerned mother of a son (Lucas Hedges) fresh out of rehab in “Ben Is Back“ (2018, R).

Streaming TV: “Love on the Spectrum U.S.: Season 1“ (TV-14) is an American take on the Australian reality series about autistic people navigating the world of dating and relationships. Also new:

International passport: “The Perfect Family“ (Spain, 2022, TV-MA, with subtitles) mines comedy from the collision of two very different clans brought together by romance.

Kid stuff: “The Boss Baby: Back in the Crib: Season 1“ (TV-Y7) is the latest spin-off in the animated series.

The romantic comedy “The Valet“ (2022, TV-14) stars Samara Weaving as a movie star who enlists a valet (Eugenio Derbez) to pose as her boyfriend and drags the working class guy into the world celebrity. It’s a remake of the hit 2006 French movie.

Tim Roth and Charlotte Gainsbourg are siblings whose relationship is rocked by a death in the family in “Sundown“ (2021, R).

International TV: a widow rediscovers her own passion while exploring the secret life of her dead husband in “The Ignorant Angels: Season 1“ (Italy, with subtitles). Filmmaker Ferzan Özpetek adapts his own 2002 movie. Also in an English dubbed version.

Rose Leslie stars as “The Time Traveler’s Wife“ (TV-MA) and Theo James is the love of her life in this limited series romantic drama, the second screen version of Audrey Niffenegger’s bestselling novel. His unusual disorder sends him dropping in and out of different stages of her life, including meetings with her as a child, which is more than a little creepy. New episodes on Sundays. (HBO Max)

The music of Bruce Springsteen crosses the Atlantic in “Blinded by the Light“ (2019, PG-13), a rousing high school drama of identity and the creative spirit, based on the true story of a first generation Pakistani-Briton in a small factory town in 1980s England.

Clint Eastwood directs and stars in “The Mule“ (2018, R), a drama based on the true story of an octogenarian drug runner for a Mexican cartel.

The documentary “George Carlin’s American Dream“ (2022, TV-MA) celebrates the life, career, and legacy of one of the most influential comedians of the twentieth century.

A middle-aged couple (Sissy Spacek and J.K. Simmons) discover a secret chamber that transports them to a strange, barren alien planet in “Night Sky: Season 1“ (2022, TV-14), a science fiction thriller with a conspiracy twist. All episodes streaming.

In “Firestarter“ (2020, R), the second film based on the novel by horror legend Stephen King, Zac Ephron stars as a father protecting his adolescent daughter, who can control fire with her mind and turn it into a weapon, from a shadowy government organization. Also in theaters.

A young witch in 19th-century Macedonia takes on the identities of peasants to learn about living as a human in “You Won’t Be Alone“ (Serbia, 2022, R, with subtitles), starring Noomi Rapace, Anamaria Marinca, and Alice Englert.

The three-part documentary “Black Gold“ (2022, not rated) explores a corporate conspiracy to bury and discredit evidence its own scientists uncovered to protect a trillion-dollar oil industry.

John Wayne and James Stewart star in the western classic “The Man Who Shot Liberty Valance“ (1962).

In the science fiction thriller “Dual“ (2022, R), Karen Gillan stars as a woman facing a terminal illness and the clone she creates, who wants to live when the woman recovers.

French filmmaker Arnaud Desplechin adapts Philip Roth with “Deception“ (France, 2021, with subtitles), starring Denis Podalydès as an American writer in London having an affair with a married woman (Léa Seydoux).

The Australian murder mystery “Troppo: Season 1“ (not rated) stars Thomas Jane as an ex-cop hiding out in the remote tropics of Queensland, where he gets drawn into investigating a murder with local PI (Nicole Chamoun). Free with ads.

“France’s Everyman: 10 Films Starring Jean Gabin” includes to the actor’s most iconic performances, as the working class POW in Jean Renoir’s “Grand Illusion“ (France, 1937) and the seductive underworld legend in “Pépé le moko“ (France, 1937), along with “Moontide“ (1942), one of his only Hollywood productions, and the heist film “Any Number Can Win“ (France, 1963) costarring Alain Delon.