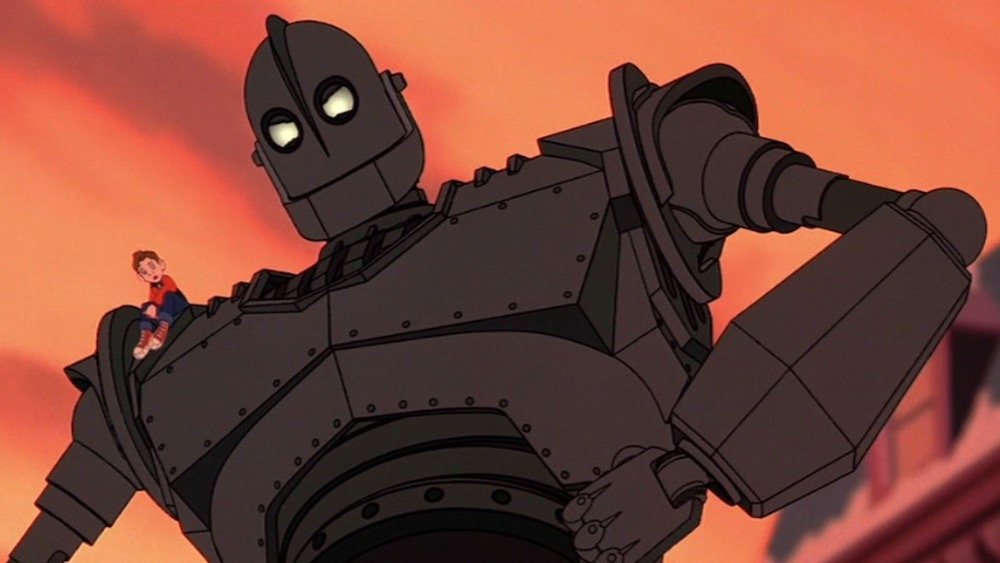 “I’m the luckiest kid in the world,” cheers adolescent Hogarth, halfway to sci-fi heaven in the hand of a friendly ten story robot— a clanking metal man who acts like a combination little brother, big brother, and playful puppy dog all rolled into one magnificent structure who looks like he stepped off a vintage cover of “Amazing Stories”—as they march through the forest of his rural coastal Maine town in search of scrap metal.

The giddiest moments of The Iron Giant (1999), a delightful throwback to the classic era of hand-drawn animated movies, deliver the most amazing little boy wish fulfillment fantasies. But there’s much more to Brad Bird’s cartoon fable in science fiction clothing and fairy tale trappings, a free adaptation of the Ted Hughes children’s novel The Iron Man.

Hogarth (voiced by Eli Marienthal), the imaginative but lonely son of a single working mother (Jennifer Aniston), befriends the runaway robot with a simple act of kindness and courage and, with the help of his new grown-up buddy Dean (Harry Connick Jr.), an easy-going beatnik artist in basic black, teaches the metal-eating behemoth how to talk and, with the help of his comic book collection, gives him a role model. With his head cocked like a puppy and big, dumb smile emerging from his hinged jaw and pale white eyes, the Iron Giant repeats the words “Sooper-man” like a boy caught up in his play fantasy. (That booming but warm voice, by the way, belongs to Vin Diesel.) But this idyll can’t last with Agent Manley (Christopher McDonald), a self-important bureaucratic boob tracking every half-eaten vehicle (metal, scrap or otherwise, is the diet of the voracious robot) across the Maine countryside.

Using the conflicts inherent in its 1957 setting, The Iron Giant twines nostalgic simplicity and rural serenity with cold war paranoia and space age fears (this is the height of Sputnik-mania) and a hep mix of wild and mellow beatnik cool. Bird quite beautifully combines the utopia of summer fun and unconditional friendship, a child’s paradise of innocence and trust, with the fall from grace represented by the paranoid government agent who sees conspiracies, invasions, and America’s compromised security with every piece of evidence.

The sleek, stylized, deceiving simple animation design has the retro look of 1950s futurism with comic book color, closer to the angular deco look of the 1990s animated Batman series than the glossy CGI features that have taken over the animation industry. Kids respond to the wish fulfillment fantasy and giddy friendship while the fun house mirror look at the politics of fear is a timeless theme, but the heart of the film is a simple message of love and sacrifice that cuts across all ages: “You are what you choose to be.” It may be the last masterpiece of American cel animation.

Leaves HBO Max at the end of September. Add to My List on HBO Max

, iTunes, GooglePlay and/or other services. Availability may vary by service.
The Iron Giant: Signature Edition [Blu-ray]

The Blu-ray and DVD releases from Warner Bros. feature in-depth yet viewer-friendly commentary by Brad Bird and three key collaborators, who take the viewer through the animation process from plotting and scripting to animated storyboards to character animation with their comments, and the documentary “The Making of The Iron Giant” hosted by Vin Diesel. There are also eight deleted scenes (including a longer opening scene) shown in rough “animatic” form, a “Behind the Armor” viewing mode with thirteen bite-sized mini-documentaries, rough storyboards from early versions of two scenes with an introduction by storyboard artist and creative consultant Teddy Newton, a brief featurette on “The Voice of the Giant” with Vin Diesel, and stills. Also (on the DVD at least) check the kid-friendly Easter Eggs hidden on the Special Features menu for a letter from Ted Hughs (hint: click the portable projector screen).

Pingback: What to stream: 'The Florida Project' on Amazon Prime Video, 'Troy' falls on Netflix, and a new month of releases for all - Stream On Demand
Comments are closed.