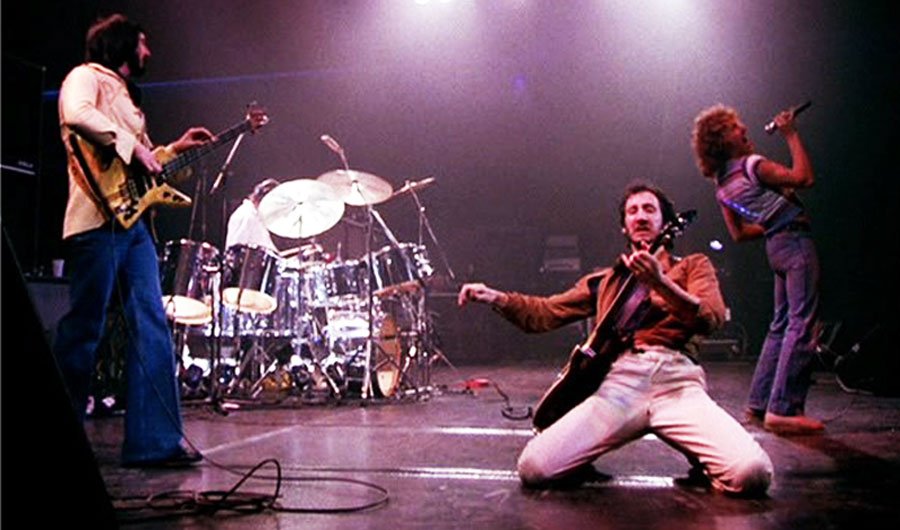 There isn’t another rock documentary in the world like The Kids Are Alright (1979). This is no familiar biographical narrative or historical overview talking about their generation, but a scrappy, vibrant musical portrait painted in the bold colors of rock itself: impassioned lyrics, power chords, crashing drums and smashing guitars.

Die-hard fans of The Who argue that they were the most exciting live band in the world (or at the very least in the world of rock and roll). Director Jeff Stein dedicated himself to capturing the essence of band through performance, onstage and off.

The Kids Are Alright features no narrator, no conventional interviews, no intimate confessions of artists reflecting back on a life of music. Stein pulls his portrait almost exclusively from archival sources – concert footage, TV appearances, skits, talk show interviews. He slips back and forth through their career from 1965 to 1978, contrasting the nerdy-looking boys energetically performing early hits on pop programs like Ready, Steady, Go! and Shindig with the dangerous rockers charging up the crowds at Woodstock and Monterey Pop and the rock legends pumping out “Baba O’Reilly” in 1978 with the dynamism of veterans transformed by the power of their own music.

The entire film maintains that spirit and energy, and it explodes in the climactic private concert performance of “Won’t Get Fooled Again” staged for the film at Shepperton Studios for a crowd of 300 fans. The exhausted band was furious for having to return to the stage for one more song and channeled their anger into rock and roll. The performance is rejuvenating: Roger Daltry belts out the lyrics with primal energy, Townsend bounces and struts and finally slides across the stage like a teenager and Moon recaptures the drum punk of old in his blistering attack on the drum kit. It’s a thrilling climax to the liveliest, most dynamic portrait of a band – or any artist, for that matter – preserved on film. Rock is dead. Long live rock.

, iTunes, GooglePlay and/or other services. Availability may vary by service.
The Who – The Kids Are Alright [DVD]

The Who – The Kids Are Alright: Special Edition [DVD]

On DVD from Pioneer with commentary by director Jeff Stein and a gorgeous 32 page booklet with the kind of details you get in the best CD liner notes. The “Special Edition” features a second disc with almost 100 minutes of multi-camera angle footage performances of “Baba O’Reilly” (four separate angles) and “Won’t Get Fooled Again” (six angles), one of the highlights of the disc, along with an excruciatingly detailed 40-minute documentary on the making and remastering of the DVD and before and after comparisons of the audio and video restoration, plus video interviews with Roger Daltrey (charmingly candid and very entertaining) and director Jeff Stein, “The Ox” audio feature with an isolated audio track of John Entwistle bass lines, and an interactive map tour of The Who’s London.