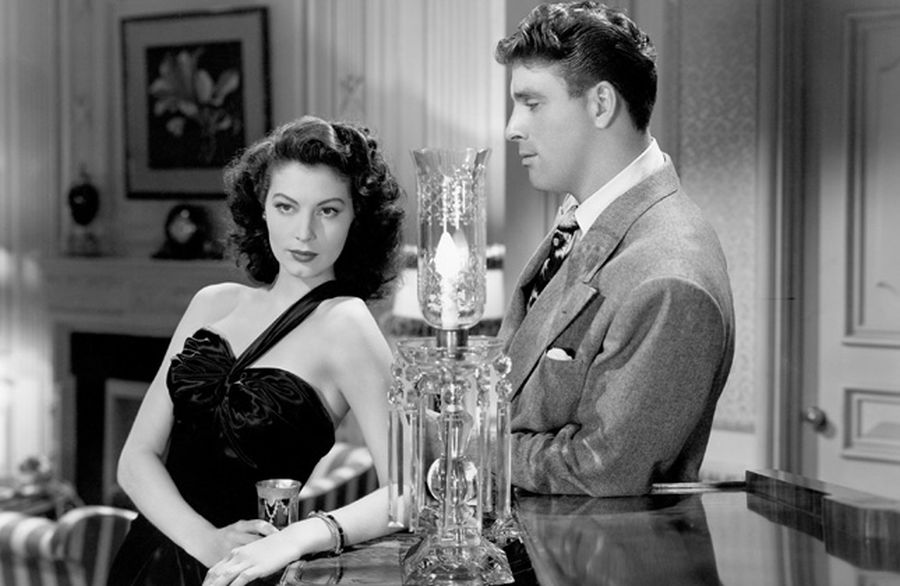 The first 15 minutes of Robert Siodmak’s The Killers (1946) remains the most the most faithful adaptation of Ernest Hemingway ever put on screen.

Two gunmen from the city (Charles McGraw and William Conrad) take over a small town diner to wait for their target. When he doesn’t show, they take the hit to him, and he just waits, broken and hopeless, for them to come and finish him off. Burt Lancaster made his film debut in the role of Swede Anderson and his entrance—a close-up of a haunted face doused in shadow with slashes of light catching his wounded expression as he lay back down on his bed, awaiting his execution with doomed resignation—is one of the greatest screen debuts any performer has received.

Hemingway’s story ends there for all intents and purposes but it’s only the beginning of the film, which as pure Hollywood invention from then on. An insurance investigator (Edmond O’Brien) wonders why Swede never tried to run and tracks his story back to a life as a former boxer turned petty criminal, a not-too-bright kid who fell in love with a calculating golddigger (Ava Gardner, shedding her ingénue image to play a slinky sexpot with a heart of ice) and fell in with a crew that pulled off a big payroll heist. The money was never recovered.

The story is pieced together in flashbacks provided by witnesses and partners in crime, including the heist itself, a remarkably understated piece of filmmaking presented in a single shot. the steady, dispassionate narration of the witness provides counterpoint to the crack timing and brutal efficiency of the job. But the web of deceit and double crosses of the story and expertly-constructed screenplay by Anthony Veiller (with uncredited assist by John Huston) works thanks to the atmosphere of doom and duplicity created by Siodmak and his crew, and to the defining presence of Lancaster and Gardner.

To be honest, their inexperience shows. Lancaster, who doesn’t carry the weight of experience, is rather callow, a perfect patsy but less tragic than merely dumb. Gardner is a kitten playing a viper, a pretty face and slinky body without that strength in her voice to carry her malevolence. They offer neither depth nor complexity (qualities they bring in spades to future roles) but the camera loves them, every curve of their bodies, every shadow on their faces. Siodmak turns their images into icons: the wounded romantic with a beefcake build, and the temptress pulling the heartstrings of innocents merely by staring up from under those long lashes in a calculated nonchalance. Surrounded by seasoned pros (Sam Levene, Albert Dekker, Vince Barnett, Jack Lambert, and Jeff Corey) and lit with the light and shadow of noir master Woody Bredell, the films takes the spark they carry—Lancaster’s brooding ambition and wounded innocence, Gardner’s smoldering sensuality and crafty flirting—and lights a bonfire with them.

It was nominated for four Academy Awards, including best director Robert Siodmak and the adapted screenplay by Anthony Weiller, and added to the National Film Registry in 2008.

The Criterion special edition on Blu-ray and DVD is an ingenious double feature Don Siegel’s 1964 remake and includes yet another version of Hemingway’s short story, this one Andrei Tarkovsky’s faithful student film Ubijtsi (1956), an audio interview with writer Stuart M. Kaminsky (author of “Don Siegel: Director”) and a video interview with Clu Gulager (both recorded in 2002), the 1949 “Screen Director’s Playhouse” radio adaptation of the original film with Burt Lancaster and Shelley Winters (audio only), Stacy Keach reading Hemingway’s original short story (audio only), an audio-only excerpt from Don Siegel’s autobiography read by Hampton Fancher, and fold-out inserts with essays by Jonathan Lethem and Geoffrey O’Brien.