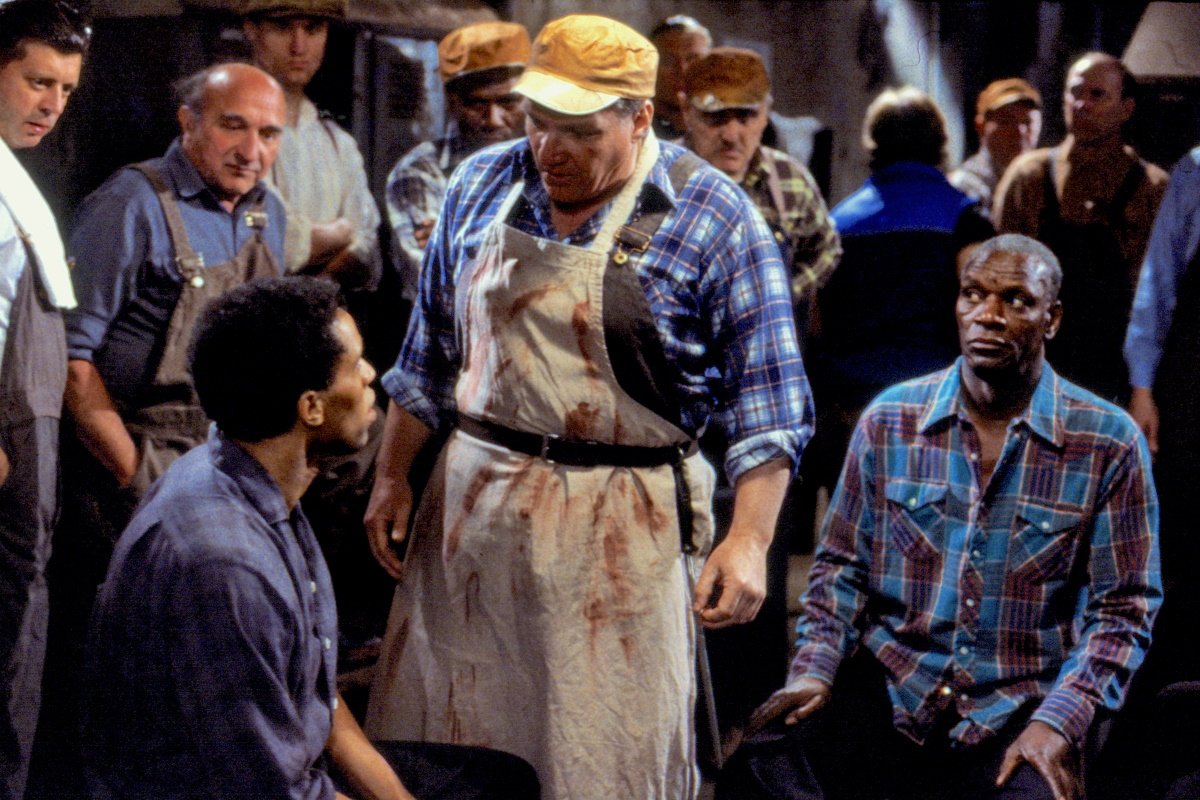 The Killing Floor (1984) is the slaughterhouse of the Chicago stockyards where Mississippi sharecropper Frank Custer (played by Damien Leake) finds work when he heads north for better opportunities during World War I. Working his way up to better-paying work as a butcher, he brings his wife (Alfre Woodard) and kids to Chicago, but he finds even more meaning in his efforts to integrate the previously white union.

It’s based on real events and real-life people, from Frank to union organizer Bill Bremer (Clarence Felder), a white man trying to overcome the racial divisions in the workplace, and anti-union agitator “Heavy” Williams (Moses Gunn), paid by the meat-packing companies to stop the African-American employees from joining the unions.

But the drama is centered on Frank’s journey from naïve country boy in the city to idealistic activist struggling to bridge the racial divide and caught somewhere between his black coworkers and the white union leadership. Through his eyes we see the national politics and the economic forces informing the fight for unionism and the way the meat-packing companies stir up racial divisions to break the union influence, culminating in the terror of the 1919 Chicago race riots.

Actor Bill Gunn made his feature directing debut (after numerous helming numerous episodes of episodic TV) with the film, which he shot on location in Chicago on 16mm film. It was an original production for the PBS showcase American Playhouse but it also played at the Cannes and Locarno Film Festivals and won the Special Jury Prize in an early incarnation of Sundance. Gunn gives it a rich, dense quality more like an independent feature than a TV movie, capturing the grit of 1910s life

It was restored and revived in 2020 just as the pandemic closed theaters, and this restoration is now available on disc and digital.

, iTunes, GooglePlay, Fandango, Vudu and/or other services. Availability may vary by service.
The Killing Floor [Blu-ray]

On Blu-ray and DVD from Film Movement, with a video introduction by director Bill Duke, a Q&A with actor Damien Leake and writer/producer Elsa Rassbach, the 14-minute featurette “The Making of The Killing Floor: Pandemic Era Conversations” with actors Leake and Clarence Felder, director Duke, and producer Rassbach (recorded over Zoom), an interview with Rassbach, and a booklet with two essays.