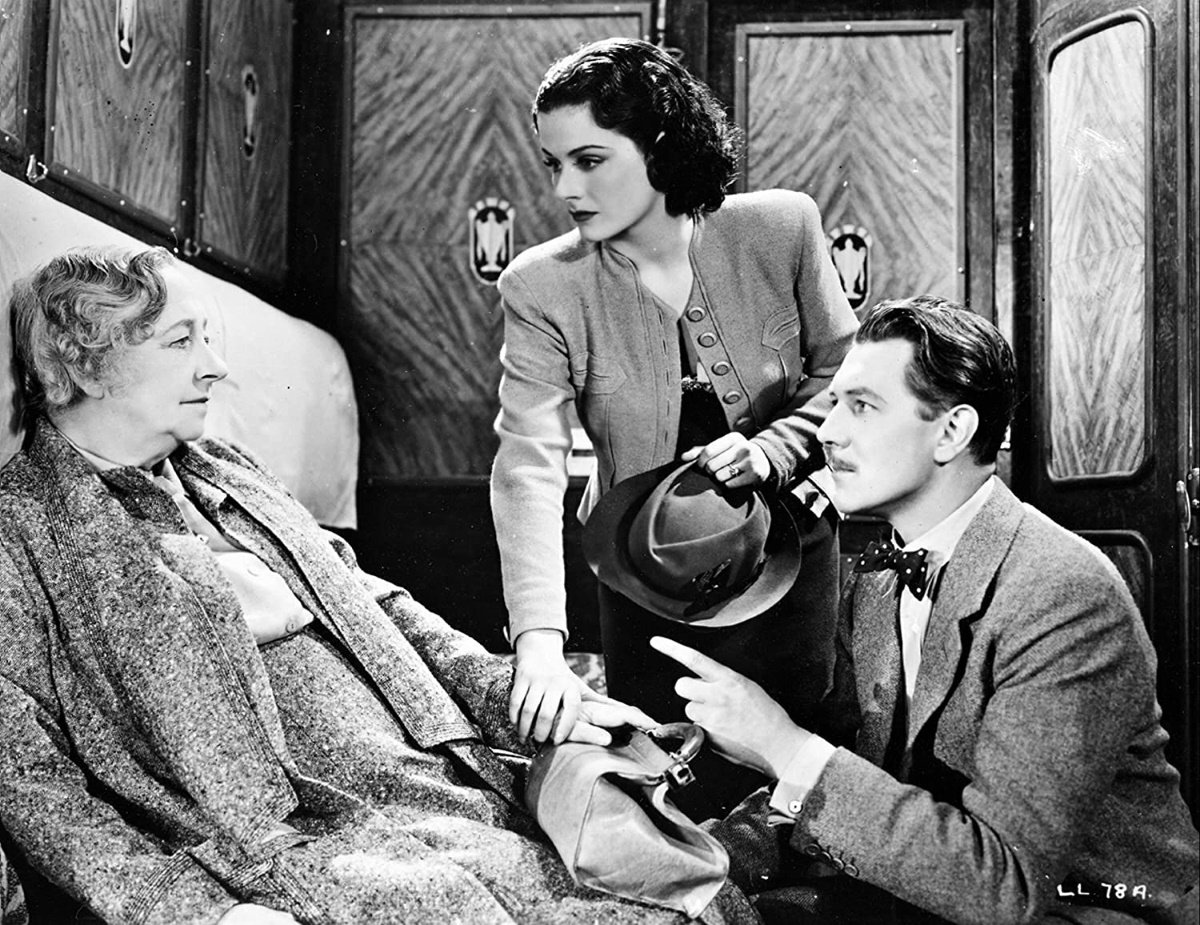 Alfred Hitchcock patented the romantic thriller with The Lady Vanishes (1938), a bright, breezy confection that takes his quirky cast (and the audience along with them) from an idyllic picture postcard of fantasy Europe to a nightmarish journey to the heart of the dark days of World War II that lay just ahead.

This snappy, sophisticated romantic thriller begins innocently enough as a contingent of eccentric tourists spend the night in a picture postcard village inn nestled in the Swiss Alps before setting off on their train the next morning. In a wonderfully Hitchcockian twist on “meeting cute,” attractive young Iris (Margaret Lockwood) clashes with brash music ethnomusicologist Gilbert (Michael Redgrave) when his nocturnal concerts give her no peace. She gets him kicked out of his room so he barges in on hers.

It’s loathing at first brush, but those kinds of sparks ignite the fires of romance when they end up on the same train and team up to search for the kindly old Mrs. Froy (Dame May Whitty), a charming old spinster who no one seems to remember after she disappears from Iris’s train car without a trace. No one is as they seem but sorting out the villains from the merely mysterious is a challenge in itself as our innocents abroad face resistance from the entire passenger list.

Hitchcock effortlessly navigates this vivid thriller from light comedy to high tension and back again, creating one of his most enchanting and entertaining mysteries. The script by Sidney Gilliat and Frank Launder is tight and witty and filled with oddball characters, brought to life by a seasoned cast of character performers like Paul Lukas and Googie Withers. The show is almost stolen by Naunton Wayne and Basil Radford as twitty cricket fans Charters and Caldicott desperately searching for the latest scores (they reprised their characters in more than one film). Though this wasn’t Hitch’s final British film before departing for Hollywood (that honor goes to Jamaica Inn), I prefer to think of this as his fond farewell to the British Film Industry.

This is a film that you can find on almost any streaming service (it’s one of the free films on Hulu, with commercials) and all over YouTube, but those copies vary in quality and most are pretty awful and douses with hiss. We will only recommend streaming options of superior quality.

Criterion offers three reasons why The Lady Vanishes is worth your time.

The Criterion Collection special edition on DVD and Blu-ray features commentary on the film by Bruce Eder and the bonus 1941 film Crook’s Tour, a silly little British espionage comedy with Wayne and Radford reprising the characters Charters and Caldicott as lead characters for the first time. Here, the world travelers are mistaken for spies in the Middle East and passed secret information by a Nazi saboteur. What follows is veddy British, with plenty of jokes made at the expense of Radford’s “horse-faced” sister (Noel Hood) and more cricket references than any American should ever have to wade through. Also features the video essay “Mystery Train” by film scholar Leonard Leff, audio excerpts from François Truffaut’s legendary 1962 interview with Hitchcock, a gallery of stills and art, and a booklet with essays by critic Geoffrey O’Brien and Hitchcock scholar Charles Barr.