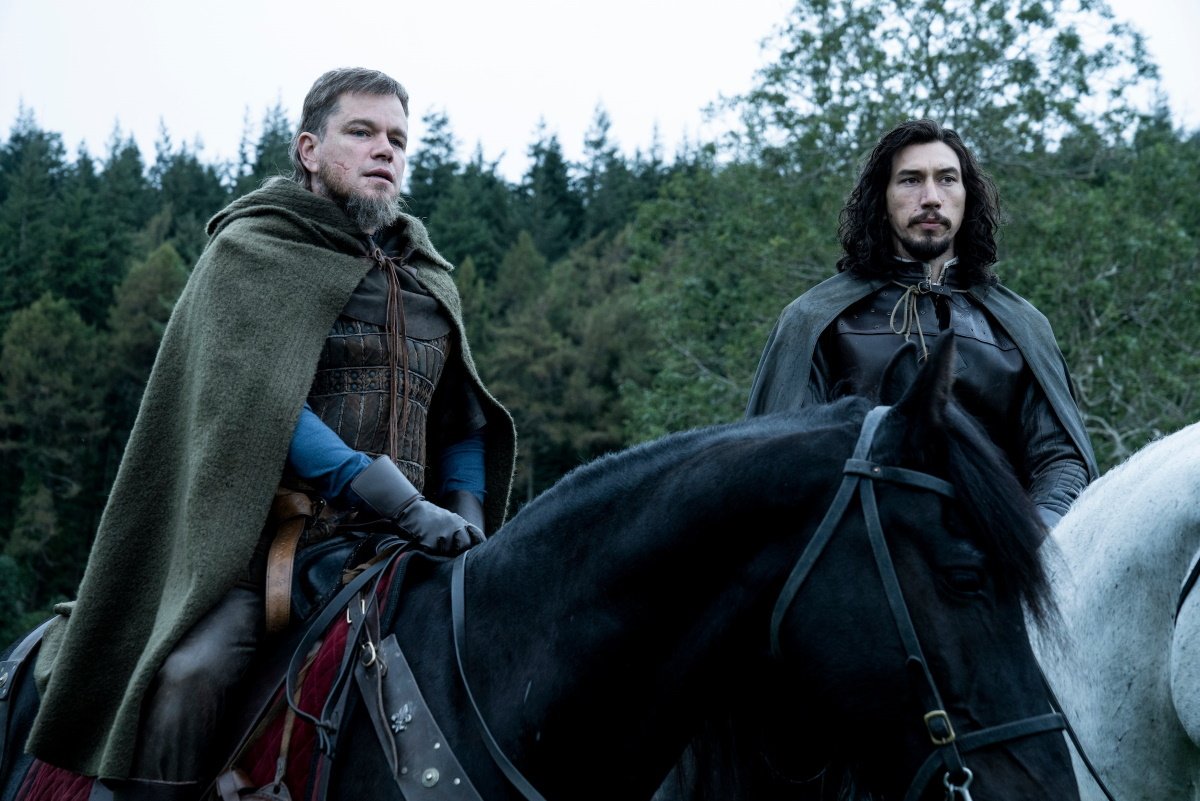 Matt Damon, Adam Driver, and Jodie Comer star in “The Last Duel“ (2021, R), a medieval drama based on the true story of the last royally-sanctioned duel to the death in France, told from the different perspectives of the three protagonists. It’s been compared to Kurosawa’s “Rashomon” but this perceptive screenplay by Nicole Holofcener, Damon, and costar Ben Affleck (superb as a libertine aristocrat) uses point of view not to show how everybody lies but rather explore how their truths reflect power, status, ego, and pride of those telling and the assumptions of the culture around them. Ridley Scott directs, and it’s the best he’s made in years. (HBO Max)

A good deed and a well-intentioned white lie unravel in “A Hero“ (2021, Iran, PG-13, with subtitles), Asghar Farhadi’s drama of a man (Amir Jadidi) on leave from prison whose attempts to clear his sentence tangle his loved ones in a scandal. It’s not a thriller but the twists of the story create a palpable tension, in part because there are no real heroes or villains in Farhadi’s story, just people making mistakes while trying to do the right thing as they see it. It won two awards at Cannes and is Iran’s submission to the Academy Awards. (Amazon Prime Video)

In the political thriller “Munich: The Edge of War“ (2022, PG-13), a British civil servant (George MacKay) and a German diplomat (Jannis Niewöhner) try to stop the course of World War II. Liv Lisa Fries and Jeremy Irons costar in the adaptation of the Robert Harris novel. (Netflix)

Two new sitcoms debut: “Single Drunk Female“ (TV-MA), a comedy about addiction and recovery starring Sofia Black-D’Elia as a young woman forced to move back home with her mother (Ally Sheedy) (new episodes on Fridays), and the sitcom sequel “How I Met Your Father“ (TV-14) with Hillary Duff (two episodes available, new episodes on Tuesdays). Both on Hulu.

“Ozark“ (TV-MA), starring Jason Bateman and Laura Linney as TV’s most unlikely crime family, returns with half of the fourth and final season’s episodes. (Netflix)

Wes Anderson’s “The French Dispatch“ (2021, R) pays tribute to the final issue of an American magazine headquartered in a fictional French city in the late 1960s.

Daniel Day-Lewis plays a perfectionist British clothing designer in “Phantom Thread“ (2017, R), a quiet, exacting mix of “portrait of the artist” and psychological drama from Paul Thomas Anderson. Day-Lewis announced that this was his final screen performance and it earned him an Academy Award nomination, one of the film’s six nominations (it won for costume design). Also stars Lesley Manville and Vicky Krieps.

A New York hairdresser falls for a prince while working at his wedding in the romantic comedy “The Royal Treatment“ (TV-PG) with Laura Marano and Mena Massoud.

True stories: the limited series “The Puppet Master: Hunting the Ultimate Conman“ (TV-MA) looks at a conman who masquerades as a British spy.

International passport: an orphaned girl attempts to connect with her distant uncle in “My Father’s Violin“ (2022, Turkey, TV-14, with subtitles).

Kid stuff: “That Girl Lay Lay: Season 1“ (TV-G) is a kids comedy about an online avatar come to life.

The touching “Marjorie Prime“ (2017, not rated) stars Lois Smith as an elderly widow with a fading memory and Jon Hamm as the holographic companion who channels her dead husband. This sci-fi tinged drama of mortality, memory, and loss also stars Geena Davis and Tim Robbins.

International TV: “Rebecca: Season 1“ (France, not rated, with subtitles), a remake of the British crime drama “Marcella,” stars Anne Marivin as a police detective obsessed with tracking a serial killer.

In the limited series crime thriller “On the Job“ (Philippines, not rated, with subtitles), a crime syndicate temporarily releases convicts to carry out political assassinations.

True stories: “The Murder of Fred Hampton“ (1971, not rated) explores the killing of the Illinois Chapter of the Black Panther Party, later dramatized in the movie “Judas and the Black Messiah.”

The animated “Supernatural Academy: Season 1“ (TV-PG) is… well, it’s all in the title. All episodes streaming.

“Twilight“ (2008, PG-13) and the entire young adult franchise of vampires in love with Kristen Stewart and Robert Pattinson are now streaming.

Two priests (Luis Gerardo Méndez and Miguel Angel Silvestre) sent by the Vatican investigate reports of miracles in “The Envoys: Season 1“ (Argentina, not rated, with subtitles).

True stories: “Vaxxed Nation“ (2021, not rated) examines Israel’s roll-out of the COVID-19 vaccine, the earliest and fastest in the pandemic.

An Irish-American detective back from the Civil War goes looking for his missing family in “Copper: Complete Series“ (2012-2013, TV-MA), a cop drama set in 19th century New York City.

Samuel L. Jackson narrates “The Fix“ (TV-MA), a limited series documentary about the impact of addiction and the drug war in America. Free with ads.

The 2022 Sundance Film Festival opens this weekend. “Sundance Class of ’92: The Year Indie Exploded” jumps back thirty years with a collection of 25 films, from American indie landmark “Gas Food Lodging“ (1992, R) from Allison Anders to groundbreaking queer features “The Living End“ (1992, not rated) from Gregg Araki and Christopher Munch’s “The Hours and Times“ (1991, not rated) to Sundance winning documentary “Brother’s Keeper“ (1992, R). And just for fun, the Cesar-winning dark comedy “Delicatessen“ (France, 1991, with subtitles) from Jean-Pierre Jeunet and Marc Caro.

Kate Beckinsale and Chloë Sevigny star in “The Last Days of Disco“ (1998, R), Whit Stillman’s drama set in the early-eighties Manhattan club scene. Presented with interviews and other extras from the special edition disc.

The New York indie “What About Me“ (1993, not rated) explores life on the margins of the East Village, with a cast that includes New York counterculture figures Richard Hell, Nick Zedd, Johnny Thunders, and Dee Dee Ramone.