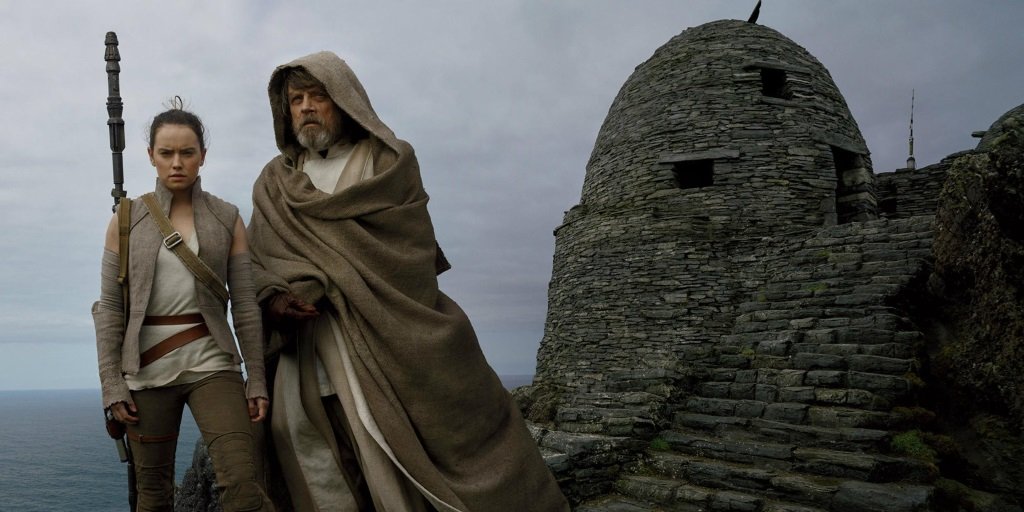 Star Wars: The Last Jedi (2017, PG-13), the middle chapter of the third trilogy of the interstellar saga, sends Rey (Daisy Ridley) in search of Jedi master Luke Skywalker (Mark Hamill). Writer/director Ryan Johnson brings heart to the spectacle and impresses with some stunning imagery and he guides Hamill and Carrie Fisher (who died soon after completing her scenes) to performances weighted with gravitas. Johnson comes to the film as a fan as well as a filmmaker eager to bring his own vision to the series and he creates one of the best chapters in the science fiction epic to date. This may be your antidote to the disappointment over Solo. Now streaming on Netflix.

Hugh Grant is Jeremy Thorpe, the British political leader accused of conspiring to murder his gay ex-lover (Ben Wishaw), in A Very English Scandal, a BBC miniseries inspired by the salacious 1979 scandal and courtroom trial. Writing for The New York Times, Margaret Lyons proclaims it “a juicy, wild lesson in British queer history, a story that’s able to hold a sense of moral fury toward the hatred that gay and bisexual men (and women) faced while still finding the tabloid outrageousness at hand titillating. A Very English Scandal is a dazzling three hours and in pace and potency puts The Crown to shame.”

Stephen Frears directs the satirical drama written by Russell T. Davies (creator of Queer as Folk and the Doctor Who revival), which debuts on Amazon Prime Video.

With the documentary Won’t You Be My Neighbor inspiring audiences in theaters, revisit original episodes of the gentle children’s show with The Best of Mister Rogers’ Neighborhood (1968-2000). Episodes spanning over three decades of the series are available on Amazon Prime Video.

There’s a world of TV out there and MHz Choice offers some of the best dramas, mysteries, comedies, and crime thrillers from Europe. Their offerings include the World War II drama A French Village and cop thriller Spiral from France, Scandinavian crime dramas Arne Dahl and Beck from Sweden, and Detective Montalbano from Italy. Recently added to the service are Agatha Christie’s Criminal Games (adapted from Christie’s stories) and the three-part nature documentary Antarctica from France. All shows presented with subtitles. There’s a 30-day free trial if you’d like to sample the international menu.

GLOW: Season 2 brings Allison Brie and her crew of 1980s women wrestlers back for more comic melodrama in and out of the ring as the Gorgeous Ladies of Wrestling pilot gets shopped around to TV stations.

Foreign affairs: in the romantic comedy To Each, Her Own (France, 2017, with subtitles, not rated), a lesbian woman (Sarah Stern) struggles with her attraction to a man just as she’s ready to come out to her conservative Jewish family. Also new:

The sweetly offbeat The Strange Little Cat (Germany, 2014, with subtitles) celebrates the strange magic of everyday life and the odd dimensions of human behavior that arise in the close quarters of family apartment in Berlin.

A UN secretary (Ben Kingsley) gives lessons in Backstabbing for Beginners (2018, R) to a young diplomat (Theo James) in the drama about international corruption inspired by real events.

Streaming TV: The Wire, created by David Simon for HBO, is one of the most intelligent and complex shows ever made and Prime Video has the entire five-season series once again. Also new:

Cult: Giulio Questi’s Death Laid an Egg (Italy, 1968), with Jean-Louis Trintignant as a serial killer running a high-tech chicken farm, is one of the strangest mixes of murder mystery and social satire to come out of Italy. Also newly arrived:

Martin Scorsese directs the riveting thriller Shutter Island (2009, R) with Leonard DiCaprio investigating the disappearance of an inmate on an island hospital for the criminally insane (Prime Video and Hulu).

Zoe Saldana and Imogen Poots star in I Kill Giants (2018, not rated), a drama about a teenage girl who escapes loneliness in a world of fantasy. Also new:

Available Saturday night is IT (2017, R), the hit horror film based on the Stephen King novel about adolescent best friends battling a demonic clown.

TCM Select Pick of the Week is John Ford’s western classic The Searchers (1956). Ford directed John Wayne in thirteen films over the course of their careers, but they reached their respective creative pinnacles with this tormented epic starring Wayne as Ethan Edwards, a dark, vengeful drifter on an obsessive mission of vengeance against the renegade Indian chief who slaughtered his family and kidnapped his niece. Jeffrey Hunter, as his part-Indian adoptive nephew, joins the search for his sister (Natalie Wood) and becomes the hateful Ethan’s conscience. It’s Ford’s frontier American Dream at its most ambivalent, an epic journey imbued with sadness and saved by love. It’s been called the greatest American movie ever made and Martin Scorsese, George Lucas, Steven Spielberg, John Milius and many others have paid homage to it in their films. Ford and Wayne pay tribute to the great silent star Harry Carey, who starred in Ford’s earliest westerns and inspired Wayne’s acting style, in the film’s legendary final image. Streams through December 20, 2018.

Co-star Natalie Wood is FilmStruck’s “Star of the Week” with a spotlight on 13 features starring the actress, from The Star (1953) with Bette Davis to final film Brainstorm (1983, PG) with Christopher Walken.

The British comedy Trivia: The Complete Series follows a pub quiz team as they compete for the trivia championship.

The second season of the Facebook Watch original dramedy Strangers moves to New York City and a whole new culture of roommate situations to navigate.